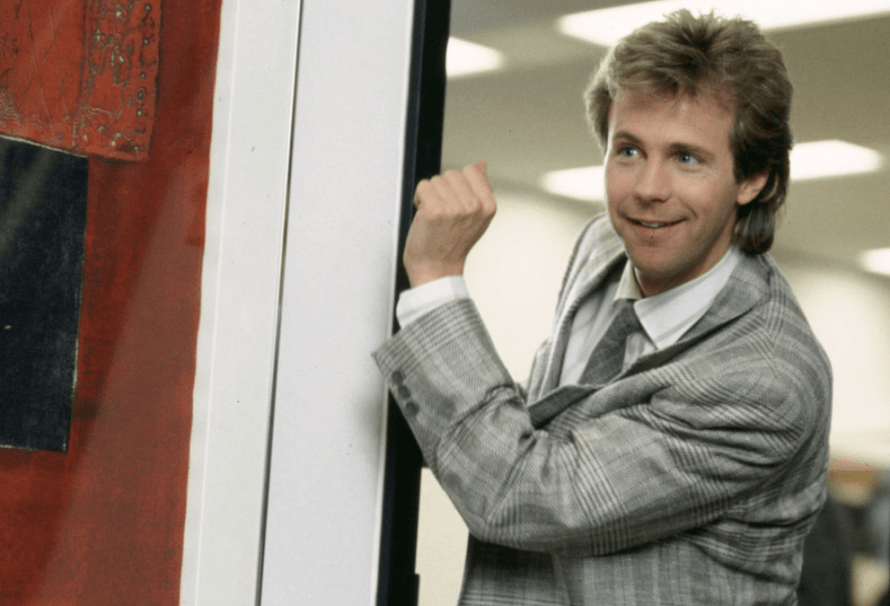 Typecasting is a dirty word for many performers, especially an actor. It implies that their abilities are limited to a small number of roles, when most decent actors have the range to play a wide variety of parts. Yet there’s always the “business” part of show business to consider, and selling a performer to audiences often requires familiarity. The actor’s battle to find a type–let alone break into a new one–is one that not every performer, even a star, can win. This was the precise battle facing Dana Carvey in 1990, when he took on his first leading role in the film Opportunity Knocks. That movie would kick off a series of pictures that each attempted to redefine the actor for audiences as a leading man, a status Carvey would unfortunately never quite achieve.

Carvey had become a celebrity thanks to a successful stint on “Saturday Night Live,” but already had a nascent film career before becoming part of that show’s cast, playing bit parts in big films like 1981’s Halloween II (his very first cinematic role, cementing his career’s ties to someone named Michael Myers early), and 1984’s This Is Spinal Tap, culminating in his supporting role in 1986’s Tough Guys, the same year he debuted on SNL. Carvey became a household name through the sketch show thanks to his large roster of impressions and character voices, and, given his popularity and acting background, a starring vehicle seemed inevitable. The problem was what that vehicle would look like; Carvey’s impressions and characters on the show were a bit too thin to build a narrative around, but clearly he believed they needed to be included somehow—the trailer for Opportunity Knocks prominently features an appearance by Carvey’s SNL “Church Lady” character, even though she does not appear in the film.

What Carvey and the filmmakers (including director Donald Petrie, fresh off of 1988’s Mystic Pizza) came up with was a jumbled hodge-podge of late ‘80s comedies, mixing together the suburban Chicago films of John Hughes, yuppie rags-to-riches flicks like Trading Places (1983) and The Secret of My Success (1987), and grifter comedies like fellow SNL alum Steve Martin’s Dirty Rotten Scoundrels (1988). In Knocks, Carvey plays a con artist who takes on the identity of a snooty uppercrust executive and, after ingratiating himself into the family of hand dryer magnate Milt (Robert Loggia), is convinced by his grifter parental figures to play a “love con” on Milt’s doctor daughter Annie (Julia Campbell). Some fast talking fish-out-of-water bits are fairly successful, while other scenes forcing Carvey’s impressions into the film are decidedly not–especially as those impressions are either of people of color (a part of Carvey’s schtick that would rightfully not fly today) or, as in one egregious scene, Carvey’s hit SNL impression of George HW Bush. When the film finally settles into a character-based romantic comedy, however, Carvey comes into his own, creating a screen persona that’s Michael J. Fox or even Jimmy Stewart-like in its earnestness. It’s a star debut that seems to promise greater things to come, requiring just the right mixture of material to exploit the affable leading man qualities Carvey clearly possesses.

Unfortunately for that inner leading man, but fortunately for Carvey’s career overall, he made both Wayne’s World films (1992 and 1993) next. They made him a full-fledged movie star, albeit in a supporting role to Mike Myers’ titular character. The nascent leading man version of Dana Carvey wouldn’t return until 1994’s Clean Slate, a film noir pastiche featuring Carvey as a gumshoe who suffers from Korsakoff’s Syndrome, meaning that he loses his short-term memory every time he falls asleep. Directed by Mick Jackson (who had just made the hit The Bodyguard in 1992), the film was originally developed for Robert Redford, an indication that it was intended as more than a showcase for an SNL star. The promise of Carvey as leading man comes to fruition here, as he’s credible as a romantic lead, a pitch perfect comedian, and a well rounded character with nuances.

Best of all, Carvey is able to insert some of his goofier schtick without stopping the movie cold or tearing it away from the tone the rest of the film establishes, making Clean Slate for him what The World According To Garp (1982) was for Robin Williams or The Truman Show (1998) was for Jim Carrey. Sadly, the movie landed with a thud critically and commercially, grossing less than half its budget. Carvey himself was dismissed by critics, with Entertainment Weekly’s Owen Gleiberman claiming he possessed a “rubbery blahness” as a star. The same year Clean Slate was released, Carvey appeared in two other ill-received films (The Road to Wellville and Trapped in Paradise) in supporting roles, which helped further truncate his leading man status.

Carvey’s final attempt at creating a leading man career was 2002’s The Master of Disguise, a movie which perfectly recalls that particularly heinous era in pop culture. No doubt spurred on by the success of SNL peers Mike Myers and Eddie Murphy, who had created broad comedy franchises of their own in Austin Powers (1997) and The Nutty Professor (1996) respectively, Carvey concocts an excuse to put his shtick into overdrive with a story about a family of superheroes-cum-wizards whose superpower is disguising themselves as anyone or anything. While the possibilities for Carvey to parade around as a number of caricatures (including more unfortunate POC stereotypes and, sigh, another Bush) are taken advantage of (and then some), the actor lays it on too thick by portraying his “normal” leading character, Pistachio Disguisey, as an insufferably nerdy goofball whose primary trait is mocking other people.

After his prior leading roles, Pistachio seems almost hateful in concept and execution—he’s a character that the filmmakers know is obnoxious, but hope becomes endearing anyway. He never does. What’s most unfortunate about the film (and there is a lot), is that it feels as if Carvey willfully abandoned the screen persona he was attempting to establish as a lead, and instead callously pivoted to a schtick that was always too broad and too thin to expand upon.

After Master’s failure, Carvey essentially retired from acting to focus on his family, popping up every now and then in a voiceover role or guest spot. Thanks to his body of work, he’ll never be regarded as an obscure artist, and yet there exists evidence that there was something else about him trying to escape from his relegation to the small screen and side characters that we never got to see—the bright spots of uniqueness in his first two leading roles, as well as his little-known sketch series “The Dana Carvey Show” (which launched the likes of Stephen Colbert and Charlie Kaufman), seem to prove as such. While these works are still around and ripe for rediscovery, it’s a shame that Carvey’s career ultimately wasn’t a little more—cue the Church Lady voice—special.

Belle & Sebastian Go to the Movies

Why Young Actors Are Addicted to Addiction Movies

REVIEW: Quentin Tarantino’s Once Upon a Time … in Hollywood