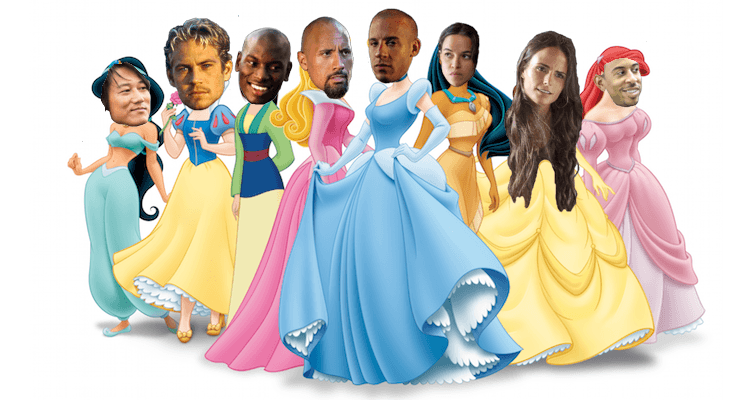 (Editor’s note: Please enjoy this transparent attempt to get traffic by combining two of the Internet’s favorite things. There’s plenty more where this came from!)

Which Disney Princesses Would the ‘Fast and the Furious’ Movies Be?

The Fast and the Furious = Snow White 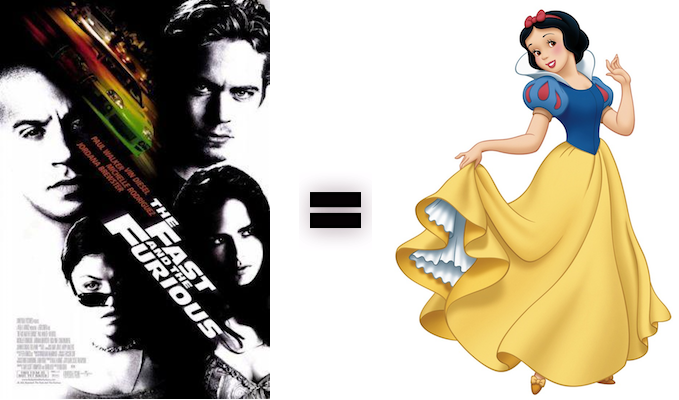 Every cultural movement has to begin somewhere. Sometimes, as in the case of animation pioneer Walt Disney in the 1930s, it begins with a nineteenth century German fairy tale. Other times, as with XxX visionary Rob Cohen, it begins with an article in Vibe magazine about illegal street racing. But the OG Fast and Furious film and Disney’s inaugural princess don’t just have humble beginnings in common. Snow White’s entire journey hinges on being “the fairest of them all,” a title that undercover cop Brian O’Conner and burly blue-collar crook Dominic Toretto spend the better part of six movies trying to claim, especially in this first entry. Snow has her loyal family of the seven dwarfs, just as Dom has his crew, made up of actual family members like his sister Mia, as well as friends and lovers like his girl, Letty. Snow White is generous and trusting, unable to see the threat posed by the the Queen’s poisoned apple, just as Dom welcomes Brian into his family, not discovering his hidden agenda until it’s too late. But there is hope, for just as Snow finds her Prince Charming, Brian gives Dom his 1995 Toyota Supra in order to allow him to escape.

Bright lights, lush colors, a sense of independence and a whole lot of fun: oh yeah, Princess Jasmine is 2 Fast 2 Furious. Jasmine is a fiercely independent woman, determined to marry only for true love, and 2 Fast similarly refuses any attachment to its predecessor, the laws of physics, or basic grammar. The film’s Miami locations could easily double for the opulent Arabian palaces that Jasmine inhabits, with sunshine soaking into every frame. Just as a wily pickpocket by the name of Aladdin captures the princess’ heart, 2 Fast introduces Roman Pearce, who early on picks the pocket of the evil drug lord Carter Verone. Jasmine has to contend with her suitor Jafar’s pet parrot, Iago, who chews through scenery, while Brian and Roman have to contend with watching Verone’s pet rat chew through a character actor. The princess is never the same again once she takes a magic carpet ride, soaring through the air, just as the Fast series entered “A Whole New World” after Brian sent his Yenko Camaro soaring through the air and landed it on top of a yacht.

The Fast And The Furious: Tokyo Drift = Ariel 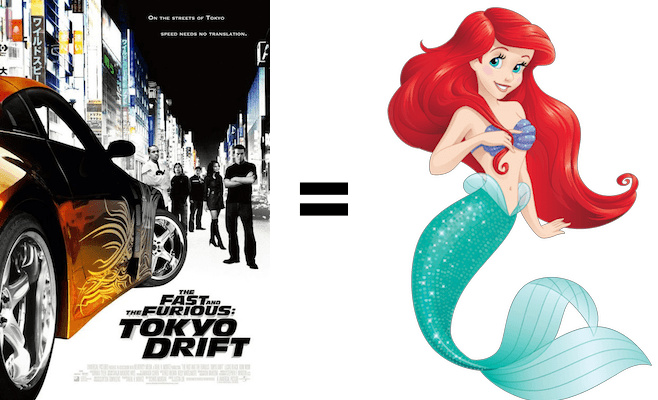 A rebellious, disobedient, endlessly curious teenager is banished from home to a land where all the rules and customs are different, a land that they fall absolutely in love with. Am I talking about Ariel from The Little Mermaid, or am I describing the plot of The Fast And The Furious: Tokyo Drift? Oh dang! I’m talking about both! As a denizen of the mermaid kingdom who yearns to visit the world of humans that live on land, Ariel is both an outcast and unique. Similarly, Tokyo Drift is unique, in that it doesn’t concern the tales of Dom, Brian, or their band of merry criminals (at least not at first, and not beyond a brief cameo from Vin Diesel). It’s also an outcast, for not until the end of Fast & Furious 6 is the film brought back into continuity. Just like Ariel, the film has its own unique voice, and would be left with nothing if it were taken away. Tokyo Drift is different from the rest of the Fast saga, seemingly destined to never be part of their world, but makes it there in the end. 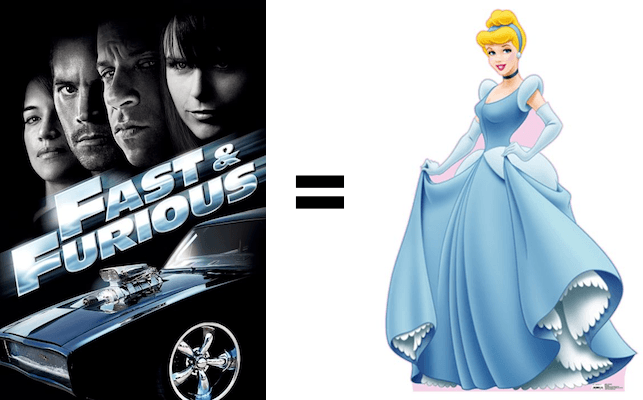 Constantly tormented, put upon, forced to set the table for the others…yep, this fourth installment is definitely Cinderella. In a series that keeps getting better with each film, there was always going to be one that gets left behind while the rest go to the ball, and F&F is it, no matter how many crafty drug lords are driven through secret tunnels beneath the U.S.-Mexico border. Despite its “oh yeah, forgot about that one” reputation, the movie has its Fairy Godmother in the form of director Justin Lin, who directed Fasts 3-6. He kept the saga going when it seemed to many that it was headed straight to the direct-to-video bins, and gave the adventures of Dom & Co. a glass slipper of a movie that would subsequently transform the series into a beautiful, shimmering ball gown. Of exploding cars. 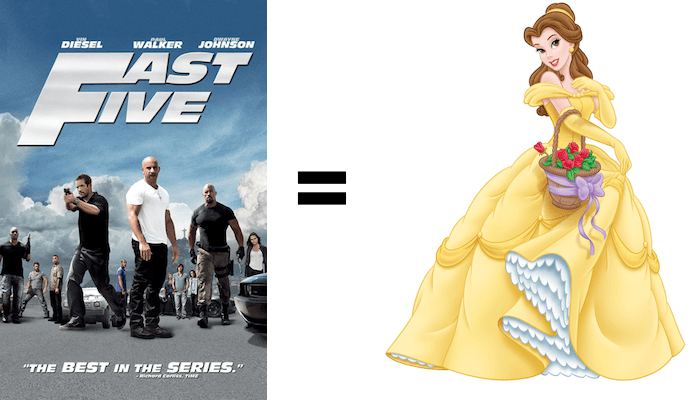 Just as the people of her small provincial town cannot fathom the “odd” bookworm-y qualities that Belle possesses beneath her beautiful exterior, most stuffy film critics are reluctant to believe that beneath scenes of dragging a giant safe through the streets of Rio de Janeiro, Fast Five possesses a brain. Belle not only has an understanding of the outside world, but finds herself in the exciting magic of the Beast’s castle, just as FF extends its worldview for the first time (at least since Tokyo Drift) beyond the U.S. to South America and all the exciting danger within. Belle learns the value of teamwork thanks to the Beast’s human servants turned animated objects, just as Dom, Brian, and Mia can only stop a local crime lord and steal his money with the help of a team. Belle must also deal with the misguided Beast hunter Gaston, and so too must our merry band of criminals deal with DSS agent Luke Hobbs, who is focused on hunting them instead of the real threat. But hey, that throw-down between The Rock and Vin Diesel is pretty Beast-ly. 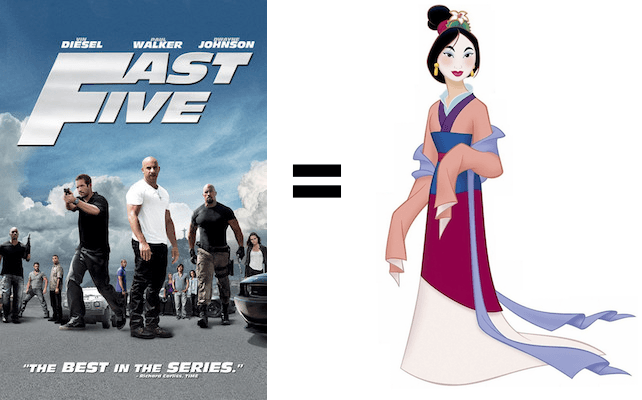 In order for her family to survive, Mulan must go to war. In order for the Fast & Furious films to remain vital, they, too, must go to war. Fortunately, this sixth installment is as adept at combat as Mulan is, as convoys are stopped, tanks are toppled, and an entire cargo aircraft is brought down. Mulan tries in vain to prevent the Huns from capturing the Emperor, but cannot convince her fellow soldiers of their treachery, just as Dom and the team are blindsided by the treachery of a brainwashed Letty as well as an additional mole inside the DSS, planted there by psycho special ops soldier Owen Shaw. No matter who betrays them, however, the team’s hearts are as true as Mulan’s is. She will do anything for love of her family, just as Dom will. In his case it just means catching Letty after she falls off a tank in midair while jumping over a highway. 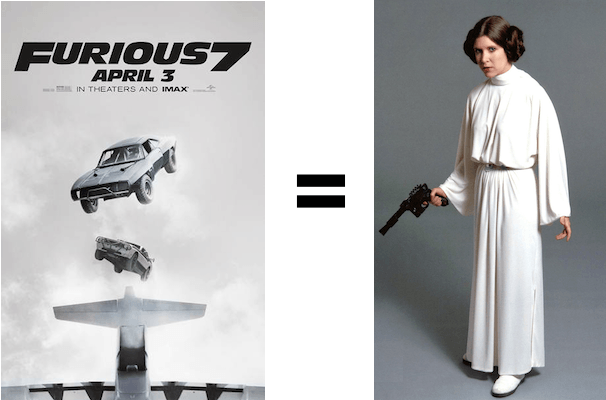 Ohhhhhh snap! What a twist! That’s right, people, Leia is a bonafide Disney princess now, look it up. And the timing couldn’t be more perfect, because Furious 7 is when the series finally goes to space, Leia’s natural habitat. OK, fine, they don’t literally go to space, but come on: the team launch their cars onto a mountain road from a cargo plane 3,500 feet above the ground, not unlike a squadron of X-Wings would launch against the Empire at Leia’s command from a hidden Rebel base. The team have to stop a device known as the God’s Eye from falling into the wrong hands, a piece of tech that sounds like it could be a cousin to the Splinter of the Mind’s Eye that Leia once hunted down (if that’s still canon, that is. Lucasfilm, call me). The film epitomizes Leia Organa in every way, for like her, it’s loyal (hello, Lucas Black from Tokyo Drift), reckless (Dom defeats Shaw’s brother by killing a helicopter with his car), and diplomatic (bringing new director James Wan over from the horror genre). And don’t forget her signature sarcastic wit, which accounts for 90% of the dialogue between Roman and Tej.

The Fate of the Furious = Elsa 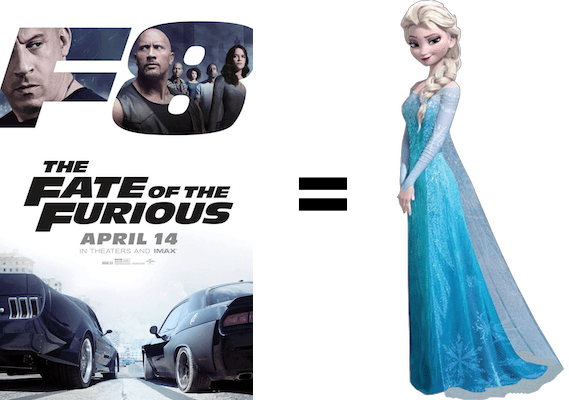 At the time of this writing, your humble author has yet to see the eighth wonder of the world. I also haven’t seen the eighth Fast and Furious film. But I have an inkling, given the trailers and commercials, what princess might be appropriate to use here. Let’s see: a rift between family members, an ice-queen villain, a chase occurring over a huge frozen lake that is then destroyed by a giant freakin’ submarine? Yep, I’m thinkin’ Elsa. I hope Dom gets to sing “Let It Go.”