“A society should be judged not by how it treats its outstanding citizens,” wrote Dostoyevsky, “but by how it treats its criminals.” Genre cinema from across the globe often provides such insight through penalizing transgression rather than illuminating virtue. Across a number of titles at Fantasia Fest, what filmmakers of many nationalities and languages deemed worthy of punishment provided fascinating insights into the world as it stands at the turn of the decade. (I’m no expert on Russian literature, so maybe I’ve woefully misinterpreted this passage — don’t @ me if that’s the case.)

Take The Incredible Shrinking Wknd, from Spain. What looks on paper like a retread of Groundhog Day becomes so much more in the hands of writer-director Jon Mikel Cabrero. After the aimless Alba (Iria del Río) follows a red ball down a river on her rural weekend getaway, time stops and thrusts her back to the moment she arrived at the country house. At first, she assumes the bizarre replay is a bad hangover. But when it happens again, and again, without warning, Alba finally realizes that she’s stuck in a loop and has an hour less each time she starts over. The lackadaisical thirtysomething in the “Eternal Summer” T-shirt must learn quickly about something else eternal — recurrence.

With each new iteration of her timeline, Alba must become thriftier with the depleted hours allotted to her by the cosmos. She figures out tricks to alert herself to how many hours she’ll have each go-round. But more importantly, Alba learns to take ownership of her situation and take initiative instead of letting life and love pass her by. Cabrero does not present the time travel as a puzzle she can solve like Harold Ramis did for Carl Loomis, however. The friends who accompany her on the trip do not always act in ways Alba can predict, leading to an increased sense of confusion and desperation on her part. All she can do is fix herself, and, as punishment for her prior sloth, the cruel mechanics of time lead to some reform.

Or take Hirotaka “Otsuichi” Adachi’s Stare, from Japan, which examines a punishment that befalls an entire group of people rather than just one individual. “J-horror,” as many genre fans colloquially refer to it, has often led the way in using horror as a vessel to explore our relationship with technological advancements. This film marks another proud addition to the tradition as it uses possession and disfiguration to portray the dangers of the smartphone era. While its eyeless murderer’s gaping holes (perhaps so large as to take in more in a single glance from a screen) suggest a modern-day analogue to “the boy with square eyes” suffering televisionitis, Otsuchi’s horror is far more nuanced. Besides, the eeriest sight in the movie might not be a bloody slaying — it’s two young people, shot dead center in the frame, awkwardly flirting and worrying about what someone’s death will do their social media like counts.

Stare is far from your Baby Boomer relative sharing a “not a cellphone in sight, just people living in the moment” meme on Facebook without understanding the irony. It’s not just a morality lesson wrapped up in jump scares. Otsuichi does not stop with the obvious conclusion that cellphones and the internet are bad. Instead, his film pinpoints the omnipresence of meaningless details on social media as the culprit. The villain of Stare, Shirai-san, does not target her victims based on anything they’ve done. Rather, her trail of victims has their eyes exploded by her because of what they know, making the mere possession of information the basis of punishment and its dissemination an act of potential mortal danger. 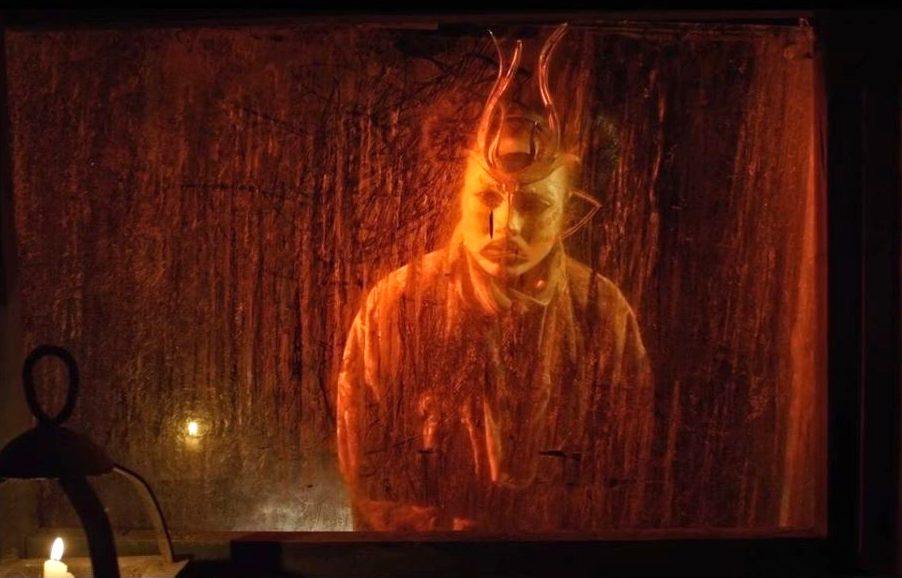 Not all films at Fantasia were quite so forthcoming with their diagnoses of societal malaise, though, as evinced by the Kazakh film Night God. Adilkhan Yerzhanov’s post-apocalyptic story feels like a 113-minute interpretation of the final two lines in T.S. Eliot’s poem The Hollow Men: “This is the way the world ends / not with a bang but with a whimper.” There’s no cause given for the collapse of civilization, the destruction of all buildings and the pervasive nihilism of the “eternally ending world.” The malaise just exists, and Yerzhanov simply invites the audience to share in the darkness. Punishment for him in the film is not redemptive or instructive – it’s an unavoidable fact of life that must be endured.

For a film that takes place in a world teetering on the brink of extinction, Night God is notably void of open conflict. Yerzhanov stages the violence offscreen, not even granting the audience access to its horrifying and occasionally cathartic effects. While there is still dramatic tension in the film as a father and daughter enter a town and survey the decaying fabric of society, it’s not the point. Night God inhabits a space where most people have ceased to fight altogether, positing a world where the prospect of annihilation has inspired more resignation than resistance. All those willing to stare fearlessly into this abyss will find that Yerzhanov’s impeccable attention to detail, from the low throb droning consistently in the soundscape to the tactile sets that feel inhabited well beyond what’s observable in the frame, makes for a haunting experience.

While far less brutal to watch, Irish writer-directors Enda Loughman and Mike Ahern provide a no less damning assessment of humanity in their paranormal comedy Extra Ordinary. The protagonist, Rose (Maeve Higgins), works as a driving instructor to get away from her past life, where she dabbled in the occult with her father, a TV medium. She’s quickly snapped back to this shameful chapter by a student, Martin Martin (Barry Ward) who seeks her out specifically in the wake of some bizarre activity in his household. What’s abnormal is his possessed daughter floating in the bedroom, a spell for which he seeks Rose’s council to break. But what’s shockingly normal, however, is that the ghost of Martin’s wife still roams the household making her presence known and keeping many an activity running smoothly.

Some of the hijinks that follow in Extra Ordinary are a little silly, particularly when they involve washed-up rocker Christian Winter (Will Forte). Yet that doesn’t take away from the fascinating premise set up by Loughman and Ahern. The duo keys in on the absurdity of letting the dead dictate the day-to-day life and routine of a widower and his daughter. In essence, it is the living who hold onto the dead and the supernatural for stability in Extra Ordinary, a clever subversion of the genre’s tropes.

As Rose’s dad insists on one of his VHS tapes, the role of the living is to accelerate “stuck” ghosts finding their way out of the world. This makes for a cheeky, albeit still haunting, expression of a tough reality: we are all in the dying business. While Extra Ordinary might not posit tending the dead as a “punishment” for the living, the very foundation of the film serves as a reminder that what it means to be alive is heavily defined by its inverse of being dead.

Perhaps it’s fitting to return to The Incredible Shrinking Wknd here, a film that constantly revisits time itself, to hammer home the final conclusion taken from a cross-cultural panorama at Fantasia Fest: Changing the course of the future is possible with work, but dealing with the legacy and lingering issues of the past is inevitable.