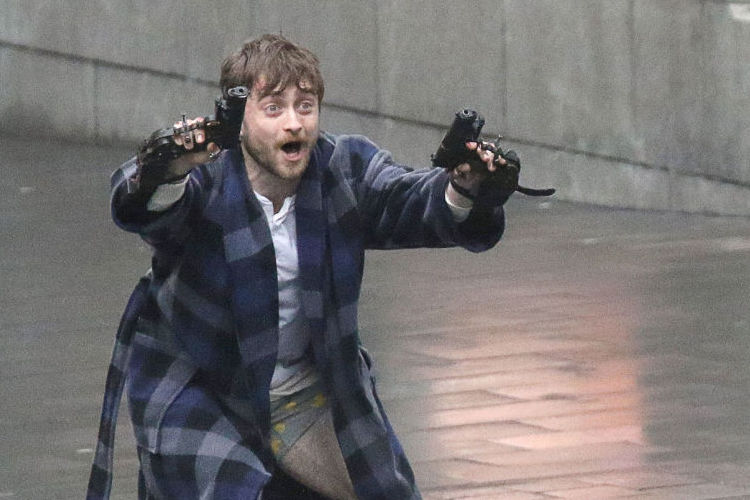 One simply cannot deny that the former Harry Potter, aka Mr. Daniel Radcliffe, has done a fine job of choosing unique, offbeat, and even downright weird scripts in recent years. Between Horns, Kill Your Darlings, and Swiss Army Man, it’s pretty clear that this actor is willing to do all sorts of strange and amusing things for independent filmmakers. And now let’s throw the willfully bizarre, hyper-kinetic, and endlessly violent Guns Akimbo onto the list of oddball indie films that are immediately elevated by Radcliffe’s sense of humor and gung-ho willingness to be unconventional.

And then there’s Samara Weaving, a fantastic up-and-comer best known for a supporting role in Three Billboards Outside Ebbing, Missouri — although genre fans already know her from fun flicks like Mayhem, The Babysitter, and Ready or Not. Not only does she seem to be a natural talent (her dad is Hugo Weaving after all) but, just like Dan Radcliffe, she seems to have a good eye for choosing high-end “midnight movie” material.

So obviously it’s quite the entertaining blast to rocket through Guns Akimbo, an altogether insane amalgam of video games, music videos, early-’90s action flicks, and more than enough sarcastically bad-ass attitude to fill six more movies. Imagine a third Crank movie combined with Grand Theft Auto (or perhaps Borderlands), a handful of edgy comic books, and a bunch of old dance music and you’re halfway to understanding how insane this movie is.

Radcliffe plays an ineffectual “anti-troll” who takes to the internet to bait and trash the nastiest of online elements — until one fateful night when he makes an enemy out of the people at “Skism.” Skism is an organized death battle that’s broadcast online, and their number one killer is named “Nix” (played by Samara Weaving). Radcliffe and Weaving are then forced to battle to the death all across the streets, warehouses, and alleyways of Shrapnel City. Yes, I said Shrapnel City.

In the hands of many filmmakers a concept like this would quickly devolve into a tiresome series of action sequences, dreary characters, and drab volleys of wheel-spinning plot exposition — but fortunately the director on hand is Jason Lei Howden, a crazy Kiwi filmmaker who delivered the enjoyably insane Deathgasm a few years back, and seems fully intent on continuing to deliver over-the-top violence and unexpected humanity laced with generous doses of rockin’ tunes and a dark sense of humor that often cuts right through the sheer ridiculousness of what’s happening onscreen. In other words: a virtually perfect midnight movie if you’re at a festival — or just hanging out with a few friends and your favorite legally acquired intoxicants.

There are so many broad, pulpy, weird B-movies that aim for “so bad it’s good” and fail miserably. In order to make a high-quality, low-budget, super-violent purely pulp action flick that actually works on the whole you need filmmakers who know what they’re doing. Guns Akimbo is evidence of filmmakers who not only know how to make good movies; they also wear all of their insane, colorful, and playfully nasty influences right on their sleeves — and in this case that’s just a whole lot of fun to watch.

Review: Feast of the Seven Fishes

‘Unbreakable’ Through the Eyes of Someone with Osteogenesis Imperfecta