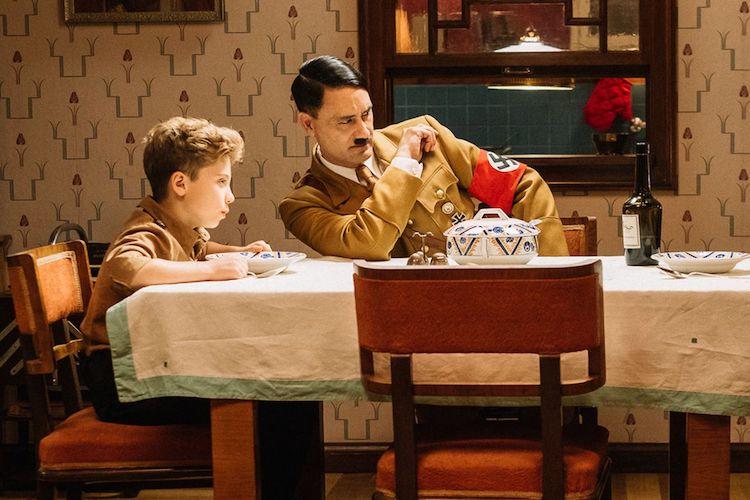 The attention-grabbing pitch for Jojo Rabbit — a little German boy near the end of World War II has an imaginary friend, and it’s Hitler — is ultimately secondary in importance to the film’s more serious, sentimental themes. That the film, adapted and directed by Taiki Waititi from Christine Leunens’ novel Caging Skies, uses dark humor to mock the absurdity of Nazism AND takes the Nazi atrocities seriously may make it an uncomfortable fit for some viewers, and I don’t begrudge anyone who’s not interested in a whimsical comedy about Nazis, no matter how good or well intentioned. But if you can take some rough chuckles, starting with imaginary Adolf coaching the lad on how to deliver a “Heil, Hitler!” with gusto (“Don’t overthink it. You’re overthinking it”), it’s a wonderfully spirited and deeply humane story that revels in ridiculing antisemitism and small-mindedness.

Our 10-year-old hero, Johannes “Jojo” Betzler (Roman Griffin Davis), is a timid boy in 1945, fully committed to the Hitler Youth program but taunted by the other kids for his lack of machismo and his absent father, who is rumored to be a deserter. He gets the “rabbit” nickname when he hesitates to kill a defenseless animal on the orders of Capt. K (Sam Rockwell), the boozy, one-eyed Nazi who runs the youth training camp, and he’s left with scars after an attempt at bravado literally blows up in his face. His mother (Scarlett Johansson) is loving and devoted, but his gentle, supporting imagined version of Adolf (played by Waititi) is his real confidant and cheerleader.

What’s funny about the situation is that it’s not the real Adolf Hitler following Jojo around giving him advice and encouragement, but “Adolf Hitler” as filtered through Jojo’s 10-year-old mind, an Adolf who’s no smarter, knowledgeable, or mature than Jojo is. When Jojo discovers that his mother is hiding a Jewish teenage girl, Elsa (Thomasin McKenzie), in their house, he’s terrified because of all the things he’s been taught about Jews’ supernatural powers — and his Adolf is just as scared, agreeing with him that they should heed her threat not to reveal her hiding place or she’ll behead him. “Hitler,” it seems, has never actually encountered a Jewish person.

The real story is about Jojo gradually learning that Elsa is not an evil reptilian monster (“We’re like you, but human,” she deadpans) while struggling with his conflicting loyalties to his mother and his Fatherland. Meanwhile, he continues youth training with his gentle-souled best friend (Archie Yates) and develops something like a friendship with Capt K, whose bitterness at having to babysit instead of being on the front lines is matched only by his certainty that Germany is about to lose the war (he’s right, spoiler alert).

Waititi peppers the fringes of his screenplay with funny side characters (Rebel Wilson as Capt K’s assistant, Stephen Merchant as a Gestapo leader) and throwaway jokes related to the Third Reich. His own performance as imaginary Adolf is full of simpering softness, making Mr. H. a laughable buffoon. But there are also moments of bracing, sudden somberness, when the realities of Nazi Germany are confronted. This mixing of the satirical and the historical will be jarring for some viewers, perhaps a complete turnoff. That’s fair, and I don’t begrudge anyone who doesn’t like the sound of any of this, who doesn’t want to hear even comically exaggerated antisemitism. But for me the underlying sweetness of the Jojo/Elsa story and the delightfully silly humor of Waititi’s script were a near-perfect blend of comedy and drama. It sounds strange to say you found the Hitler comedy so rewarding, but we live in strange times.