“They were careless people, Tom and Daisy — they smashed up things and creatures and then retreated back into their money or their vast carelessness or whatever it was that kept them together, and let other people clean up the mess they had made.” — F. Scott Fitzgerald, The Great Gatsby

As the chasm grows between those who can’t afford to visit the dentist and those who spend a year’s worth of Ivy League tuition on a handbag, it is pertinent to re-examine films about the wealth and greed. 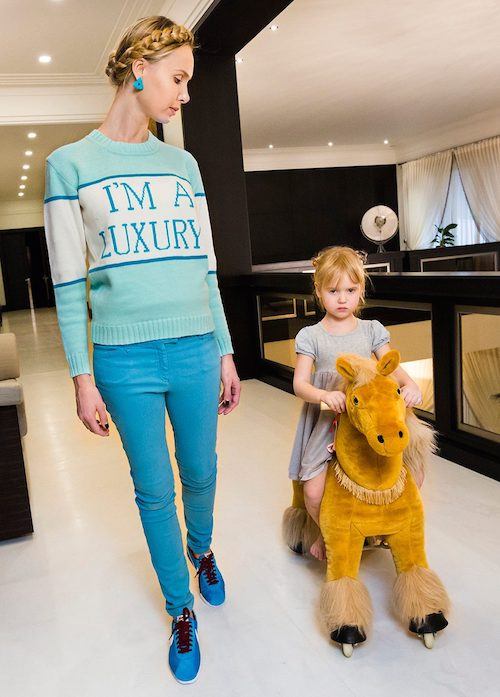 The most recent is Lauren Greenfield’s documentary Generation Wealth, which casts an unflinching eye at the outrageous prices people pay to maintain their sumptuous lifestyles — from $20,000 Birkin bags, to private in-home tanning beds, to plastic surgery for dogs. Greenfield examines the hackneyed but true adage “money can’t buy happiness” by candidly delving into the psychological conflicts behind her subjects’ avaricious spending habits. No matter how many material objects they obtain, they are never satisfied. There is a vast disparity between the lofty image they project and the profound dissatisfaction and loneliness that lurks inside. Dressed in a bright pink tulle dress with Shirley Temple-esque ringlets, cherub-faced pageant queen Eden Wood asserts with a steely-eyed stare: “I would have money as big as this room. And kiss it” — an eerie foreshadowing of the next wealth-obsessed generation.

Nearly 10 years ago, Greenfield examined the Siegel family, the multimillionaire owners of the Westgate resorts, in her documentary Queen of Versailles. Greenfield unfolds their almost carnivalesque pursuit of the most ostentatious lifestyle possible. Their myopic, moneyed view of the world is absurd, such as when Jackie Siegel complains that her 10-person family is “bursting out of the seams” in their current mega-mansion. To assuage these devastating spacial issues, Jackie aims to construct one of the largest and most expensive single-family “houses” in the United States. At 90,000 square feet, it is more like a real-life Richie Rich palace, complete with 30 bathrooms, 10 kitchens, a bowling alley, ice-skating rink, and even a baseball field.

But the Great Recession of 2008 comes catapulting into the Siegel’s dreams like a giant wrecking ball, turning their life into what David Siegel sardonically dubs a “riches to rags story.” Struggling to cope with their reduced income, the Siegels are forced to sell their lofty castle for a mere $100 million. Some of their downfall is played for laughs, like when Jackie rents a car and asks who her driver will be, but for the most part Greenfield admonishes and pities her subjects. When they must let a few of their multiple nannies and housekeepers go, their home becomes a grubby, horrifying pigsty where pets are left to die and dog shit piles on the floor. Perhaps having a four-bedroom house would be a lot more manageable for the Siegels.

One of the most wretched moments in Queen of Versailles is when Jackie, in an attempt to save money, purchases Christmas presents at Wal-Mart. She grabs as many toys as she can without even looking, putting zero thought or heart into the gifts she is giving her children. When she returns home, one of the nannies puts a newly minted bike in the garage where it sits among at least 20 untouched others of the exact same kind. Toward the end of the documentary, Greenfield asks Mr. Siegel, who is sitting on a colossal and outlandish gold throne, what his hopes for the future are. “A plane. A yacht,” he stoutly replies. He does not wish for anything having to do with his family or any kind of human experience — he just has an insipid desire for more things. But it is never enough. One of Jackie Siegel’s former neighbors attests that “the American Dream is rising way up above what you started with.” But how much is too far? There is a stark line between living a life improved and one of bloated, fanatical avarice. Queen of Versailles shakes its head in horrified and bemused disbelief at the Siegels’ profuse spending habits and strikes a deft balance between mocking and sympathizing with them.

Another female filmmaker who excels at exposing the lives of the rich and famous is Sofia Coppola. Her entire oeuvre probes the isolation and malaise that often comes with upper-class living. Her intimate and keen insight comes from her own privileged background as the daughter of one of the most famous directors in cinema history. Marie Antoinette (2006) transports us to the actual Versailles and turns one of the most reviled women in history into a sympathetic protagonist — a gloomy, lonely young girl alienated from her inordinate surroundings.

But soon the rewards of royalty intoxicate the melancholy teenager. Coppola translates Marie’s snowballing greed into a bubbly 1980s style montage of an endless parade of goodies (pastel-colored confections, jewel-encrusted high heels, and elaborate, ribbon-laced dresses … ) set to infectious modern pop hooks. Through this sumptuous, candy-coated mise en scène, audiences easily understand how the young queen became so swept up by the excess at her fingertips. 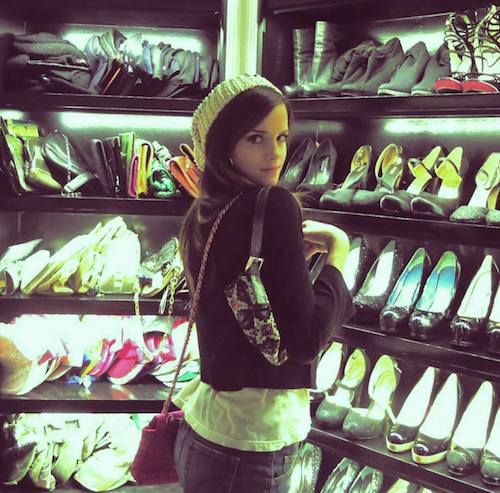 Coppola’s The Bling Ring (2013) focuses on a group of excruciatingly narcissistic and vapid girls who rob celebrities like Paris Hilton, Rachel Bilson, and Lindsay Lohan without remorse. They spend most of their time having lazy beachside afternoons or at nightclub ragers. The only form of parenting they receive is quotes from the New Age self-help guide The Secret. Coppola studies these girls with a documentarian eye, neither condemning nor judging them, but merely observing them in all their scandalous glory.

The scene inside Paris Hilton’s house is unsettling. The girls explore an entire room dedicated to her massive cornucopia of things: slinky high heels, sparkling jewelry, dresses in a rainbow of colors. There is so much that she cannot possibly know what she has, and there are not enough days in her lifetime to wear every single item. Caring little about the ramifications of their actions, the girls gleefully take photos of their stash and upload them to MySpace. The events of The Bling Ring were 10 years ago, but they foreshadow how social media would come to goad society’s insatiable hunger for such Midasian lifestyles.

In one of Martin Scorsese’s most audacious films, The Wolf of Wall Street (2013), he trumpets what happens when bottomless wealth mixes with toxic masculinity. Leonardo DiCaprio stars as Jordan Belfort, a small-time Long Island penny stocks dealer who becomes one of the most ruthless, conniving, and richest Wall Street brokers in history after defrauding legions of innocent families. (Between this, The Aviator, and The Great Gatsby, the role of absurdly rich but flawed man seems to be a DiCaprio archetype). From the frenzied opening shots of Jordan’s lunatic version of an office party — a dwarf tossed into a bullseye for $25,000 and a bevy of naked prostitutes cavorting around the desks — Scorsese blazons the berserk, bacchanalian lifestyle of Jordan and his white-collar cronies with the same manic and crooked energy of the cocaine and Quaaludes that Jordan endlessly consumes.

Some critics disparaged Scorsese’s three-hour frenetic epic and the glee with which it parades Belfort’s rampant drug use and casual sexism, accusing the director of crossing the thin line from satire to glorification. However, that overlooks integral scenes in which the sheen of Jordan’s hedonistic and insane lifestyle begins to lose its golden luster. After a Mediterranean vacation, Jordan stubbornly insists that his yacht captain head into an extremely volatile tempest with 50-foot waves. Amidst the yacht’s violent rollicking, Jordan demands his friend Donnie give him Quaaludes so that he doesn’t die sober. The massive and glamorous yacht eventually capsizes, but it can easily be replaced in the morning. The scene is both hilarious and harrowing, and almost too ludicrous to be true.

But Jordan’s wild life is truly stranger than fiction because his enormous wealth causes him to live as if there are no consequences — even death. Later, after his wife says she wants a divorce and custody of their child, Jordan punches her in the stomach, snorts a bulk of cocaine, and grabs his sleeping young daughter. Attempting to escape the mansion with her, Jordan nearly crashes into a brick enclosure, which could have easily injured him and killed his little girl. The scene is absolutely terrifying in its mounting tension, Scorsese’s unhinged, frantic camera, and DiCaprio’s volcanic performance. It ends with Jordan coming down from his drug-fueled, raging state staring into the rainy mist as his harried wife and their Spanish nanny comfort his daughter. Jordan’s picture-perfect life is nothing but a fraud, all of his money and excess obscuring his damaging addiction and vile nature.

All at once exhausting and exhilarating, grotesque and awesome, The Wolf of Wall Street is one of the best films about greed because it truly puts you in Jordan’s shoes, tempting you with the thrills of his freewheeling lifestyle then swiftly plunging you into its dark underbelly. The film forces you to interrogate your own complicity and identification with him.

Tony Montana from Scarface (1983) is the most iconic avatar of society’s copious materialism. “Don’t underestimate the other guy’s greed” narcotic kingpin Frank Lopez counsels Tony, but he forgets to heed that advice for himself as Tony usurps him as lord of the Miami drug kingdom. The inside of Tony’s mammoth mansion is like a tomb, his office drenched in ink-black walls with matching leather furniture ornamented in tacky gold. Brian De Palma films the space in tight, almost suffocating close-ups; when we do get a wider view of the room, all we see is a gaudy eyesore. These repellent surroundings suggest that Tony’s fixation with wealth is poisonous. As his lust for power grows, it distances him from humanity. His friendship with Manny wanes, he regards his sister as a possession that he can control instead of an autonomous person, and he loathes his former trophy wife Elvira because they always fight.

De Palma articulates Tony’s egotistical isolation with the overhead shot of him in an immense bubbly bathtub. After arguing with Manny and Elvira, Tony pouts and childishly reassures himself that he is the only person he can trust. While shouting this to the TV screen, the camera rises higher and higher to the ceiling. De Palma mocks Tony in this ascending shot as his tiny, isolated image swallowed up in the enormous bathtub undermines the powerful, dominating self he wishes to project. Tony is drowning in his superfluous success and there is no one there to save him. The world may be Tony’s but it is a lonely one.

At its core, Scarface is a harsh censure of greed, American ambition, and obsessive materialism, but many (mostly male) viewers misread Tony as a hero and his wealth as something to aspire to, despite De Palma’s insistence that Tony’s cupidity leads to a monstrous, lonely existence and ultimately his downfall.

These films hammer home similar messages about how true happiness is interpersonal and not monetary. Yet filmmakers continue to return to this theme again and again, suggesting that society’s desire for wealth is an innate part of human nature that we will never shake off. And as Laura Greenfield says in Generation Wealth, it seems to be even worse in this Kardashian, #richkidsofinstagram age. “Greed is good” Gordon Gecko once snarled in Wall Street, but these films prove that greed is also hideous, sad, thrilling, and utterly intoxicating.