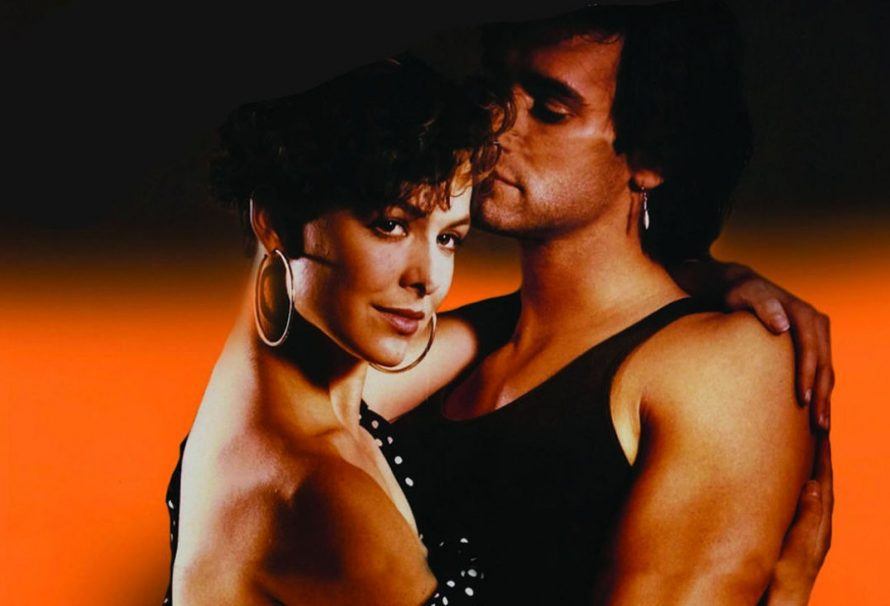 The date was March 16, 1990. The L.A. Raiders announced their return to Oakland. Janet Jackson won big at the fourth annual Soul Train Awards. Roseanne and America’s Funniest Home Videos were topping television ratings, and The Hunt for Red October and House Party were packing the multiplex. And that Friday, two competing motion pictures arrived in theaters, prints still wet from their rushed production – one, in fact, had completed photography less than two weeks earlier. Both were low-budget dance-ploitation pictures, hurried from conception to delivery in an attempt to capitalize on the next big dance craze, a saucy Brazilian confection called “lambada.” Yet critics lambasted both films, and audiences steered clear; most of the ink generated at the time merely asked the (not unreasonable) question of how and why there were two movies no one wanted, about a dance craze few had even heard of. The short answer, oddly enough, was that the Lambada movie derby was the result of an angry conflict between stubborn family members.

Manahem Golan and Yoran Globus were Israeli-born cousins who had migrated to America in the 1970s, acquiring the independent label Cannon Films in 1979 and running it throughout the following decade – and running it into the ground. Golan was the creative one, a seemingly bottomless well of exploitation movie ideas; Globus was the money guy, and together they perfected a system of pre-selling their high-concept pictures to international buyers (usually at Cannes, where they reigned supreme throughout the decade) and using those pre-sales to fund production. But by the end of the ‘80s, the company was living well beyond its means, and after a handful of expensive flops and accusations of financial chicanery, Golan resigned from Cannon to launch his own imprint, 21st Century Film Corporation (partially with funds guaranteed by his former company). Globus, however, stayed on with Cannon, which was absorbed by Pathé Communications. It drove a bitter wedge between the cousins and former partners, who would only communicate through lawyers; when Variety asked Golan about their relationship in May of 1989, he replied (“after a longer-than-usual pause of perhaps several seconds”), “Have you ever been divorced?”

Because they had been, per Variety, “the most visible combine in showbiz,” each man had something to prove without the other, and the best way to prove something was with a massive hit. So they tried to learn from their previous successes, and the Lambada films were a nakedly transparent attempt to replicate the success of their first giant Cannon hit, 1984’s Breakin’. That film capitalized on a new dance craze by cranking out a companion film at a rapid pace; “we have to do it fast,” Globus explained at the time, “because if we will not do it fast, somebody else will do it for us.” Breakin’ went from inception to theatrical release in an unheard-of twelve weeks, grossing $38 million on a $1.2 million budget; in a further spirit of striking while the iron was hot, its sequel (immortally christened Breakin’ 2: Electric Boogaloo) was in theaters within the same calendar year.

Golan and Globus were developing a Lambada picture together at Cannon before Golan’s departure (even going so far as re-hiring Breakin’ director Joel Silberg) – so now, in addition to the time pressure of preparing, shooting, and releasing a dance craze movie before the dance craze was over, the fiercely competitive former partners were also racing each other. Globus had the upper hand, with a completed script (a goofy mixture of Dirty Dancing and Stand and Deliver) in place and pre-production in progress; Golan hired Roy Langsdon and John Platt to write his film’s script, primarily because they promised they could write it in ten days. They delivered a hilariously hokey confection that tethered the dance’s rise to an Amazonian princess’s mission to save the rainforests, which Golan somehow managed to get in the can first, by mid-February. (His director was Greydon Clark, whose resumé included Satan’s Cheerleaders, Joysticks, and the MST3K fave Angels Revenge.)

There was a fight over titles; Globus and Cannon called their film Lambada: The Movie, while Golan and 21st Century wanted the title Lambada! The Forbidden Dance. But Globus registered his title first, so Golan had to settle for The Forbidden Dance (ever the savvy marketer, he added “…is Lambada!” to the title as a tagline on its marketing materials, making sure “Lambada” was at least as large as the title proper). Golan, not to be outdone, had secured the exclusive rights to “Lambada” by Kaoma, the hit song the dance craze had attached itself to.

According to Mark Hartley’s wildly entertaining Cannon documentary Electric Boogaloo, the competing filmmakers worked overtime; they rushed through photography, attempted to shoot in order (so the film could be edited and locked behind them), and generally exhausted themselves in an attempt to win the race. According to Premiere magazine, Lambada wrapped on March 5, 1990, just eleven days before its release date (the New York Daily News reported that the MPAA had not even had the opportunity to rate it). But despite all of their efforts, the films both landed in theaters on March 16, and effectively cannibalized each other’s audiences; Lambada came in eighth for the weekend, and The Forbidden Dance didn’t even crack the top ten. That put the kibosh on Golan’s plan for a sequel (Variety had reported in February that Naked Lambada! The Forbidden Dance Continues was scheduled “for a June start in Brazil”), as well as four more Lambada-based movies, including, per the Daily News, “Lambadamy (a comedy), Blame It on Lambada (a murder mystery), and Lambada: The Sound of Love.”

The two Lambada movies we got are sort of fascinating, but mostly as car wrecks (and for their casting of ingénues of note: The Office’s future Jan Levinson, Melora Hardin, in Lambada, and Mulholland Drive’s Laura Herring in Forbidden Dance). The real story and drama was far off-screen, as these two family members, former partners, and schlock movie kingpins, no longer on speaking terms, worked out their aggression via competing exploitation movies. Their simultaneous failure certainly didn’t defrost the relationship; when Variety asked Golan about his cousin in April 1992, he replied, “What cousin? I have no cousin.” But less than a month later, Variety reported that the former partners were chatting it up at their old stomping grounds of the Cannes Film Festival. “I never really fell out with him,” Globus told the trade paper. “We are cousins, we are family… I wish Mr. Golan all the best from my heart.” It was something neither man could refuse: a publicity-friendly happy ending.

“The Forbidden Dance” is available on a variety of streaming services. “Lambada” has basically been memory-holed.