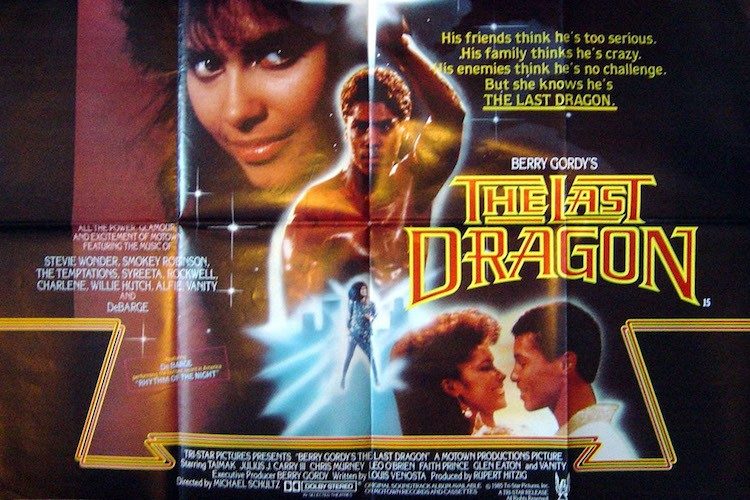 Nothing sells me on a movie faster than a title song that just reiterates the plot in a catchy way, and they don’t come much catchier than the title song of the only movie the founder of Motown Records ever produced.

Berry Gordy’s The Last Dragon (1985) opens like the attract mode of an arcade fighting game — slow-motion close-ups of muscles carved in shadow, flying kicks that treat gravity as polite suggestion, an irresistible beat and lyrics built of raw motivation — a fast, flashy case for dropping in a quarter and seeing what else this thing has in store. As an arcade game, The Last Dragon would bankrupt entire grade schools. As a 107-minute motion picture that comes with a generous helping of Bruce Lee footage re-scored by Motown’s hottest up-and-comers, it must be seen to be believed. That may be a cliché, but I don’t call it into service lightly.

I was trawling a video store, looking for a movie that couldn’t have been half as memorable as Dragon considering I can’t remember it, when the friend who’d joined me on this hunt found one of his minor grails. He’s always had a more refined palate for kung-fu than I, but this was not another Shaw Brothers deep cut. He told me this one featured a full, uninterrupted music video for DeBarge’s “Rhythm Of The Night” smack in the middle of it. And you don’t just forget a recommendation like that.

After finally buying my own copy to see for myself, I found this was not entirely true and buried the lede: Only the first few minutes of the music video get screentime, but that’s also one of the least delirious things about The Last Dragon.

Our hero, Bruce Leroy, known as much for his martial artistry as his tendency to dress exclusively in Bruce Lee costumes, reaches the final stage of his training and becomes The Last Dragon, but still must learn how to channel the mystical, rotoscoped power that comes with the title – “The Glow.” So important, this glow, that it’s not only repeated in the refrain of Dwight David’s title song, but earns its own dedicated single from Motown legend Willie Hutch, aptly named “The Glow.”

But Leroy’s not the only challenger for the title – Sho’nuff, The Shogun of Harlem, is ready to kill for it. He wears shoulder pads shirtless. He puts on Japanese flag shutter glasses like punctuation for a death sentence. He keeps an entourage of tough customers around just to make the proper entrance, asking them if he’s the meanest, prettiest, and baddest around so they answer, “Sho’nuff!” And to his credit, even if physical attraction is a more subjective scale than meanness or badness, they’re not wrong.

To offset his instantly iconic cool, Last Dragon takes a cue from blaxploitation and provides an equal-and-opposite pudgy white guy in a suit to pull the strings and sweat a lot. Eddie Arkadian is the baron of video arcades, though it is not made clear if his last name is a coincidence or arcades are an old family birthright. What he wants more than anything is to make his girlfriend, a screaming Cyndi Lauper parody, a star. This is his only motivation. So you can imagine how mad he’d be at the video DJ played by singer-turned-actor Vanity, who absolutely refuses to play the girlfriend’s aggressively off-putting music videos. Naturally, Arkadian’s only recourse is to kidnap Vanity and make her watch said videos, for ghoulishly over-sexualized singles like “Dirty Books,” until she relents. But he hadn’t planned on her having a secret admirer in one Bruce Leroy.

I could keep outlining the ludicrous turns of plot in Last Dragon, but I wouldn’t do it justice because the movie’s ace-in-the-hole is how it presents them. One of the first scenes takes place in a run-down movie theater playing Enter the Dragon for a riotous audience. Every race, creed, and hair color are duly represented and equally amped up for some Bruce Lee action. Leroy is the only calm soul in attendance, sitting down front and eating popcorn with chopsticks. Then Sho’nuff enters, announces his presence with the standard question-and-answer session, and challenges Leroy to throw down in the middle of the theater. And nobody minds. When the inevitable fight does break out, random patrons decide they could take Sho’nuff and try, to their immediate regret. The Last Dragon establishes a matter-of-fact comic book reality not unlike the stranger extremes of Walter Hill’s filmography. The Warriors exists in a real-enough New York City where everyone seems to be in a gang, each almost mythic to the rest. Streets of Fire plays out in a 1950s-inflected 1980s where it’s always night and the only rule is rock ’n’ roll. Neither movie wastes any time explaining the kinks in their respective worlds — they just start going and let you pick up the pieces for yourself.

In the world of Berry Gordy’s The Last Dragon, nothing matters but music and martial arts. Everyone parties at Vanity’s club, 7th Heaven. Everyone knows one or two moves in the ancient art of kicking ass. And absolutely everyone respects Bruce Lee. No explanation necessary. In that way, Dragon is an open-hearted tribute to the black appreciation of martial arts movies that kept fists flying in the grindhouses long after the kung-fu craze died down. It was a similar scene in a similar theater also showing Enter the Dragon that gave writer Louis Venosta the idea to begin with. It also accounts for one of Last Dragon’s oddest touches: Leroy and Sho’nuff are near-stereotypes of Chinese heroes and Japanese villains, respectively, while almost every Asian character is a near-stereotype of black people in movies that use them as shorthand for “street.” Without ever calling attention to it, this little tweak serves as an unexpected reminder that the Asian martial arts movies that inspired The Last Dragon showed a lot more respect to people that didn’t look like Chuck Norris than most American equivalents at the time, while also occasionally showing people who didn’t look like Chuck Norris kick Chuck Norris’s ass.

In a diversion from kung-fu and blaxploitation standards, there’s little revenge in the proceedings, and even less anger. Sho’nuff shouts literally everything he says. Arkadian demands vengeance from Leroy mostly for being cooler than him. But Leroy himself is so naïve he’s almost flawless by default, helped in no small part by a convincingly innocent performance from first-time actor Taimak Guarriello. Writer Venosta admitted his intention: “There really should be a young black kid superhero-type figure who kids can look up to.”

Berry Gordy’s The Last Dragon is an infectiously funky kung-fu fairy tale. There may be one too many Motown promos shrewdly snuck in, but the staggering contrast between Vanity’s dancing — like a bored sorceress enchanting without even trying — and Not-Cyndi Lauper’s — like a dying robot trying to simulate sex — is almost worth it. Considering two songs from the soundtrack were nominated for Razzies (which are more like the high school lackey who piled on any kid already taking a beating than a legitimate awards presentation), the soundtrack probably seems less overt than it did at the time. The Last Dragon rode on a disastrous wave of kung-fu tributes that crashed about as fast as it came in, with The Golden Child and Big Trouble in Little China breezing through theaters the following year.

But there’s a reason Busta Rhymes borrowed Sho’nuff’s name, style, and mantra in the video for “Dangerous.” You can’t keep a cult movie down, and unlike most, Berry Gordy’s The Last Dragon cashes its checks. Killer soundtrack. Impressive martial artistry. Too many quotable lines to catch in one viewing. A killer fish creature that only shows up for two scenes. Punches that produce red lightning.

With or without Gordy’s historic involvement, The Last Dragon is a cartoonishly good time that deserves to rile up rowdy audiences in the same theaters that served as international churches of kung-fu, where the faithful gathered to quote, cheer and mimic their one true god — Bruce Lee.

Jeremy Herbert kicks nothing in Cleveland.