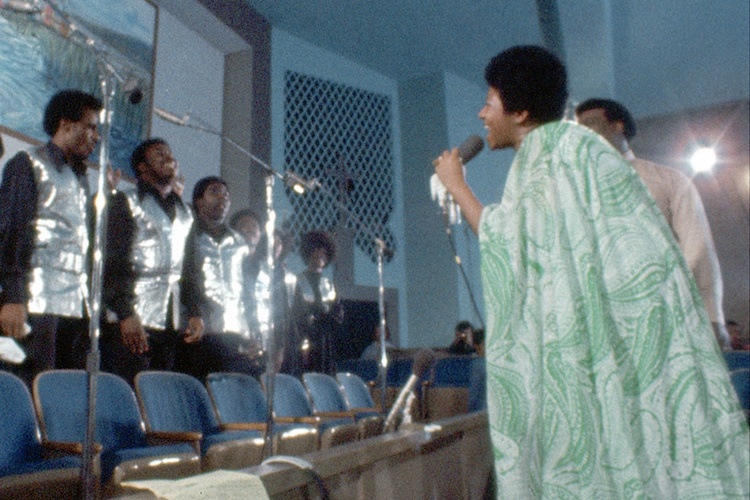 Amazing Grace, Aretha Franklin’s 1972 double-album of gospel songs, was the top-selling record of her career and the bestselling live gospel album of all time. (There might have been more live gospel albums than you realize.) It was recorded over two nights at a Baptist church in L.A.’s Watts neighborhood, filmed by director Sydney Pollack and five cameramen so that Warner Bros. could release a movie version as a companion to the album. But there were technical problems for a few decades, followed by legal problems, and so the Amazing Grace documentary is only now being released, 47 years later, over Aretha Franklin’s dead body. (I recommend this Rolling Stone article for a succinct and fascinating overview of the movie’s history.)

If it seems disR-E-S-P-E-C-Tful to watch a movie that Aretha didn’t want you to see, take solace in knowing that 1) it wasn’t because she thought the movie was bad and 2) it’s so great and beautiful that her objections should have been overruled anyway, just for the common good. Her voice, not yet 30 years old, is as earth-shakingly powerful as it would ever be, delivering the catalog of familiar gospel songs (plus Carole King’s “You’ve Got a Friend”) with more passion, volume, and technical precision than most of them would ever get from any other singer. She doesn’t engage in between-songs banter with the audience, doesn’t say much of anything when she’s not singing. She’s backed by a powerhouse choir and small band, with the Rev. James Cleveland banging away on the piano and serving as emcee. Everyone is at the top of their game.

Contrasting the polished sound of the event (which millions have already heard) is its scrappy, unpolished look. The purpose of the two nights was to record an album, after all — filming it was a secondary concern. So this is a behind-the-scenes documentary as much as it is a concert film, and you can see the cameramen scrambling around, wires and cables everywhere, even Pollack himself sometimes, emphatically gesturing instructions to his crew. The New Temple Missionary Baptist Church, with its ancient choir seats and uncomfortable-looking pews (familiar across all religious denominations), doesn’t look any different from a normal Sunday service except that Mick Jagger and Charlie Watts are standing in the back. It’s January, but a lack of air conditioning has everyone sweating profusely, especially Aretha. All of this rawness makes the show feel more intimate, the reactions from the congregation more like our own. A meticulously “cinematic” concert film wouldn’t have been nearly as effective at capturing the Queen of Soul’s majesty.