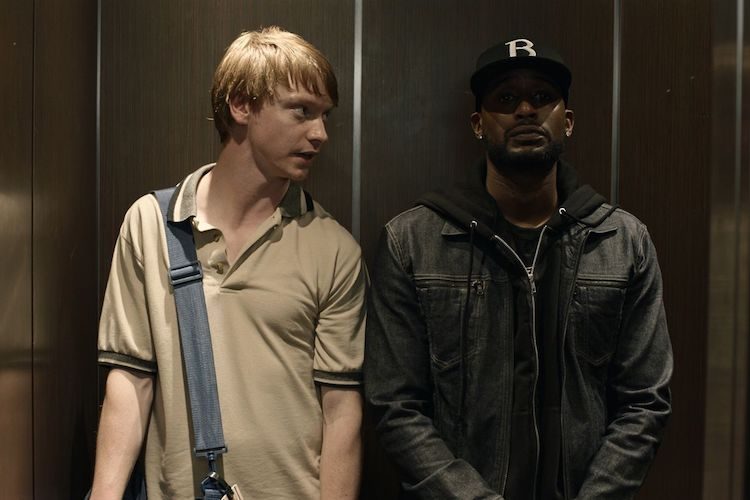 My understanding of battle rap — informed entirely by Joseph Kahn’s Bodied, a devastatingly funny social commentary — is that it’s like a no-holds-barred comedy roast except the jokes have to rhyme, with participants insulting each other in loosely metered couplets that may be either improvised or prepared. As in a roast, every aspect of the target’s private and public life is fair game, and getting offended is considered unprofessional. I feel like being a battle rapper MIGHT be my calling in life.

Bodied (slang for killed or defeated) examines this subsection of hip-hop culture through the eyes of a white Berkeley graduate student, Adam (Calum Worthy), who’s writing his thesis on it and ends up becoming a participant after interviewing battle-rap champion Behn Grymm (Jackie Long) — much to the dismay of his own shrill, scolding girlfriend, Maya (Rory Uphold), who’s offended by the content of the un-P.C. raps and by the very idea of a white suburban kid being involved.

Kahn structures the story like a sports movie, culminating in an electrifying showdown between mentor and protege that is at least as exciting as any actual sports movie I’ve watched. But even better, he uses the scenario to crack open and satirize an impressive number of hot-button topics — racism, misogyny, homophobia, cultural appropriation, who can say the N-word, fake outrage from outsiders, the liberal game of calling out other liberals for not being woke enough — AND to discuss the mechanics of brainstorming and joke-writing.

The screenplay, attributed to actual battle-rapper Alex Larsen with Larsen and Kahn sharing “story by” credit, has people not having conversations so much as taking turns making overwritten pronouncements, a style that requires some adjustment but fits the broadly satiric tone and intentionally stereotypical characters. Despite a few comedic misfires (inevitable in a film this densely packed), it’s an explosively funny snapshot of American culture in 2018.

2 hrs.; rated R for strong language and sexual content throughout, some drug use and brief nudity