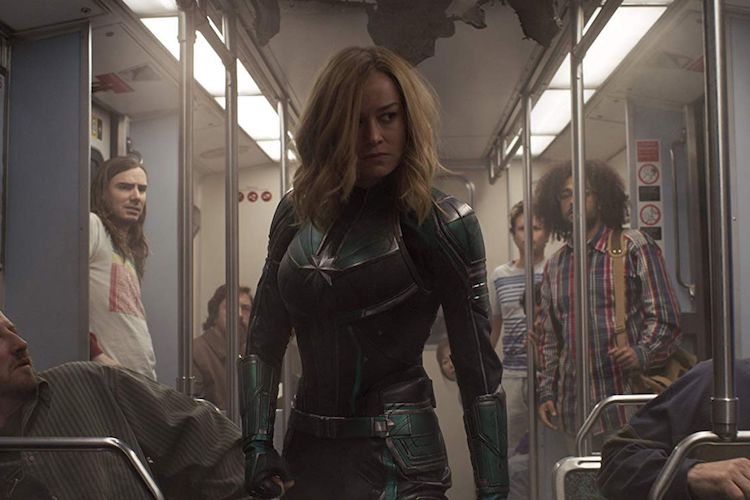 Many of the people seeing Captain Marvel (myself included) won’t know anything about the character going in except that she’s from Marvel Comics and that you’d think she’d be a bigger deal given that she’s named after the company. After seeing the movie, a middling, good-enough episode in the Marvel Cinematic Universe series, I still don’t know much about her except that she derives her massive power from one of the MCU’s many enchanted trinkets — the Tesseract, whose powers are also not clear to me — and that she will likely be the key to defeating Thanos in next month’s Avengers: Endgame (which will finish the story that Avengers: Infinity War half-told last year).

Directed by the Half Nelson team of Anna Boden and Ryan Fleck from a screenplay credited to them and Geneva Robertson-Dworet (Tomb Raider), Captain Marvel does highlight the filmmakers’ resourcefulness. Faced with having to concoct an origin story that will mesh seamlessly with the moving parts already flying around the MCU, they turned the formula on its head. We start on the planet Hala, populated by warrior-heroes of the Kree race, where a soldier named Vers (Brie Larson) is being trained by exacting sensei Yon-Rogg (Jude Law) on the art of killing Skrulls, the Kree’s shapeshifting enemies. When Vers is captured in battle, the Skrulls dig around in her memory for a detail they need — thus giving us a brief overview of Vers’ life without having to spend the first half of the film on it.

This narrative choice also ramps up the mystery factor. Vers’ memories seem to take place on planet Earth, which is strange for an alien from the planet Hala. In her memories, she was a pilot, and her mentor was the brilliant Dr. Lawson (Annette Bening), whom Vers now sees whenever she visits her planet’s A.I. leader, which takes the form of the viewer’s most trusted and revered person (mine, as you know, is Carrot Top). The Skrulls, led by a rather nice-seeming fellow named Talos (Ben Mendolsohn), are after a light-speed engine that Dr. Lawson was supposedly working on, which the Kree fear would allow the Skrulls to terrorize even more galaxies than are currently on their route. And over all of this hangs the question of Vers’ true origins.

Most of the action takes place on Earth in 1995, where Vers comes in pursuit of the Skrulls. She teams up with S.H.I.E.L.D.’s Nick Fury (Samuel L. Jackson), who still has both eyes in 1995, and there are brief interactions with our beloved Agent Coulson (Clark Gregg), who is still alive in 1995 (and I guess is alive again now, but only on the Marvel TV shows, which doesn’t count, sorry). The Blockbuster video stores and dial-up internets and grungy music of the mid-90s are also on display, mostly for humorous purposes.

The dynamic between Larson and Jackson as Vers and Fury is lively and fun. He’s an upbeat butt-kicker who has just learned that aliens exist; she’s a no-nonsense butt-kicker who might be an alien and has no patience for Earth men who tell her to smile more. When she ditches her space costume (“dressed for laser tag,” someone says) for a less conspicuous outfit, it includes a Nine Inch Nails T-shirt and makes her look, as Fury puts it, “like someone’s disaffected niece.” Which is perfect.

The Skrulls’ ability to turn from ugly reptilians into any other person just by looking at them results in amusing situations like Vers fighting with an “old woman” on a train in front of stunned passengers. Vers and the other good guys are constantly on guard with each other, asking deeply personal questions to make sure no one’s been replaced by a Skrull impostor. We also learn details about the Skrulls and their past that suggests the issue is more complicated than Us vs. Them, with talk of “refugees” and someone calling Earth a “s***hole” that will call certain current events to mind.

But the shifting alliances and carefully parceled-out information, while keeping things interesting, also create a problem that several Marvel films have had: There are obstacles but no real villain. Vers’ challenges are largely internal. This pays off in a stirring moment where she recalls all the times she’s gotten up after being knocked down, underscoring perhaps the most admirable thing about humans (female humans in particular) … but it’s not the adrenaline-fueled climax we’ve been conditioned to expect.

The whole thing feels like Marvel paused the main story (the Avengers and their friends) to quickly tell the backstory of a new character who’s about to show up and be important, like a flashback in a Tarantino movie. It’s necessary — think how annoyed we’d be if Avengers: Endgame hinged on someone we’d never seen before — but it does the character a disservice. She’s named after the franchise, for crying out loud! Can’t we come up with something more exciting and fully formed?