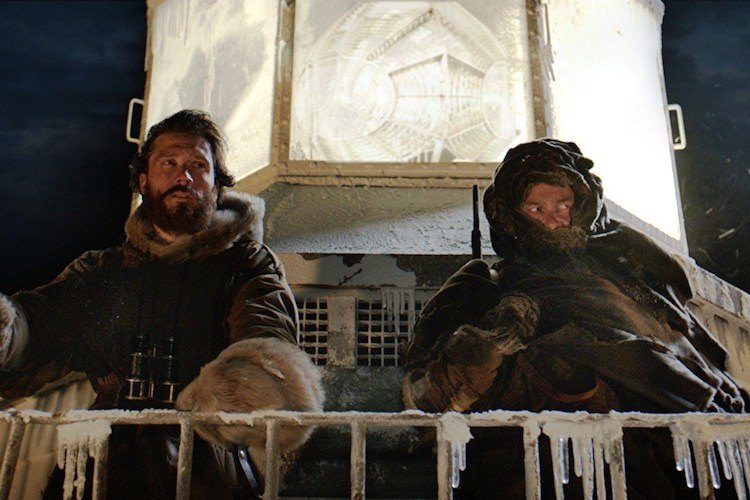 Cold Skin starts with the Nietzsche quote about how monster-hunters must beware lest they become monsters themselves, staring into the abyss may result in the abyss staring back at you, yada yada. It’s pretty on-the-nose for the story that ensues, which is based on a novel by Albert Sánchez Piñol and directed by Xavier Gens (Hitman), but this chilly, restrained horror drama has a few surprises amid its familiar tropes.

It’s 1914 and war has just broken out, but that’s of little import to the residents of the small, barren island in the south Atlantic where the entire movie is set. There are exactly two residents: Friend (David Oakes), a disillusioned young man who has just arrived for a 12-month stint recording weather patterns for the British government; and Gruner (Ray Stevenson), a woolly misanthrope who runs the lighthouse a few hundred yards away from Friend’s cabin.

Actually, as Friend discovers his first night on the island, it may not be accurate to say that he and Gruner are the only inhabitants. There’s also a race of amphibious humanoid monsters who only come out at night, who besiege the cabin almost immediately, seemingly bent on eviscerating any flesh-based organism they encounter. (What happened to the last meteorologist stationed here, anyway…?) Gruner has obviously learned how to coexist with these things, insofar as he has not been eaten by them, but he’s not interested in sharing that knowledge with Friend until it becomes imperative. (Gruner is the type of person who should probably live in isolation from other humans.)

While Friend and Gruner spend most nights defending themselves from the monsters (which they call “frogs” but which more closely resemble the fish-man in The Shape of Water), during the day they get another view of the species thanks to the specimen Gruner has domesticated (played by Aura Garrido) who lives in the lighthouse with him like a pet. He never bothered to give her a name, but Friend — alarmed by the danger the creatures pose but cognizant of their intelligence — calls her Aneris and tries to balance his fear with compassion. Gruner points out that, after all, the “frogs” were here first — but Gruner’s stated intention is also to exterminate them, and he’s the one who treats Aneris like an animal. So don’t go by him.

With Aneris being a female member of the species and eerily beautiful in her way, living in isolation with two men, you wonder: Does the movie go there? It does, though perhaps not the way you’d expect. And truth be told, it would be a better film if it had gone further. As it is, it’s almost too reserved, too literary, playing footsie with the many horror/sex/madness possibilities of the scenario without fully exploiting them. But it’s an interesting, almost high-brow take on B-movie material, beautifully photographed, that isn’t too pretentious when it asks the perennial question “Who are the real monsters?”