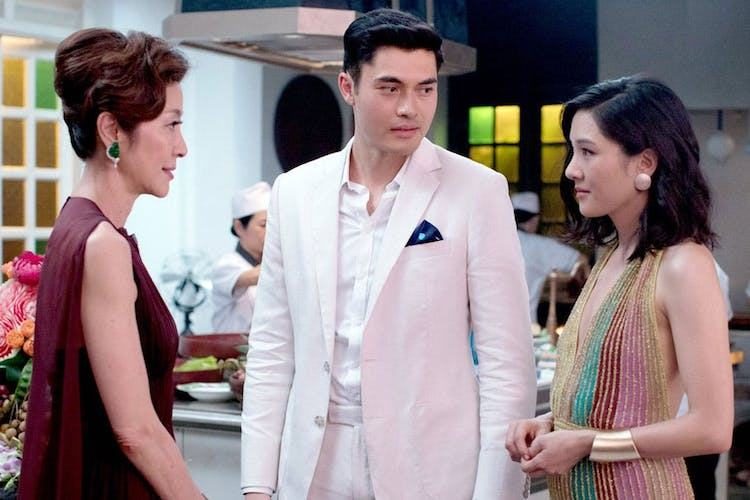 There are two things about Crazy Rich Asians that separate it from most romantic comedies. One is that it’s good. Based on Kevin Kwan’s bestselling novel and directed by John M. Chu (Step Up 2: The Streets, Now You See Me 2), it uses one of the standard formulas, but the plot isn’t based on dumb lies or moronic misunderstandings quite as much as most rom-coms’ plots are, and the characters generally aren’t self-absorbed simpletons. This counts for a lot.

The other noteworthy thing is that except for a few minor characters, everybody in the movie is Asian. Mixed in with the usual tropes of disapproving mothers, kooky relatives, jealous ex-girlfriends, catty gay sidekicks, montages of trying on dresses, frantic trips to the airport, public reconciliations, etc., are elements of Asian culture (Chinese, specifically) that give the familiar proceedings a mildly exotic twist if you’re a Westerner — to say nothing of how it must resonate for Asian audiences, who have seldom seen themselves or their culture in the framework of a Hollywood rom-com.

The story in this particular Hollywood rom-com is the one where a smart, independent New York career gal, Rachel Chu (Constance Wu), accompanies her handsome boyfriend, Nick Young (Henry Golding), to a friend’s wedding in Singapore, where she learns that Nick is heir to a global fortune and his family is one of the wealthiest in the region. Rachel comes from a working-class background, so Nick’s imperious mother, Eleanor (Michelle Yeoh), won’t approve of her. (At least Rachel’s parents were Chinese, thank goodness — her relationship with Nick would have been a nonstarter otherwise.) But Eleanor also knows what it’s like to have a demanding mother-in-law, as hers (Lisa Lu) is still reigning matriarch of the Young family and has no problem with Rachel.

The wedding they’re here for is that of Nick’s best friend Colin (Chris Pang) and one Araminta (Sonoya Mizuno), both fabulously wealthy like everyone else. The bride and her cohorts, including Nick’s scheming ex-girlfriend Amanda (Jing Lusi), play Mean Girls to Rachel during the pre-wedding events, but Rachel has people on her side, too. Her college friend, raucous party animal Peik Lin (Awkwafina), lives here with her only slightly wealthy parents (Ken Jeong and Koh Chieng Mun) and helps Rachel navigate the locals.

An assortment of other relatives and friends are introduced and trotted out for minor shenanigans, then abandoned when the story no longer has anything for them to do. Somewhat more attention is paid to Nick’s cousin, Astrid (Gemma Chan), and her husband Michael (Pierre Png), who are having problems, but you still get the feeling there was a lot more to this subplot in the book (which is part of a trilogy, by the way, and the film ends with hints about where it goes next).

Director Chu dives headlong into the sumptuous settings, basking in the characters’ lavish homes and clothes (and food!), having fun with all of it. The movie is basically one high-class soiree after another, and while some of these 1-percenters are tacky (Peik Lin says somebody’s taste for gold was inspired by Trump’s bathroom), they aren’t stereotypical selfish rich jerks. The opulence feels celebratory and well earned, not like a Great Gatsby delusion.

Storywise, it’s all familiar territory, but the lead performances are charming, and the central characters are intelligent, complex people you enjoy spending time with. The dialogue is witty, if only occasionally laugh-out-loud funny. Cultural touchstones like mahjong and the hand-making of dumplings are introduced without much explanation because it’s assumed the target audience already understands them. The rest of us may not know exactly what’s happening in the climactic mahjong scene, for example, but we get the gist — and hey, mahjong instead of chess for the game-as-metaphor, what a refreshing twist. It’s the small things, you know?

2 hrs.; rated PG-13 for some suggestive content and language