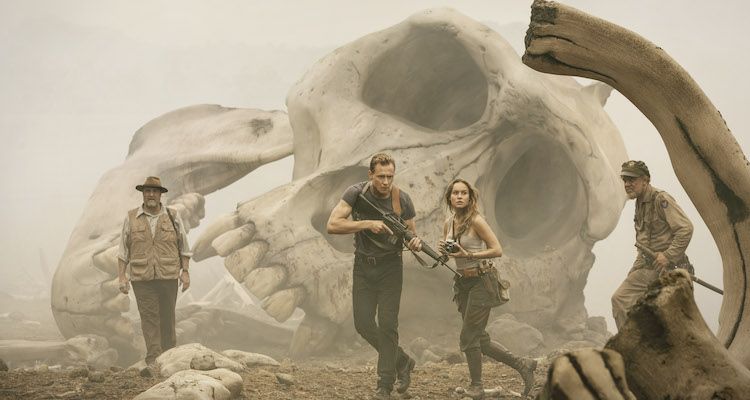 Kong: Skull Island is about people barging into a place they’ve never been before, dropping bombs to see how solid the land is, then acting indignant when the local wildlife responds defensively. It’s about humans punishing nature for being nature, and about bureaucrats embarking on research expeditions motivated by revenge.

Fine, fine. It’s also about giant animals, notably an ape of unusual size. A quasi-reboot of King Kong (minus the New York parts), Skull Island is a fleet-footed adventure movie with breathless action sequences punctuated by horror. Directed by Jordan Vogt-Roberts (The Kings of Summer) from a much-rewritten screenplay credited to three other guys, its creaky dialogue and questionable story are counteracted by visceral, thrilling scenes of zoological mayhem. There is a certain kind of moviegoer who wants to see huge monsters squash humans and fight each other, and Kong: Skull Island is happy to indulge them, not even bothering to play coy about revealing the beasts. We get a good, clear look at Kong before the movie’s two minutes old.

After a brief 1944 prologue, the year is 1973, as attested by the generic early-’70s rock soundtrack (“Ziggy Stardust,” “White Rabbit,” a few Credence Clearwater Revival tunes, Black Sabbath’s “Paranoid” — all the usual suspects). New satellite images have revealed a previously unexplored island in the South Pacific, just waiting to be mapped, surveyed, and exploited (that part isn’t said aloud) by whoever gets to it first, which the men in Washington D.C. hope will be America. The geological team sent by the Feds is joined by Bill Randa (John Goodman), a government scientist with crackpot theories about What’s Out There, theories whose pots will shortly seem un-cracked indeed.

To help with the expedition, Randa recruits a tracker, Conrad (Tom Hiddleston), the best in the business, etc., the kind of cocksure adventurer who can only be found in seedy bars in the Orient. The group also needs a military escort and expert pilots to get through the daunting weather system that surrounds the island, so they swing by Vietnam to pick up Lt. Col. Preston Packard (Samuel L. Jackson) and his squadron of jocular helicopter bros, who sass one another in the manner of war movies before most of them are gruesomely (spoiler alert) killed. Finally, there’s Mason Weaver (Brie Larson), a respected photojournalist who’s tagging along because she suspects this is more than an ordinary surveying mission, and because what’s a Kong story without a blonde?

Everyone gee-whizzes as the choppers carry them over lush green forests and primeval lagoons, dropping “harmless” seismic bombs to get geological readings. And then the nightmare begins! Kong, strikingly posed against a hellish orange sunset, arrives and, in a marvelously scary sequence, starts batting choppers out of the sky. (Part of this is filmed from a fixed point of view inside one of the helicopters, our vision of what’s going on limited to what the pilots can see — which, for several seconds, is nothing but a few giant brown fingers.) This act of self-defense by Kong is all the excuse needed by everyone in the party — the military, the scientists, the photographer, the tracker, and the bureaucrats — to declare war on him. Later in the film, a few people raise the issue of “hey, he was defending himself, we’re the intruders here, maybe we should chill out.” But at this key moment early on, not a word is spoken in support of simply staying out of the animals’ way.

And you think: Well, all right. You get what you deserve, then.

Packard, a warmonger frustrated by the non-victory in Vietnam, takes Kong’s hostility as a personal affront and vows to avenge his fallen fellow-soldiers — finally, a war he can win. Most of the other survivors of the initial skirmish, separated into smaller groups in the chaos, are focused on reaching the rendezvous point where a ship is scheduled to pick them up. One group, the contingent with Conrad the tracker and Weaver the photographer, runs into a native tribe that semi-peacefully co-exists with Kong and has a guest of its own: Hank Marlow (John C. Reilly), a WWII pilot who was shot down in 1944 and has been on the island ever since, getting more squirrelly with each passing year. Reilly and his antic silliness are a welcome boost of comic relief, not to mention the character’s utility as an explainer of Kong lore.

Now, the nice thing about the characters splitting up is that it means more opportunities to encounter the island’s super-sized fauna, which include massive spiders, insects, water buffalo, and assorted monstrous reptiles. And the nice thing about having too many characters in the first place (there must be 25-30 in the original landing party) is that the movie can afford to kill a lot of them. The movie does this with gusto, skirting the edges of the PG-13 rating by not showing much blood even as people are impaled, torn asunder, devoured, or otherwise exterminated. I wasn’t surprised to find that the screenwriters’ past work includes Jurassic World and Godzilla (2014), both of which came to mind more than once. (Is there a post-credits scene teasing a sequel? Do giant apes poop in the woods??)

Vogt-Roberts and his technicians have used immersive special effects and old-fashioned things like “good editing” to create exhilarating confrontations with truly fearsome animals, but they go soft on the element that ought to be at the heart of a King Kong story: an emotional connection to Kong himself. With more humanity and compassion and a sturdier plot, this could have been a great blockbuster instead of merely a fun one.

REVIEW: Ocean’s Eight Is More Efficient, Not Quite As Much Fun

REVIEW: Uncle Drew Has NBA Stars Clowning Around, Nothing Else

REVIEW: Boiled Angels: The Trial of Mike Diana Guilty of Being an Entertaining Doc (Fantasia Festival)

Mission: Accountable — The Facts & Figures of Ethan Hunt and the IMF