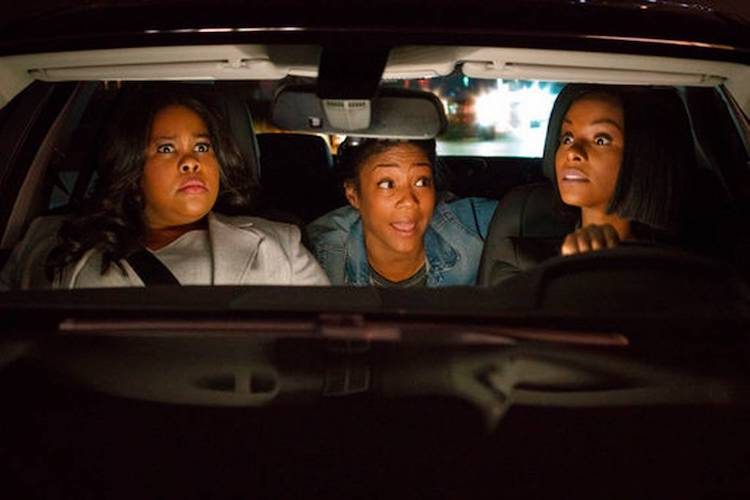 Though written and directed by Tyler Perry, Nobody’s Fool starts out bearing little resemblance to a Tyler Perry film. For one thing, it’s just called Nobody’s Fool, not Tyler Perry’s Nobody’s Fool. And instead of a clumsy melodrama, it’s a clumsy raunchy comedy about a sophisticated New York ad agent, Danica (Tika Sumpter), having to take in her trashy, mouthy, sexually voracious sister, Tanya (Tiffany Haddish), newly released from prison. Their odd-couple dynamic is further complicated when Tanya comes to believe that Danica, long-distance dating a man she’s never met in person, is being catfished.

Why, that all sounds like the setup for a normal R-rated comedy! But signs of Tyler Perryism start to creep in. Right in front of Danica is Frank (Omari Hardwick), the sensitive hunk who runs her favorite coffee shop, gives her free coffee and a rose every morning, and is clearly in love with her. Danica’s set on this “Charlie” fellow, though (if he exists) — and besides, Frank has been to jail, which goes against Danica’s list of requirements for her perfect man (which is an actual printed list).

The plot is full of inane contrivances. Frank immediately gives Tanya a job at his coffee shop. She’s required by her parole to attend Alcoholics Anonymous meetings — and guess what, Frank’s cafe is where they are held! (It’s like Perry wanted to save money on sets by having everything take place in one spot.) Despite being New Yorkers, everyone owns a car and drives everywhere, because Perry forgot that he was finally making a movie not set in Atlanta (or, alternatively, does not know that New York is different from Atlanta). The catfishing thread is resolved with help from the actual guys from MTV’s Catfish show (Nev Schulman and Max Joseph), in a bizarre sequence that involves Chris Rock in a Jheri curl wig and a wheelchair. Whoopi Goldberg plays Tanya and Danica’s pot-growing and -smoking mother, but her only function in the story is to help the girls get along so that Tanya won’t come live with her.

But Haddish, who has already been in three movies this year and was tamped down or underused in all of them, is finally permitted to cut loose and be the vulgar sexpot she was in Girls Trip. She’s very much in her element, making the most of the weak dialogue that has her throwing herself shamelessly — indeed, proudly — at every man she meets. Unfortunately, Tanya is not the lead character (despite Haddish’s top billing) and doesn’t actually have much to do. The focus is Danica, who turns out to be the type of wishy-washy, clueless woman Perry excels at mis-writing.

At around the hour mark, the story reaches the point where it should be wrapping up. The catfishing thing was settled, and Danica is starting to come around on Frank (who continues to be perfect). That’s when the Tyler Perry we know shows up to turn the remaining 50 minutes (UGH) into an exasperating soap opera for dum-dums. The sisters have a petty falling out; Danica dithers tediously about Frank; the catfishing thing comes back AGAIN, only to be settled again, accomplishing nothing other than padding out the runtime another five minutes. There’s potential for discussion about how Danica succeeds in white society by stifling her blackness, referenced subtly (and then overtly) by Tanya being the only one to call her “Da-NEE-ca” while everyone else says “DAN-ica.” But like so many Perry ideas, that one is casually introduced and then forgotten.

It eventually dissolves into the usual Perry morass, where nobody onscreen is behaving like a real person and you spend the last half-hour tapping your foot impatiently while making the “move it along” motion with your hand. Or maybe that’s just me. At any rate, Nobody’s Fool is another demonstration of what often happens when a single person writes, directs, and produces a movie without input from anyone else: You get a rough draft. The theaters charge full price, though.

1 hr., 50 min.; rated R for sexual content and language throughout, and for drug material