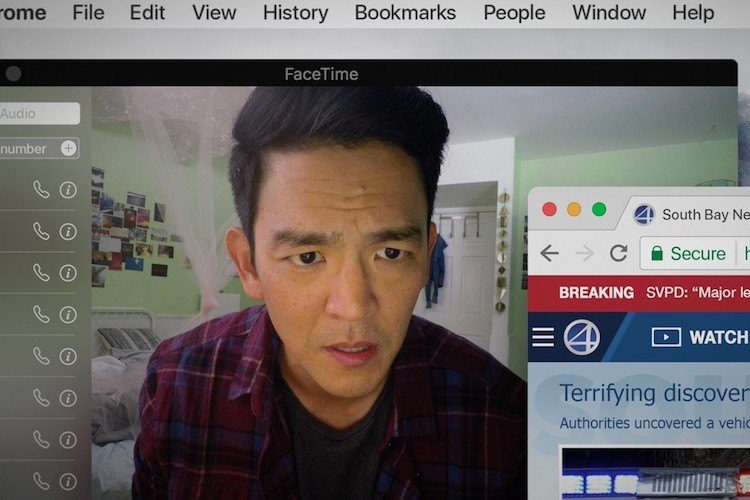 When teenage Margot (Michelle La) goes missing, her widowed father, David (John Cho), with whom she has always enjoyed a close relationship, realizes he doesn’t actually know any of her friends and has no idea where to start looking. Thus Searching is about a parent’s nightmare, made worse (like most things) by the internet, which proves to be both the cause of and solution to David and Margot’s problems.

Directed by first-timer Aneesh Chaganty from a screenplay he wrote with Sev Ohanian, Searching was produced by Timur Bekmambetov, the crazy Russian who used to make whacked-out vampire movies but has recently taken to the “screen life” genre, wherein entire narratives play out on computer screens. In this case, it’s David on his own laptop and on Margot’s, looking through her past video blogs, FaceTiming with various people, searching emails and photos for clues, watching live news coverage. For it to work, you have to accept that everyone — even police detectives, even strangers — conducts most of their conversations over FaceTime, and that a teenage vlogger would keep live-casting after her dad came into the room, and a few other not-quite-plausible things.

You also have to accept Debra Messing’s bewilderingly bad performance as the sympathetic cop working the case. Whatever she’s doing, Chaganty should have stopped her.

But it works pretty well overall, Chaganty staying within the confines of the gimmick while still the usual grammar of film (close-ups, pans, dramatic music, etc.). He shoots two people having a FaceTime conversation the same way you’d shoot a traditional phone call, only instead of cutting back and forth between locations, he cuts from one window on the desktop screen to another window on the same desktop. The plot, with the customary red herrings, false leads, and last-minute surprises, all faintly ludicrous in a Law & Order: SVU kind of way, isn’t reliant on the format and would have worked just fine as a traditional narrative, but the “screen life” structure grants us moments we wouldn’t get otherwise, like an angry parent typing out a lengthy, scolding text message to a disobedient child before taking a breath and replacing it with something less emotional. It’s interesting to see the details of a thought process that’s usually internal, and John Cho’s sympathetic and fully committed performance as the worried father grounds the movie, giving it a beating heart instead of just a racing pulse.

Too bad about Debra Messing, though. Man alive.

1 hr., 42 min.; rated PG-13 for thematic content, some drug and sexual references, and for language