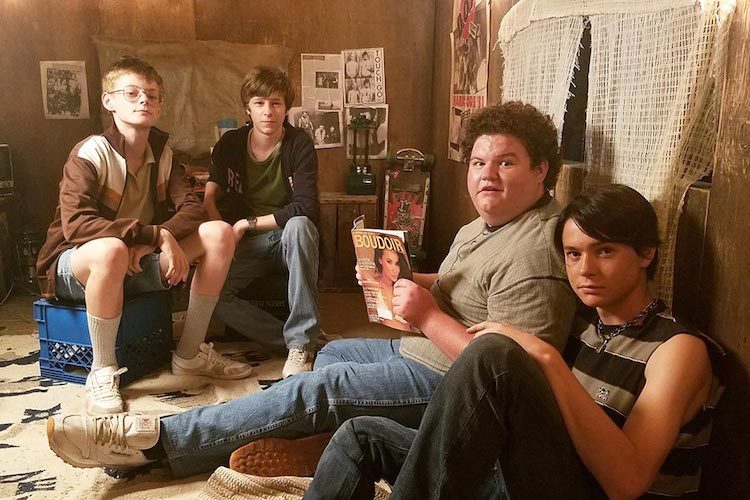 Summer of 84 is by the trio of Canadian directors — François Simard, Anouk Whissell, and Yoann-Karl Whissell, known collectively as RKSS (Roadkill Superstars) — who made Turbo Kid, a daffy, post-apocalyptic, ’80s-style “futuristic” adventure that premiered at Sundance 2015. Their new film is another play to nostalgia, but in the least imaginative way possible. (Crucially, RKSS didn’t write this one; first-timers named Matt Leslie and Stephen J. Smith did.)

You know the kind of movie where four boys on bicycles have an adventure in the summertime? It’s one of those. Think of every cliché you can come up with for the genre. Summer of 84 has them all, without subverting, twisting, or spoofing any of them. The four boys are a Normal (Graham Verchere), a Nerd (Cory Gruter-Andrew), a Fat (Caleb Emery), and a Horny (Judah Lewis). The Normal is a Spielberg fan who wants to be a filmmaker when he grows up. The four think their neighbor, a popular local cop named Mackey (Rich Sommer), might be a serial killer, so they undertake their own investigation.

There’s a pretty blonde (Tiera Skovbye) a few years older than our boys whom they lust after, but the Normal says, “Hey, cut it out, don’t talk about her like that,” because he alone knows she’s really special. And she turns out to actually have the hots for him! Shows up at his house when his parents are gone one night and puts the moves on him. I kept waiting for it to be a trick, or a dream sequence, but nope.

I kept waiting for a lot of things that never happened. Since the formula is so common, I figured they’d deviate from it at some point. Why make an homage to ’80s boys-on-bikes movies in 2018 if you’re just going to do a straight copy? But a straight copy is exactly what they made. It’s not funny, suspenseful, clever, or surprising. It doesn’t capture the look or feel of 1984 particularly well. The serial-killer angle has no teeth to it until the end, when the movie takes a cruel, tone-deaf turn and kills a character who had no reason to die. Summer of 84 takes the path of least resistance, plays it safe, checks off every trope on the list without examining a single one of them. It’s a terrible waste of time, talent, and energy.

(The cast is fine. Not their fault.)