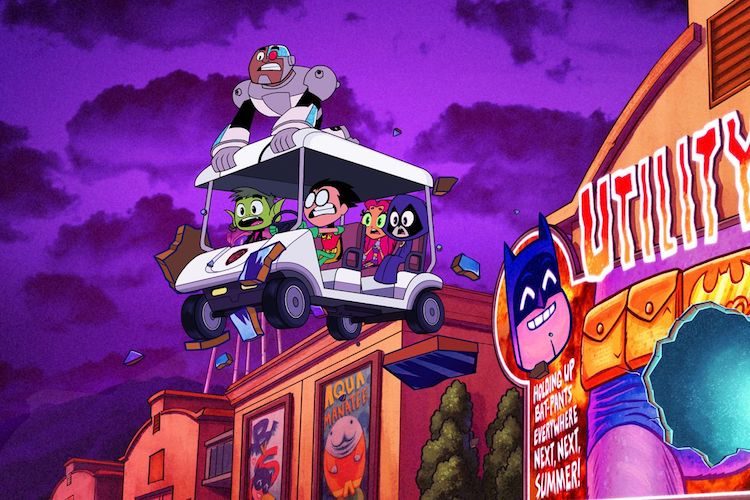 Teen Titans Go! To the Movies, the very meta big-screen adaptation of the Cartoon Network series Teen Titans Go!, is about a quintet of adolescent superheroes seeking to earn the same respect their adult counterparts get by doing what so many of them have done: starring in a movie. The idea occurs to the team leader, Robin (voiced by Scott Menville), when they’re at his pal Batman’s latest premiere (Batman Again) and discover that a standalone Robin movie is even further down Hollywood’s priority list than standalone movies about Alfred the butler or the Batmobile.

Have all the adult heroes gotten movies? Superman (Nicolas Cage) says yes, many, with more to come. Wonder Woman (Halsey) is happy to report that it took a while, but she finally got one too. Green Lantern (Lil Yachty): “There was a Green Lantern movie, but … we don’t talk about that.”

You get the idea. Written by show creators Michael Jelenic and Aaron Horvath, directed by Horvath and Peter Rida Michail, this is a superhero spoof where the satire is pitched at about the “Weird Al” Yankovic level: funny, but simple; not exactly scathing. Like the cartoons produced by the same Warner Bros. studio many decades ago, it’s aimed at kids but has a few jokes only grownups will get, and the plot is innately silly and inconsequential.

There are jokes about Stan Lee cameos and other things related to the business of superhero movies, and jokes about superhero tropes in general. One idea briefly explored by the Teen Titans for proving their value is to travel back in time and prevent all the other superheroes’ origins from happening, thus making the Teen Titans the only game in town. Accompanied by the score from Back to the Future, they go back and prevent the explosion of Krypton and the death of Bruce Wayne’s parents, among other things. When they return to the present, the hero-less Earth is a hellscape, so they go back and undo their undoing, letting Krypton explode after all, encouraging Mr. and Mrs. Wayne to go down that alley after the opera, etc.

Also: a giant monster made of balloons gets shot in the butt, and the escaping air sounds like a long fart.

Robin is a surly, selfish team leader, which makes his crew’s praise of him at the end a little disingenuous. His team members are a teenage Cyborg (Khary Payton) and three I wasn’t familiar with: Goth girl Raven (Tara Strong), shapeshifting Beast Boy (Greg Cipes), and alien Starfire (Hynden Walch). Many more famous superheroes have brief cameos (Nicolas Cage is the voice of Superman), but nothing to get excited about. Like I said, it’s meant for young viewers, not their geek parents. But the geek parents will get a kick out of it too.