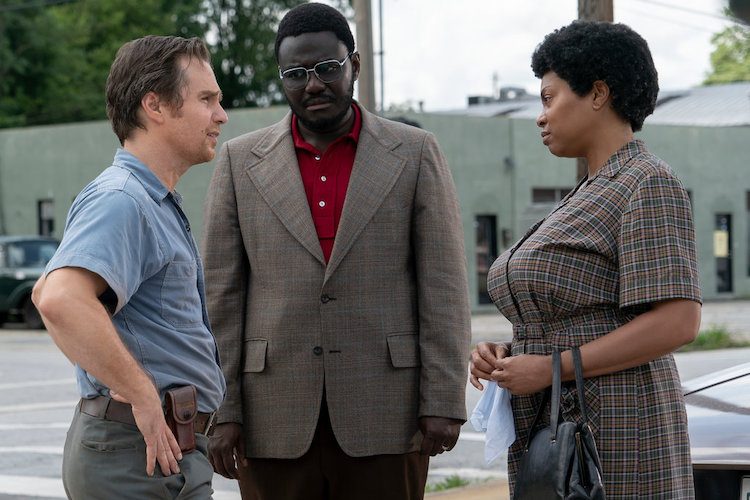 Hollywood continues to solve racism one bigot at a time with The Best of Enemies, a shiny, shallow trinket based on true events that, in the hands of first-time feel-good filmmaker Robin Bissell, seem made-up.

It’s 1971 in Durham, N.C., where the schools are still segregated and C.P. Ellis (Sam Rockwell), head of the local KKK franchise, has the ear of several members of the city council. A fire at the black elementary school (not arson!) would seem to force the integration issue — where can those kids go now but the white school? — but the racists are NOT having it.

Enter Ann Atwater (Taraji P. Henson in matronly padding), a tireless community organizer and exhausted single mom. She sees no reason to compromise on any of this but is persuaded to participate in a 10-day discussion called a charrette in which members of the community on both sides of the issue — black and racist — discuss the problem and seek solutions. She represents the black citizens; C.P. Ellis agrees to represent the whites. The moderator, a black man named Bill Riddick (Babou Ceesay), wants to appease the racists, a bad but very popular strategy throughout history.

As you might expect, Ann and C.P., who have been aware of each other for years but obviously have not traveled in the same circles, come to respect one another over the course of the charrette. (I should note that it’s C.P. who has to change his attitude, not Ann. She makes virtually no effort to stop being black when C.P. is around.) Ann finds ways to connect to C.P. and his family (including his wife, played by Anne Heche) without backing down from what’s right while C.P.’s overt, N-word-using hatred of black people gradually diminishes. Meanwhile, the racist machine that C.P. is part of works to thwart the charrette process. C.P.’s Klan lieutenant (Wes Bentley), a corrupt city councilman (Bruce McGill), and two non-racist whites (John Gallagher Jr. and Caitlin Mehner) figure into the story, giving it more nooks and crannies.

You know who doesn’t figure much into the story? Ann Atwater, whose story half of it is. As much as I like the sub-genre of Movies Where Taraji P. Henson Puts a Boot Up The Man’s Ass, it’s frustrating when she’s given only a few showcase scenes to do it. The Best of Enemies focuses mostly on the white guy, telling us little about Ann’s own life and reducing her to a shuffling, sagging stereotype of an indomitable black woman.

And then there’s the finale. It spoils nothing to say that C.P. has a change of heart; what else would the movie be about? The problem is: I don’t buy it. I’m not saying it didn’t happen. Everything may have transpired exactly as it’s depicted here. I’m saying that within the movie, the resolution feels like a contrived fantasy, not the actions of a real person. Rockwell does the best he can (which is a lot), but the screenplay isn’t up to the difficult task of showing someone changing.

They show footage of the real C.P. Ellis and Ann Atwater over the closing credits, I guess in case we didn’t believe they were real people. Hearing their voices made me think I’d rather see a documentary about the two of them. Turns out there is one: “An Unlikely Friendship,” which is under a half hour and aired on PBS. The Best of Enemies isn’t bad, just a mediocrity and a lost opportunity. If history is any guide it will win Best Picture.