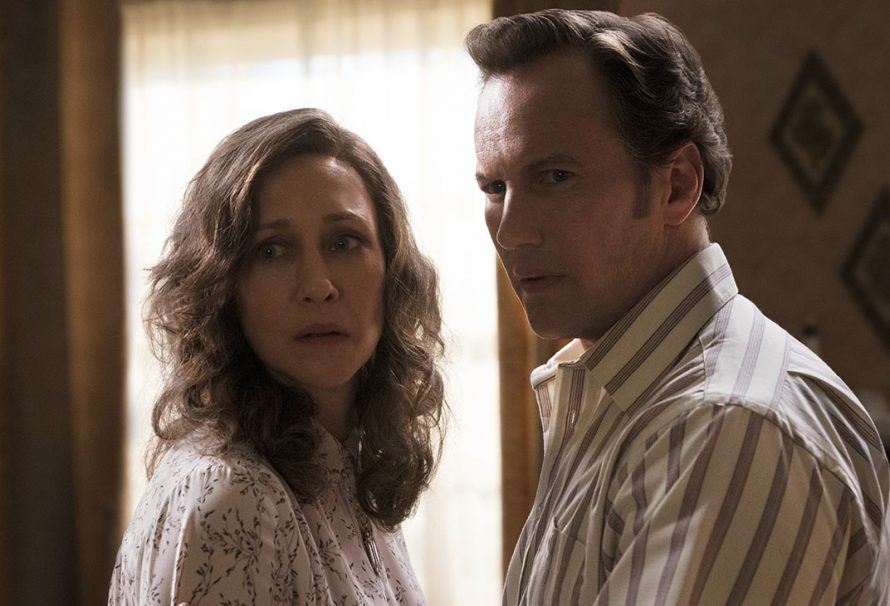 Out of all my mother’s wisdom, two ideas about evil from my childhood endure: MLMs are immoral scams, and demons are not to be trifled with. Though the R-rated The Conjuring: The Devil Made Me Do It would likely have been as forbidden from our Evangelical home as Amway products, my mom would’ve agreed with its basic premise of the presence of demonic forces. The third Conjuring film feels like a throwback to the Satanic Panic era I grew up in, not only in its 1980s setting, but also in its associations between earthly evil and hellish beings intent on murder and mayhem for no discernible reason. Audiences might not buy the film’s holy water-steeped philosophy or find its scares as strong as those in The Conjuring (2013) or The Conjuring 2 (2016), but they’ll still emerge with sufficient chills — and plenty of time spent with horror’s cutest couple.

The latest horror movie in the blockbuster Conjuring universe acts as penance for the series’ recent sins. The spinoff Annabelle Comes Home (2019) only featured a few scenes with the husband and wife who are the soul of the series: Ed and Lorraine Warren, played by Patrick Wilson and Vera Farmiga. Here Ed and Lorraine are the focus for the film’s entirety, as it spends its two-hour runtime on a single story, based on a real-life case.

In 1981, the Warrens participated in the exorcism of eight-year-old David Glatzel (the adorable, bespectacled Julian Hilliard of The Haunting of Hill House). While their efforts initially appear successful — other than giving Ed a literal heart attack — they soon realize that the demon that possessed the boy isn’t gone; it moved into the nearby body of David’s sister’s boyfriend, Arne Johnson (Ruairi O’Connor). Shortly after, the formerly sweet Arne commits murder, shocking both his devoted girlfriend, Debbie (Sarah Catherine Hook), and his entire small town. The Warrens are drawn back into the dark situation, as they help Arne to plead “not guilty by reason of demonic possession” in his trial for murder.

For a brief moment, The Conjuring: The Devil Made Me Do It looks as though it will morph into a true crime/horror hybrid, radically evolving its formula after so many previous films. However, writer David Leslie Johnson-McGoldrick and director Michael Chaves veer left, skimming over the legal proceedings and sticking with the devil they know. But they don’t quite do what’s expected either; Ed and Lorraine are somehow even more central — and even more in peril — than they’ve been in earlier adventures, as they become the specific targets of the film’s villain. Their enviable relationship (you know, other than always being surrounded by demons) has always brought real substance and emotion to the franchise, as well as the sense of how truly good these people are amidst all the evil they deal with. The audience actually cares about them, a rarity in the genre, thanks to years of character building and always solid performances from Wilson and Farmiga.

That emotional investment is what makes the goofy third act in this movie such a letdown. Chaves previously directed the stealth franchise entry — and dud — The Curse of la Llorona in 2019, but he knows how to make the audience squirm with some icky sequences (my fear of crawlspaces has been validated) and unsettling visuals. However, once we arrive at the final scenes, there’s little that truly terrifies — which is what I come to these films for, other than vintage tie-neck blouses and marriage inspiration. The climax gets a little silly, evoking more eye rolls than gasps. Meanwhile, Arne’s plight feels more like an afterthought than what is theoretically driving the story forward. By its very nature, the evil at the heart of this movie should feel scarier than either The Conjuring’s Annabelle doll or The Conjuring 2’s demon nun Valak, but it never reaches the levels of primal fear its forerunners did.

Quality-wise, The Conjuring: The Devil Made Me Do It resides squarely in the middle of this eight-film universe, creeping past the spin-offs and sneaking up on the pair of movies at the center of the series. With its third-act stumbles, it never quite catches either The Conjuring or The Conjuring 2, but it proves there is still spirit left in this franchise. James Wan set the bar high, and even a film that misses those heights is still among the better studio horror offerings thanks to the grounding presence of Wilson and Farmiga and their beloved characters.

Classic Corner: How Green Was My Valley

How Rambo Turned a Complicated Antihero into Agitprop

The Thirstiest, Most Comforting, and Variously Joyous Moments of 2020 in Movies