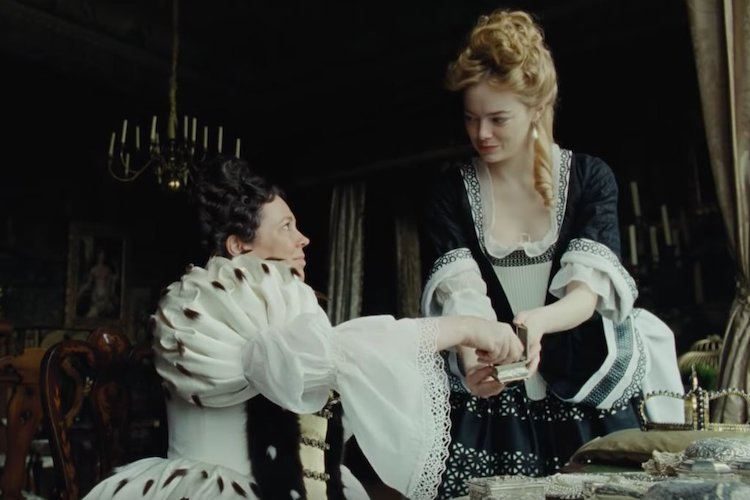 You wouldn’t want to make them the staple of your cinematic diet, but movies where the main characters are all corrupt or vain are often satisfying because they let us enjoy the audacity of bad behavior without suffering the consequences of it. Never is that more true than when the people in question are politicians or other elites, as in the immensely entertaining The Favourite, telling the roughly fact-based story of two women vying for the affections of England’s Queen Anne in the early 1700s. It’s from director Yorgos Lanthimos (The Lobster, The Killing of a Sacred Deer), no stranger to dark comedy, but with all of its cutthroat machinations, pathetic figureheads, and behind-closed-doors absurdity, you’d be forgiven for assuming it came from the minds behind The Death of Stalin and HBO’s Veep.

When we begin, Queen Anne (Olivia Colman) is physically frail, suffering from gout and other ailments, hopelessly neurotic and self-doubting. Her best friend since childhood, the iron-willed Lady Sarah (Rachel Weisz), duchess of Marlborough, gives Anne unflinchingly honest advice, basically running the kingdom through her and inspiring as much terror in the hearts of the royal servants as the queen does. Politically, Sarah and prominent parliamentarian Lord Godolphin (James Smith) favor continuing the war against France, even if it means raising taxes to finance it. (There was a time when nations didn’t go to war if they could’t pay for it.) The queen leans toward reconciliation, but she’s putty in Sarah’s hands.

Lady Sarah’s security is threatened when her cousin, Abigail (Emma Stone), a gentlewoman whose family has fallen on hard times, shows up wanting whatever menial palace job she can get. Assigned to be a skullery maid, she starts looking for ways to be noticed by Anne and succeeds before very long. Robert Harley (Nicholas Hoult), a member of the opposition party and a proponent of peace, sees his chance to sway the queen’s opinion and recruits Abigail to help undermine Sarah’s influence.

You see how this could be a lot of fun (for the audience, not the characters). Sarah and Abigail are well-matched connivers, and there are wonderfully fraught scenes where they practice pigeon-shooting while subtly threatening one another. Weisz and Stone are perfect in the roles, the former regal and stately, the latter more of a girl-next-door, get-down-in-the-mud type, both fiercely intelligent and formidable. And I haven’t even mentioned that their triangle with Queen Anne isn’t just political but romantic…

The queen, not nakedly ambitious or duplicitous like they are, is pitiful in other ways. She orders a page boy to look at her, then screams at him for looking at her. When a public appearance grows awkward, she pretends to faint. Well aware that sugar upsets her stomach, she has servants standing by with puke buckets so she can heave her cake and eat it too.

Most of this is played for laughs and succeeds in that way, but Olivia Colman also brings real pathos to the role. We come to understand the loneliness of being a queen and the tragedies this particular queen has endured, many of them related to her gender. More than Abigail and Sarah, Queen Anne emerges as a sympathetic figure whose awfulness can be ascribed to her history. But all three women share in the indignities women suffered in that era, and one of the film’s many pleasures is seeing them make the most of what little power they have. You’d still rather be a man than a woman in the 18th century, but you’d think twice if being a man meant you’d run afoul of any of these three.

The screenplay, written by historian Deborah Davis and punched up by Tony McNamara (with Lanthimos’ input, one suspects), has something else on its mind, too: the sheer ridiculousness of the royal court. While the women are plotting and stabbing each other in the back, the bewigged fatheads of parliament have obscene feasts and indoor duck races, and worry about their makeup. In one entirely unexplained scene, they revel in throwing fruit at a fellow lord who’s naked except for his wig and apparently enjoying whatever this game is. The dance steps at a formal ball are Monty Python-level silly and thus hilarious on two levels: the level where silly dancing is always funny, and the level where royalty is ludicrous.

I also enjoy the way the movie is shot (by cinematographer Robbie Ryan), using only natural light and candles for authenticity, often with fisheye lenses that give you the feeling you’re watching surveillance footage. We are flies on the wall for all the funny, messy, shocking, tragic, and slapstick events connected to a government full of Machiavellian grifters. Thank goodness it all happened 300 years ago and has no relevance now.