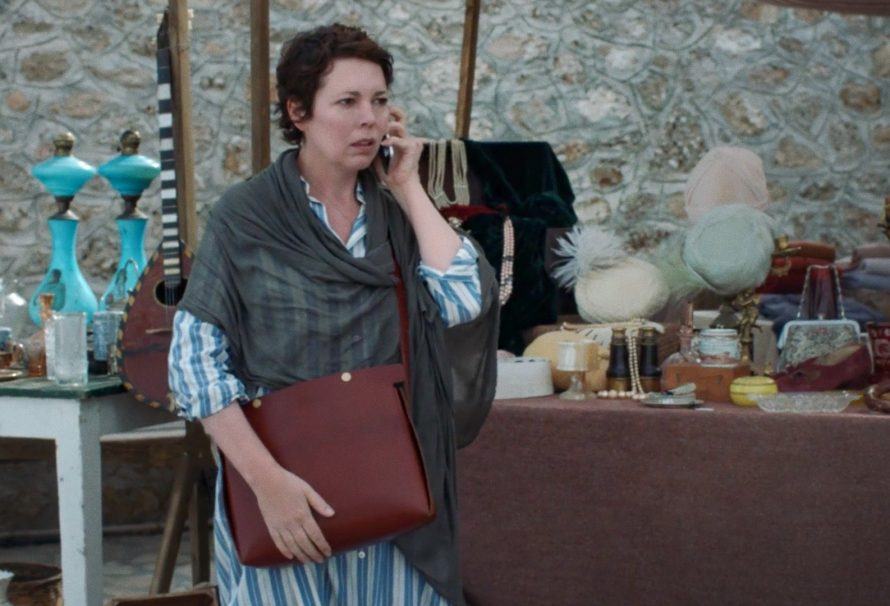 “I’m really tired. I’m like scary tired,” shares Nina (Dakota Johnson) to newfound vacation friend Leda (Olivia Colman), who gently replies “I remember.” These two seemingly polar opposite women – a twenty-something new mother from Queens and a forty-something academic – crash into each other’s lives on an idyllic Greek island in Maggie Gyllenhaal’s complex adaptation of Elena Ferrante’s The Lost Daughter. Gyllenhaal, a mother of two herself, explores the darker side of motherhood as these two bond over one fateful summer.

The film begins in total darkness along with the eerie sound of a foghorn and waves before the camera lands on a close-up of Colman’s distressed face. Clad in white resort wear, she makes her way down the beach where she passes out at the wave’s edge. Before we know who this woman is and what drove her here, Gyllenhaal cuts to a much happier close-up of Colman in sunglasses driving a sunny road, her head out of the car engaging in the pleasures of life. Throughout The Lost Daughter Gyllenhaal and cinematographer Helene Louvart masterfully utilize close-ups to wring every detailed emotion from the faces of its leads. Like Gloria Swanson said, we had faces then. Thankfully, Gyllenhaal and Louvart know we still do.

Colman’s Leda is a firecracker, one fuse away from exploding. An academic on sabbatical, her main companions for the summer are her rental’s grizzled, sun-fried groundskeeper Lyle (a soulful Ed Harris) and an overly eager waiter ​​named Will (Paul Mescal). Leda is content with this solitude though, and it’s a pure delight to watch her body floating in the water, her black bathing suit contrasted with the blue-green of the ocean, or lounging in a chair on the beach indulging in ice cream. These pleasures are short-lived once she meets Nina and her boisterous family.

Again Louvart uses tight close-ups as we watch Leda observing these buoyant young people, zooming in on Nina’s joyful face, her thick eye makeup, her breezy smile. If Leda is a firecracker, Nina is a sparkler. Her glow comes in bursts, shines so bright it fizzles almost immediately. Between moments of beach goal frolics in the water, we see her fight with her husband and grow weary of her screaming child.

There is a deep melancholy to the way Leda watches Elena, Nina’s daughter, playing with her mom. Behind her eyes there are levels of pain and longing. Soon we’ll learn these wistful gazes are filled with, if not quite regret, then heavy reflection on pained choices from her past. These are brought forward in her mind when Elena goes missing from the beach one day. A seamless cut introduces us to a younger Leda, played with the utmost verve by Jessie Buckley, searching for her own lost daughter many years earlier. Buckley and Colman are completely in sync as Leda at both ages; there is fire in both their eyes, lit by a ferocity and intelligence that refuses to be dampered. Through their eyes shine layers of internal conflicts, brewing beneath the surface.

Thinking back on this time in her life, Leda confides in Will one drunken evening. Of her children she laments, “Oh the poor creatures that came out of my belly. The bits I find the most beautiful about them are the bits that are alien to me. I don’t have to take responsibility for that.” Colman is an actress who can do it all: quick quips, banter, impassioned speeches. But in this monologue we see the full force of her prowess. It’s in the lilt in her voice as delivers the lines, the lightness and mystery of it, despite the weight of what she’s revealing about herself as a mother; she’s the torched meringue that sits on top of a baked Alaska.

Later, when asked by Nina about her time as a mother, she recalls, “It felt like I was trying to explode and then I exploded.” What The Lost Daughter dares to examine is the mental toll of child-rearing. The kids are always screaming in their mother’s faces, hitting them in the arms, their backs. There are moments of tenderness as well, but what’s brought to light is just how much children need to take, and how hard it can be for some mothers to focus on the unseen love they receive in return. For some, maybe even if they can feel it, it will never be enough.

The Lost Daughter peels back the poetic idea of a mother’s unconditional love, revealing prosaic truths and harsh realities we often shy from. It shows that parenting is a nightmare, its rewards are not always as immediately fulfilling as we’re sold. Whether they come naturally, are hard-fought, or shirked away, these connections we have to our family will always be with us. It never passes.

“The Lost Daughter” is in theaters now. It streams on Netflix on December 31.