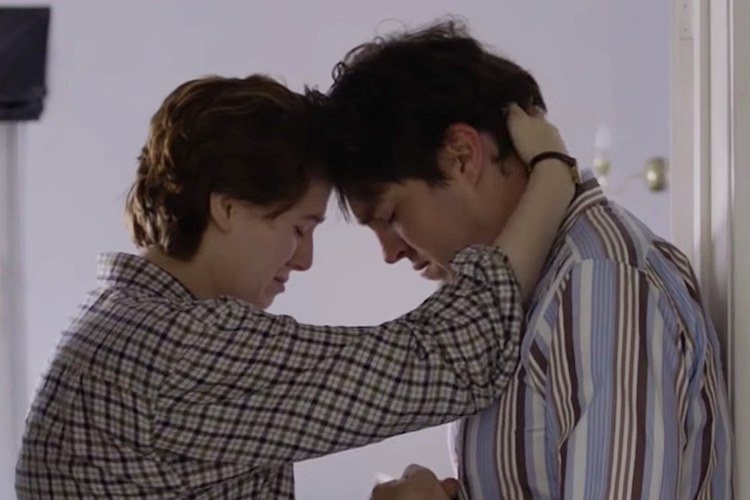 The Souvenir — British filmmaker Joanna Hogg’s haunting semi-autobiographical fourth feature — takes its title from a painting Hogg was taken to see by an older man she was dating in her early 20s, while she was attending film school in London. The Rococo painting is housed in The Wallace Collection, and it depicts a young noblewoman carving the initials of her beloved into the bark of a tree, wholly consumed by her act of devotion. It’s also one of the places Hogg’s proxy, aspiring filmmaker Julie (Honor Swinton Byrne), visits in the throes of her tumultuous love affair with Anthony (Tom Burke), an older manic-pixie-dream-man type whose approval she so desperately craves.

Set in the early 1980s, but without being heavy-handed about it, The Souvenir is a dreamy but distant ode to a difficult time in Hogg’s life, a testament to the ways she was shaped by this formative but ultimately fleeting relationship. The souvenirs she’s taken forward with her from this relationship will lead her (and presumably Julie) to undergo extensive therapy, but they will also guide her interests and aesthetic as a filmmaker decades down the line. These weighty ideas concerning art and the artist are contemplated throughout the film: Characters spend a good deal of time discussing the importance of having experiences, whether or not it’s possible to make compelling work if it’s outside your own range of experience, and whether or not youthful sincerity is a boon or a curse.

Julie, for one, has no shortage of sincerity, but she’s also lived a sheltered, privileged life in London’s affluent Knightsbridge neighborhood, and she’s eager to make art that goes beyond her limited scope of vision. She’s attending film school and looking for support in making a gritty film set in the working-class community of Sunderland, and time and time again, she comes up against people (read: older men, both at her school and in her personal life) who ask her if it wouldn’t be better for her to stick to the things she knows. “Anyone can be sincere,” Anthony tells Julie a bit scornfully, after she invites him to read her film proposal, and he knows he’s hitting her in a particularly sensitive area with his pointed criticism that she’s all too ready to accept.

Anthony is, in many ways, not a lover but an intellectual ideal for Julie: He has — or at least claims to have — a fancy-sounding job with the government, has decidedly highbrow taste in movies, dresses like a male resident of Grey Gardens (lots of excellent and highly eccentric vintage), is always whisking her off on capital-A Adventures, has an element of danger about him, and expresses himself with a practiced and proud arrogance that is especially impressive to artistic but naive young women. She’s out of her depth — or, more to the point, is made to feel like she is — but she’s more than happy to tread water and follow his lead. She doesn’t necessarily want a romantic relationship with him at the outset, but for the sake of experience (and because he’s exciting), she allows him to insinuate himself into her life and then into her bed.

What she doesn’t realize, despite warning signs that will be obvious to anyone who’s ever lived with an addict, is that he’s got a major heroin problem (she only finds this out via a conversation with a hilariously pretentious friend of his; fine work, Richard Ayoade). Hogg does a masterful job at capturing the jagged rhythm of this type of relationship. There are days of calm between them that Julie chooses to remember and idealize, and then there are spurts of violence that she’d rather forget. Hogg and cinematographer David Raedeker show flashes of the worst between the characters, but they prefer to linger on the aftermath — a mirror that’s intact throughout most of the film and then ominously cracked in the background of a later shot; a ragged note for Anthony left flapping in the wind on Julie’s door when he doesn’t come home. These are the kinds of images that last in a person’s mind, even decades down the line after the rest of the story begins to fall away — the kinds of images our minds don’t delete in the self-editing process.

Fittingly, Hogg presents the story of their coming together and eventual unraveling in a non-linear fashion, as if she and Julie are dusting out the deepest corners of their intertwined subconscious, conjuring faded but still raw decades-old memories directly onto the screen and examining them from a safe distance. Distance is consistently prized in Hogg’s aesthetic, even as she’s weaving this incredibly intimate tale for us: Characters are shot within a single frame while in different rooms, and are rarely captured in close-ups. Julie is constantly observing the tumult of the outside world (even the 1983 car bombing at Harrod’s) from the tiny window of her posh studio apartment. The characters are rarely glimpsed outside, and there are so many doors being constantly closed and opened.

Obviously, none of this would work if it weren’t for the compelling performances of the actors we’re trapped in these spaces with. Burke is so fearless in his performance as this highly unsympathetic, highly calculating character, and Swinton Byrne (yes, daughter of Tilda, who turns in a marvelous against-type performance in a supporting role here) turns in a shockingly assured debut performance as a young woman who is anything but. Here’s looking to The Souvenir: Part II…