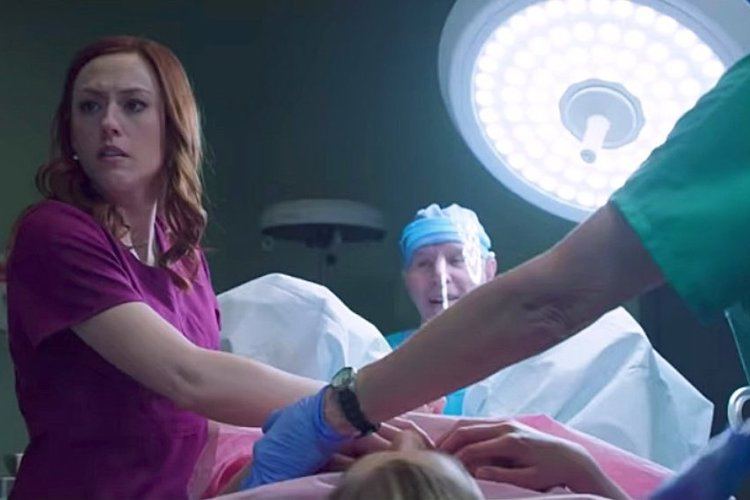 The interesting thing about anti-abortion propaganda film Unplanned is how little it tries to persuade anyone of anything. Preaching to the choir, it presupposes that everyone already agrees abortion is murder and that no further discussion is necessary to prove it. It also assumes you believe that Planned Parenthood is evil, and doesn’t get around to smearing the organization until the second half — and even then the most egregious of PP’s offenses are attributed to a rogue, overzealous PP agent.

But the movie isn’t just bad at being propaganda, of course; it’s also bad at being a movie. Written and directed by Chuck Konzelman and Cary Solomon, it has the exact look and feel (except for the abortion scenes) of a movie made by a church (any church) for Sunday School purposes: bland acting, boring writing, everyone doing their best but simply not being very good at the things they’re trying to do, bless their hearts. And that’s before the movie even gets to its religious angle, where things only get goopier.

It’s the true-ish story (one with some holes in it) of a woman named Abby Johnson (Ashley Bratcher), the director of a Planned Parenthood office in Bryan, Texas, who became a staunch abortion foe once she actually saw an abortion. In flashback, she tells us of being a carefree college student who became a PP volunteer after seeing a booth on campus and being told that PP wants to reduce the number of unwanted pregnancies by providing access to birth control (which is true and which no one in the movie tries to refute).

While acknowledging that PP provides other services besides abortions, the movie doesn’t depict them, or even mention what they might be, lest the target audience (people who’ve been conditioned by Fox News to think PP is just an abortion factory) start to get some vague idea of what PP actually does. Abby quickly rises in the ranks at the clinic, mentored by Cheryl (Robia Scott), who we know is the villain because she has black hair and pale skin. “Abortion is what pays your salary!” is the sort of thing she says to Abby. Later, when Abby betrays Planned Parenthood, Cheryl warns that “we’re part of a billion-dollar corporation” and “one of the most powerful corporations on the planet,” so Abby better watch her step. “Soros” is mentioned (no first name necessary), a dog-whistle for ultra-conservatives that means “rich Jews trying to destroy America through liberalism.”

For abortion opponents, the movie is a pleasant (except for the abortion scenes) little sermon and a chance to have their views reinforced unquestioningly. For those not opposed to abortion or undecided on the matter, it’s a chance to watch wooden actors recite clunky dialogue featuring claims that don’t even sound true. It reminds me of the anti-Mormon films and literature that used to get passed around: convincing if you don’t know anything about the subject, ludicrous if you do.