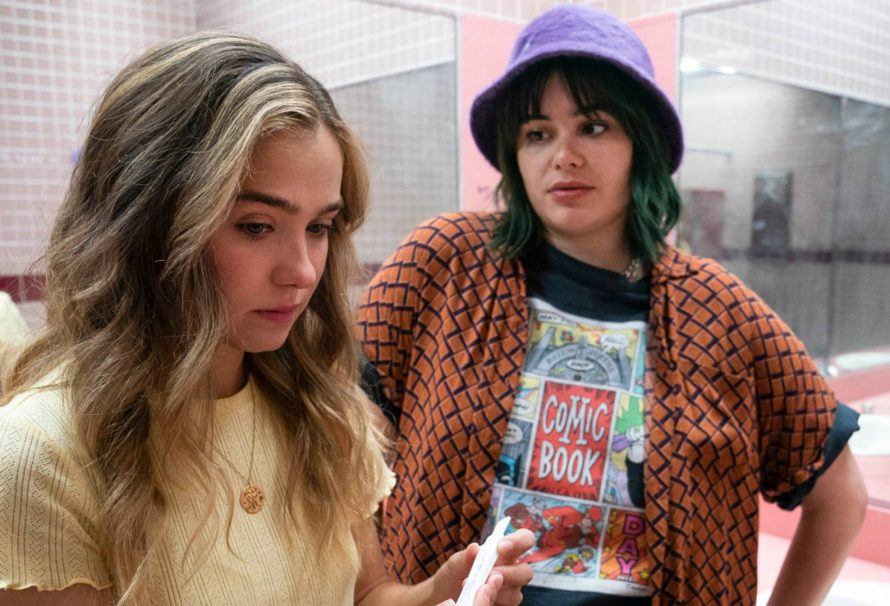 In a way, you could think of Unpregnant as the comic alternative to Eliza Hittman’s heartrending drama Never Rarely Sometimes Always, from earlier this year. Like Hittman’s film, Unpregnant follows a pregnant teenager and a friend traveling across state lines to receive an abortion; both films also address the scarcity of options for young women who need safe, legal abortion services.

While Hittman’s drama deals with the topic of abortion through a social realist lens, Rachel Lee Goldenberg’s adaptation of Jenni Hendriks and Ted Caplan’s YA novel does so as a wild road trip comedy. That isn’t to say Unpregnant diminishes the seriousness of its subject through this treatment – quite the opposite. The premise, that a pregnant 17-year-old living in Missouri would have to drive all the way to New Mexico to get an abortion without parental consent, is itself absurd. But it’s true, nonetheless. Every development added on top of this fact serves to highlight that silliness even more.

The seventeen-year-old in this case is hyper-responsible Veronica (Haley Lu Richardson), a popular overachiever who gets pregnant by her doofy boyfriend, Kevin (Alex MacNicoll). Veronica has no plans to keep the baby, and meticulously plans a road trip from her home in Columbia, Missouri to Albuquerque, New Mexico, the nearest Planned Parenthood location where she can obtain an abortion without having telling her hyper-Catholic parents.

Veronica needs help making the journey, but fears judgment from her family, friends and boyfriend. Her only option is outspoken, nerdy Bailey (Barbie Ferreira), a childhood friend who Veronica’s long since grown apart from. Bailey grudgingly helps Veronica, and the girls reconnect while encountering all manner of situations and characters, including a clingy Kevin, a militantly pro-life couple (Breckin Meyer and Sugar Lyn Beard) and a grumpy-but-supportive limo driver (Giancarlo Esposito).

The success of Unpregnant hinges on the friendship chemistry between Veronica and Bailey, and Richardson and Ferreira make a great pair. They each have their foibles; Veronica is oddly naive for being so driven, and Bailey is obnoxious, bordering on selfish at the start of the trip. However, once the pair hit their stride, they bounce well off each other. Richardson brings her infectious enthusiasm to a role that could’ve easily felt grating, and Ferreira makes a believable loudmouth teenager.

The movie’s treatment of abortion is non-judgmental and calm. Unpregnant isn’t a movie about a young woman faced with a difficult choice. Rather, it’s about someone who’s already made that choice, and is trying to get the people around her to respect that decision. There’s no last-minute histrionics or moralizing about Veronica’s unborn child. Once she finally makes it to the clinic, Veronica’s experience is matter-of-fact and professionally handled. It’s refreshing to see this subject portrayed in a way that asserts the main character’s independence, rather than making her a victim or an irresponsible woman-child.

Unpregnant feels like a YA adaptation in the best sense. It takes a big subject that applies to its core audience, and normalizes the experience –  while also pointing out real-world problems surrounding it. The movie is a fun comedy, but it takes its central topics of abortion and female bodily autonomy seriously. Veronica and Bailey’s trip is an absurd adventure as well as a bonding experience, but the movie never lets us forget that the “absurd” part of that statement should never have to enter the equation in real life. Veronica and Bailey’s story only exists because it’s impossible for Veronica to live out a simpler version of it.