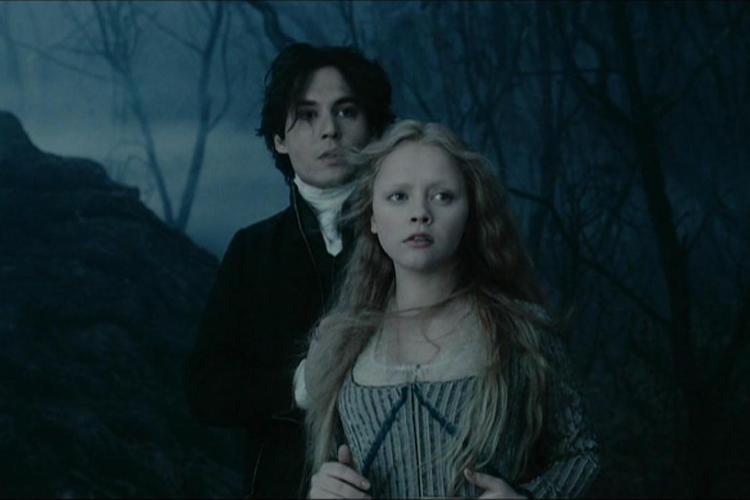 Washington Irving’s 1820 short story “The Legend of Sleepy Hollow” is a classic of Gothic horror, an atmospheric and ambiguous tale about a schoolmaster named Ichabod Crane who encounters a possibly supernatural foe known as the Headless Horseman. Tim Burton’s film Sleepy Hollow, released 20 years ago this month, only barely resembles its source material: It’s a story about a New York City detective, Ichabod Crane (Johnny Depp) who is assigned to investigate murders occurring in the titular upstate New York town, perpetrated by a very un-ambiguously supernatural Headless Horseman (Christopher Walken).

The film’s script by Kevin Yagher and Andrew Kevin Walker takes more than a few liberties with Irving’s story, as they and Burton expand the tale with their own creative tics and influences — everything from slasher movies to Hammer horror and more. What’s most interesting about the movie in retrospect is how much film noir made it in to the mix, combining with Burton’s aesthetic to create a subgenre all its own: Gothic Noir, a combination of a Victorian-era (or approximate) setting with Gothic horror characters and situations. Sleepy Hollow remains the best expression of Gothic Noir, using the tropes (and source material) of the past to create something new.

Walker, who wrote 1995’s serial killer noir Seven, takes the elements of that film and fuses them to Burton’s Gothic vision for Sleepy Hollow. Like any good noir, the film begins with a murder under mysterious circumstances, and hints almost immediately at a larger conspiracy within the town. As the detective protagonist, Ichabod is a rationalist who insists that authorities “must use [their] brains” and apply science to every situation. As a result, the movie becomes a procedural, following Ichabod through every deductive step he takes, ranging from crime scene inspection to autopsies to interrogation to research and more. Ichabod is distracted by several red herring characters, especially a femme fatale in the form of Katrina Van Tassel (Christina Ricci), whose trustworthiness he questions. Though the murder weapon is the demonic spirit of a dead warrior (post-war soldiers being a staple character in noir), the ultimate murderer is a human, Lady Van Tassel (Miranda Richardson), a witch who controls the Horseman and is revealed to have used him to obtain inherited land and wealth, which is a very noir-ish goal.

The noir elements aren’t all at a script level, however—cinematographer Emmanuel Lubezki’s photography is intentionally desaturated and monochromatic, and a good portion of the rest of the film’s crew also worked on Burton’s Batman (1989) which had its own ‘40s pulp noir aesthetic, a vibe seen in this movie’s colonial sets. Noirs are also concerned with a city or town acting as proxy for the changing political and social state of the world, and Sleepy Hollow follows suit by being a town caught between turn-of-the-century scientific progress and old-world mysticism, with room for only one victor.

The horror elements of Sleepy Hollow are more easily apparent, but their merging with the noir aspects is what gives the film its unique flavor. The movie is one of Burton’s most unquestionably horrific, the Horseman a demonic character who chops his victims’ heads off in gory detail. The scientific devices Ichabod uses (which he explains are of his own design) look less like Tesla and Edison machines and more like things from the Universal horror films. Some of these devices Ichabod wears, augmenting and changing his silhouette into something grotesquely insect-like, making the character a charter member of the Burton Misfit club. The sets within the town have a good deal of Hammer European Gothic mixed in, while the woods are full-on German Expressionist, including a windmill that looks almost exactly like the one in James Whale’s Frankenstein (1931).

Horror isn’t the only blended element of the movie, either — the film has the arch comedic tone that used to be Burton’s speciality, thanks to an uncredited rewrite by playwright Tom Stoppard. The cast play to this approach, winking at the absurd situations they find themselves in without ever breaking the fourth wall.

With such an odd blend of tones and elements, Sleepy Hollow was successful and generally well-received, but its true legacy is how that unique blend has continued to be influential. Visually, the film is part of and helped perpetuate the steampunk genre, especially in the design and depiction of Ichabod’s inventions. Subsequent films that evoke classic Universal or Hammer horror owe Sleepy a debt as well, such as 2015’s Victor Frankenstein. The most obvious influence the film has had can be seen in television: HBO’s “Carnivále,” Showtime’s “Penny Dreadful,” and Amazon’s “Carnival Row” are all examples of the same Gothic Noir as Burton’s film, exploring fantasy and horror characters and tropes through a procedural and mystery story lens. Sleepy Hollow’s subtextual look at the end of a century and the changes that come along with it had particular resonance being released as it was at the end of a millennium, and the movie’s continued influence proves that it was indeed a little a-head of its time.

Thanks, Mom: Dumplings and Sons in Bao and Crazy Rich Asians

REVIEW: The Art of Racing in the Rain