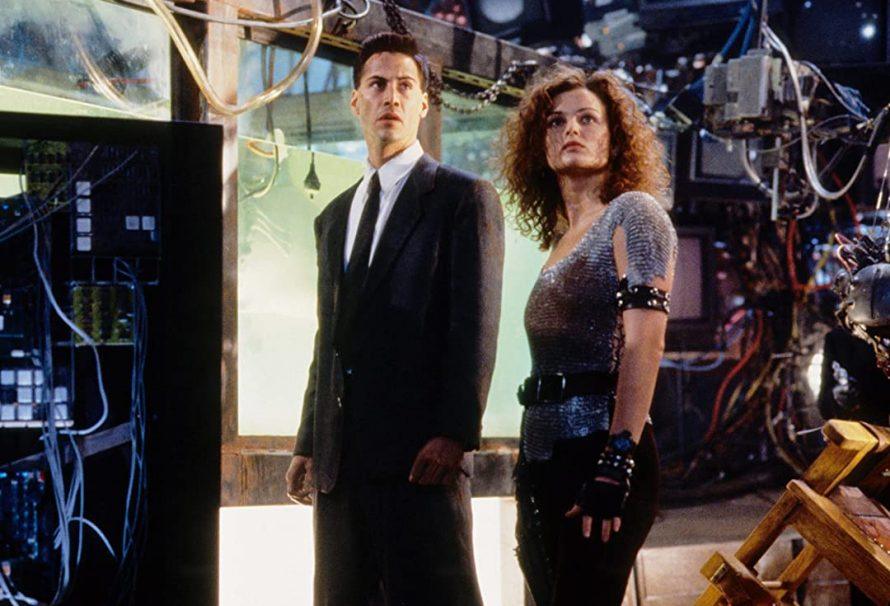 The 1990s were a strange time for filmmakers attempting to understand the Internet. As the technology went mainstream, with more families securing their own connections to the World Wide Web at home and schools adapting their curriculum to include more computer instruction, cinema responded. There were horror offerings: 1992’s The Lawnmower Man, a (litigiously) loose adaptation of a Stephen King short story that wondered about the desensitization made possible through virtual reality; 1992’s Mindwarp, which imagined a ruined world populated by cannibals whose only joys were VR fantasies; and 1993’s Ghost in the Machine, in which a serial killer’s soul gets uploaded in an electrical grid. There were thrillers, like 1995’s The Net, in which Sandra Bullock’s hacker character is targeted for erasure; Virtuosity, in which Denzel Washington tracked a VR serial killer who crossed over into the “real” world; and the now-cult-classic Hackers, in which a group of teenagers led by Jonny Lee Miller and Angelina Jolie worked to reveal a corporate conspiracy.

“Hacking is more than just a crime, it’s a survival trait,” said Darren Lee’s Razor in Hackers, and both that film and others in the ‘90s imagined the Internet and its accompanying tech boom as advances that were simultaneously inclusive, capable of great interpersonal connection, and unsavory, alluring enough to corrupt us. Before Lana and Lilly Wachowski crystallized these concepts in their iconic The Matrix, imagining a fractured world in which humans fought for survival in a bleakly dystopian landscape, there was Johnny Mnemonic.

Also starring Keanu Reeves, Johnny Mnemonic was an unmitigated flop, described by Roger Ebert as a “great goofy gesture” and by Owen Gleiberman as “basically Blade Runner with tackier sets” (Gleiberman also took time to personally insult Reeves in his Entertainment Weekly review, which isn’t very nice). Twenty-five years later, though, numerous elements of pioneering author William Gibson’s adaptation of his own same-named short story feel depressingly relevant. Part of this, of course, is that the sci-fi genre, both in literature and in film, has long warned against our current nightmare of late-stage capitalism. The overwhelming power we hand to gargantuan corporations; the price gouging of pharmaceutical companies; the increasing gap between the rich and the poor. Johnny Mnemonic doesn’t handle any of these elements with much nuance—and yes, at some point we do have to talk about the code-breaking dolphin—but its singularity is admirable, undeniably clunky execution aside.

Arriving in theaters four years before The Matrix, Johnny Mnemonic begins with a lengthy crawl situating us in the “INTERNET 2021” and explaining the divide between corporations and LoTeks, “a resistance movement risen from the streets: hackers, data-pirates, guerilla-fighters in the info-wars.” About half of the world is suffering from nerve attenuation syndrome (NAS), a fatal epidemic nicknamed the “black shakes” that debilitates and kills. No one knows what causes it, but a suspected trigger is the pervasive onslaught of technology, all these wires and cables and frequencies and energy waves, so much electricity crackling through the air. The same advancements that have made everything from video calls to tech-augmented humans normal have also made rich people richer and poor people poorer, forced into living like “rats in the walls of the world.”

With so much strife, businesses hire the Japanese crime syndicate the Yakuza as physical muscle and human couriers as data traffickers. These people undergo surgery to install a port in their skulls (“wet-wired brain implants”) and then they’re available for sale to the highest bidder, transporting data that the corporations don’t trust online, where hackers can access it. The data gets uploaded into these people, they travel to the recipient, and then the password-protected data gets downloaded, wiping their brains clean before the next job. This is the proto-gig economy, and in it grinds Johnny Smith (Reeves, fresh off Speed), who willingly erased all of his childhood memories to make more space for the blueprints, plans, and secrets of companies who otherwise wouldn’t care whether he lives or dies.

When we meet Johnny on January 17, 2021, he’s living the good life: lounging in a bed with black satin sheets at the hoity-toity New Darwin Inn, chomping on a club sandwich, sipping on cold champagne, cavorting with a high-price escort. With one more job, he’ll have enough money to remove the storage implant and get his childhood memories back—but the gig he signs up for is far more trouble than he anticipated. His storage capacity is only 160GB, but this job is 320GB (treated in the film as a huge amount of data; now, you can buy 500GB external hard drives for only $100 or so). It’s dangerous to absorb more data than you should—data corruption can ruin an upload, and “synaptic seepage” can kill a courier—but he does it anyway. He needs the money.

Keanu pops in a mouth guard, straps on a VR headset, and delivers the line “Hit me!” in the most Keanu way possible, with that patented mixture of intensity and bemusement. Multicolored graphics—animated figures, numbers and letters, hazy outlines of people—represent the streams of data blasting into Johnny’s brain, and a printout of three images captures the secret download code. But an attack by the Yakuza interrupts the job, tearing the printout in half and encouraging Smith’s escape to the “Free City of Newark,” where the recipient of the data awaits. Now pursued by the Yakuza, double-crossed by his handler, and tied up in a mysterious scheme involving the all-powerful PharmaKom Industries, Smith becomes more involved than he ever anticipated in the efforts of the LoTeks. The 320GB of data are incrementally leaking out of Johnny’s storage system and poisoning the rest of his consciousness, but that same data might hold the key to reversing unfathomable inequality.

It is a testament, although a dismal one, to the forward-looking nature of Gibson’s 1981 short story and 1995 film script that his questions about economic disparity, omnipresent tech, and pharmaceutical price-gouging remain timely today. A principled doctor played by Henry Rollins complains about PharmaKom charging $2,000 per dose for an NAS treatment; anyone familiar with the drastically increasing cost of insulin in recent years will probably nod along. Johnny’s lengthy rant about wanting to be part of the world’s 1% (“I want room service! I want the club sandwich! I want the cold Mexican beer! I want a $10,000-a-night hooker!”) feels particularly poignant, the tantrum of someone realizing the illusion of the American Dream has failed them. How leader of the LoTeks J-Bone (Ice-T, giving the anarchy symbol inked on his forehead a surprising amount of gravitas) hacks the corporate-controlled news networks to “recontextualize it, then spit the shit back out at them” brings to mind the legions of podcast hosts and YouTube personalities using the same tactics for myriad political ideologies. And protestors in face masks face off against police in riot gear, demanding greater resources for their crumbling lives, seems … familiar.

But other, unwieldy elements of Johnny Mnemonic threaten to overshadow Gibson’s spins on the questions inherent to the sci-fi genre. The LoTeks never quite make sense, with their black face paint, outdated weapons, and sky city made out of repurposed trash; are they meant to hate technology inherently, or only hate how corporations use it? Their motivations lack clarity—which could be said for most everyone in Johnny Mnemonic, actually. The baddies at PharmaKom are faceless, so their malevolence isn’t quite real. The Yakuza are stylishly evil (a laser whip as an accessory is admittedly pretty sick, and their black-leather outfits bring to mind the work costume designer Kym Barrett did for The Matrix trilogy), but superficially developed. Dolph Lundgren is having a great time playing an assassin who weaves a zealous strand of Christianity into his killing, yelling “Come to Jesus!” before he attacks, but his campiness doesn’t sync with the film’s more sincere subplot about the sprawling effects of the NAS pandemic. I lied earlier: The less said about that code-breaking dolphin who serves as one of the film’s two deus ex machina devices, the better. And there’s a tidiness to the conclusion of Johnny Mnemonic that feels both rushed and at odds with Gibson’s original text, which didn’t dare to believe that an entire world order could be subverted in the span of 48 hours.

Johnny Mnemonic is no Matrix; its world-building lacks the specifically nuanced grit and transformative hero’s journey that the Wachowskis would bring to their own exploration of similar concepts. Gibson would never write another film screenplay. But as the Wachowski sisters acknowledged to The New Yorker in a 2012 interview, Johnny Mnemonic was a template for what they were trying to build with The Matrix—a model they would eventually embellish and tweak in their own intentional ways. The work Reeves does in the former film clearly informs the latter (consider a scene where he goes through a tai chi sequence to calm himself during a nosebleed), and the ideas Gibson thrust forward furthered the cyberpunk conversation onscreen for years to come. “I have to get online!” Johnny Smith yells. And who can’t relate to that?

“Johnny Mnemonic” is streaming on Crackle, Pluto TV, and The Roku Channel.

God Help Bobby and Helen: Panic in Needle Park at 50

Snatch at 20 – and the One Reason It Still Matters

The Spellbinding Mediocrity of Legend

Review: Derek DelGaudio’s In & Of Itself