It’s not like there had never been a twist ending before The Sixth Sense, you know? Thirty-nine years earlier, audiences lost their collective minds when the killer in Psycho turned out to be Norman Bates in a dress; 40 years before that, The Cabinet of Dr. Caligari shocked viewers with the revelation that the main character had actually been a patient at a psychiatric institution the entire time (or had he?)

But for some reason, The Sixth Sense, released 20 years ago this summer and directed by a brash young filmmaker by the name of M. Night Shyamalan, made an undeniable impression. That the film’s secret was maintained long enough for weeks’ and even months’ worth of new audiences to experience the twist for themselves is a testament to what a different world existed in 1999. It’s difficult to imagine that a horde of Twitter trolls wouldn’t ruin the surprise on a global scale within a week if it came out today. But it also demonstrates a concerted effort and a rare expression of goodwill on behalf of filmgoers to preserve a fairly unique cinematic viewing experience.

And the novelty factor of The Sixth Sense cannot be overestimated, something that led it to earn over $670 million at the box office and turn both its pint-sized lead actor Haley Joel Osment and its director into stars overnight. But the thing about novelty in filmmaking that studios never seem to understand is that when you try to repeat it, it isn’t novel anymore. A cinematic phenomenon is like lightning in a bottle: You can’t just reproduce it whenever you’d like. For the next few years after The Sixth Sense, studios were tripping over themselves trying to reproduce the magic of this film by flooding the market with new twist endings, each more absurd than the last.

M. Night Shyamalan himself has spent a large portion of his career desperately chasing the next Sixth Sense high. Of his other films, Unbreakable (2000) and Signs (2002) probably come the closest to constructing the sort of well-rounded narrative that isn’t entirely reliant on a reveal in the last 10 minutes, but none quite match the creative ambition of his first major success. His name has become synonymous with the twist, and it would hardly be unfair to suggest that part of the reason why he’s never had as big a hit as The Sixth Sense is because audiences walk into his films knowing that whatever happens, there’s going to be a surprise at the end. People like to be surprised – only, anticipating the surprise means that there’s really no surprise at all, just an expectation, which is decidedly less fun.

That’s part of the reason why so few of The Sixth Sense’s successors have gone on to great acclaim. But it also has to do with the fact that, with the high demand from studios for movies with a twist, stories were being green-lighted on that element alone, with little thought given to the rest of the narrative. As difficult as it is to imagine The Sixth Sense without its trademark twist, it likely would have still made for a decent film if it had ended in some other way. Likewise, the best of The Sixth Sense imitators have had something else going for them beyond their twist.

The Others (2001) feels the most like an obvious Sixth Sense cash-in: off-putting children, spooky ghosts, and a seemingly derivative “they were dead the whole time” reveal. One can argue whether or not its entirely successful in the end, but it does manage to establish an identity distinct from its illustrious predecessor with the help of a strong lead performance from Nicole Kidman and an appealingly unsettling gothic atmosphere. If anything, the film is strong enough on its own and the laboriously constructed twist overcomplicates matters. In this way, the twist can be its own worst enemy, almost impossible to calibrate correctly. Either it’s been signposted too clearly and audiences see it coming from a mile away, or there are no bread crumbs along the way, leaving viewers disoriented and disappointed.

The key to the twist is misdirection. It’s a magic trick – the director has to make you observe one thing while really something else is happening. And the successful execution of this requires that the magician time his reveal perfectly. In Identity, James Mangold’s 2003 psychological thriller, the biggest issue is that not only does he place too much confidence in the impressiveness of his twist, he gives it away too early. The film plays out like a traditional murder mystery set in an atmospheric motel, only we discover much earlier than we should that the characters are all actually just facets of a serial killer’s fractured mental state, multiple personalities that exist only in his mind. With this revelation, the tension in the film is immediately released, like air being deflated from a balloon. None of these people we’ve come to care about exist, so any stakes that had been developed over the course of the film are immediately removed and the climax falls disappointingly flat. 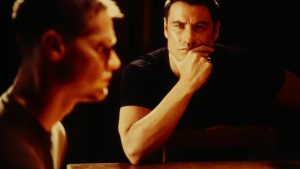 But maybe we’ve been overthinking this whole twist thing all along. Maybe the problem is that there aren’t enough twists. John McTiernan’s Basic (2003) attempts to circumvent the issue by creating a film that includes all the plot twists. There’s almost no point in trying to explain what actually happens in Basic, except that it’s a never-ending series of false identities, faked deaths, and covert operations that result in the plot stopping in its tracks no less than seven times to hit the reset button. In an attempt to shock and awe the audience, Basic succeeds only in creating an incomprehensible mess where the viewer can extract almost nothing of value.

There were other twist endings from this period that we could examine: Shyamalan’s own disappointing The Village (2004), where it turns out that they’ve been living on a weird, old-timey wildlife reserve in the modern era the whole time; or The Gift (2000), where a character who plays a key role in the third act is discovered to have actually killed himself earlier in the film. Thankfully, now that 20 years have gone by, the trendy status of the twist ending has dissipated slightly, creating a cinematic environment where big reveals are used when the storyline justifies it and not because major studios see them as an opportunity to print money. Then again, these things come in cycles; the baffling Serenity recently released may not be the success that kickstarts the twist industry into action, but it’s inevitable that one day we’ll again be subjected to marketing campaigns revolving around the “twist ending that’ll keep you on the EDGE OF YOUR SEAT” that made the early 2000s such a panic-inducing time to go to the movies.