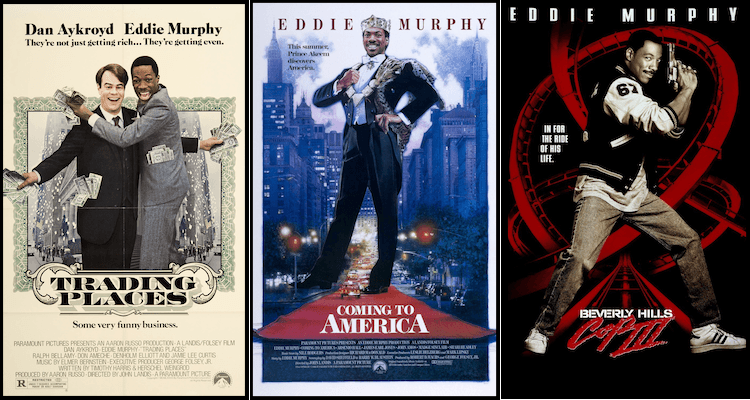 After Eddie Murphy(‘s social media team) tweeted then deleted a tease about it, Paramount Pictures confirmed the implausible: a sequel to 1988’s Coming to America is currently in development. The announcement raised the expected questions. Will Arsenio Hall return? Does McDonald’s-knockoff McDowell’s serve breakfast all day now? Will the Jheri curl subplot continue? And above all, why? The original turns 30 next year. That’s four Shreks, two Dr. Dolittles and a Norbit ago for Murphy. As of late he’s become a self-imposed recluse, content to impress in the unimpressive Mr. Church and thank the audience for 30 jokeless seconds on Saturday Night Live’s 40th Anniversary Special.

Coming to America represents a very different time in Eddie Murphy’s career and a very different Eddie Murphy. It serves as the middle of a makeshift trilogy, linked not by characters, but collaborators. The triptych charts the uneasy courses of two careers for over a decade, of director and star, and it took one of the few filmmakers with as much personality as his leading man to kick it off.

The most telling anecdote about John Landis comes from an interview with another John, this one Carpenter. He mentions in passing that Landis claims to have convinced the distributor of his first feature to pick up Carpenter’s first feature as well. He follows it immediately with this:

“I don’t remember it that way, but that’s okay; Landis claims a lot of things.”

He lunched with Hitchcock. He shared an elevator with Groucho Marx. He fell off horses in Spain for two years as a stuntman on some of the greatest spaghetti Westerns ever made. He revitalized the blues and saved the careers of countless black musicians. And he’s done it all with an ever-present smirk that dares scrutiny. John Landis is part-ringleader, part-car dealer, born in a suit-and-tie and born to raise hell. The filmmaker made an early name for himself as a comedy anarchist with hits like National Lampoon’s Animal House, The Blues Brothers and American Werewolf in London. His penchant for wanton mayhem — Blues Brothers remains one of few movies to have a designated cocaine budget — earned him both a reckless reputation and the inescapable black mark that stains his name to this day. In 1982, a stunt went horrifically wrong during Landis’s segment of Twilight Zone: The Movie. Three actors were killed and the director would be tried for involuntary manslaughter in 1986. In the meantime, he needed another project and fast.

Trading Places began as a Gene Wilder-Richard Pryor comedy, and it’s not hard to spot the signs. By the time Landis joined, Pryor had bowed out and Paramount suggested a star in the making, a name the director didn’t even recognize. Eddie Murphy joined Saturday Night Live at 19, just after Lorne Michaels and the hallowed original cast left in 1980, and ensured there would be a 40th Anniversary Special. His immediate popularity scored him his feature film debut in Walter Hill’s piss-and-vinegar buddy cop prototype, 48 Hrs. But Murphy was such an overnight talent that Paramount had to screen a work-print of the movie, still in production, to bring Landis up to speed.

Murphy was in and Wilder was out at the SNL star’s suggestion; he didn’t want to look like a replacement for Pryor. The Wilder role was quickly filled by Landis-stalwart Dan Aykroyd, a fellow SNL graduate of a different class.

Trading Places is essentially The Prince and the Pygmalion, where a rich white guy is swapped with a poor black guy, who’s molded into a rich black guy, but only over a one-dollar wager. Lessons are learned. Tables are turned. The bad guy is raped by a gorilla. Blackface happens. Frankly, it’s a minor miracle that Trading Places has gone mostly undiscovered in the Thinkpiece Age, but it’s a smarter movie than ingredients imply, staking a lonely middle ground between the earlier social satires of Preston Sturges and later cause-centric comedies of Adam McKay. Trading Places was the fourth-highest-grossing movie of 1983, giving Landis a reviving hit and Eddie Murphy a ticket to superstardom.

Dan Aykroyd wrote a part specially for Eddie in his next movie, an ambitiously goofy concept called Ghostbusters, but he was too busy starting his own franchise with Beverly Hills Cop, the biggest blockbuster of 1984.

Landis didn’t maintain the momentum so handily. His immediate follow-up, Into the Night, barely opened. The mercilessly publicized Twilight Zone hearings drowned out the moderate success and critical disinterest of Spies Like Us and ¡Three Amigos! Even though the director was acquitted in 1987, the damage had been done. John Landis’s name didn’t mean chaos, comedy or even werewolves anymore — it meant bad press.

Eddie Murphy was gearing up for his directorial debut when he took note of Landis’s plight. As a favor for giving him a chance on Trading Places, Murphy gave Landis a chance on Coming to America.)

Considering it was Murphy’s biggest hit outside Beverly Hills and still is Landis’s highest-grossing movie besides Animal House, it worked out pretty well for both of them.

Coming to America is a modern fairytale about a guileless African prince who goes looking for a bride in the only place on earth named after them: Queens. He may be pampered to the point of having a designated penis-washer on staff, but he’s completely incorruptible — a quality, Landis found, that was not shared by the man playing him. The eager, excitable Eddie Murphy of 1983 was long gone. In his place was a cocky superstar with a ring that required constant kissing. In 1988, Eddie Murphy didn’t know the word defeat. Coming to America remains a snapshot of his highest high. The hints of earlier success — a direct callback that makes this the only other entry in the Trading Places Cinematic Universe — and distant success to come — Murphy’s first time playing multiple roles — hide in plain sight, but Coming to America is prime Eddie. And prime Landis. The movie marked a second wind for the filmmaker, which both parties agreed was better spent apart.

If Landis bristled at Murphy’s transformation, Murphy bristled at Landis’s complete lack of one. To the star, his handpicked director owed him more respect than he got in 1983. The pair clashed off-camera to the point that Murphy told Rolling Stone he should’ve left Landis in the dire straits where he found him.

The next year, Eddie Murphy finally did take the director’s chair for his dream project, a big-budget period piece costarring the comedy idol he was worried about replacing not five years before, Richard Pryor.

The critical and financial disappointment of Harlem Nights was enough to convince Murphy never to direct again. He retreated to a 48 Hrs. sequel and the diminishing returns of safe, bland comedies.

Landis, in the meantime, geared up for the highest-profile project of his career, a Sylvester Stallone-led adaptation of a classic French comedy. He was excited enough to talk to the press for the first time since his hearing. “Of my movies, Oscar is the closest one to being really, really good,” he promised reporters.

It was his biggest flop since Into the Night. His follow-up, a gangster-vampire movie called Innocent Blood, did worse. So when Eddie Murphy asked him to direct the anxiously awaited Beverly Hills Cop III, Landis couldn’t believe it and couldn’t say no. The script was, at best, legible and he didn’t have much love for the franchise, but Landis figured he could make anything work with Eddie.

The old Eddie, maybe. But the star he found on set was another man entirely. Depressed, sullen, and altogether unhappy, Murphy actively fought any hint of his classic energy in the movie. He told Landis, in what must’ve sounded like a death knell, “Axel Foley is an adult now; he’s not a wiseass anymore.” Murphy wanted to be taken seriously as an actor and decided an anticipated sequel in the series that made him famous as a comic live-wire was the best place to sober up.

As a result, Beverly Hills Cop III feels like a TV edit of itself, with the attitude and edge conspicuously absent. It’s telling that the comedic highlights involve absurd props and unwieldy acronyms. A few clever action scenes show Landis was ready to go for broke, but there’s a gaping hole where the movie’s spirit should be, and it echoes every time a supporting character gets a laugh instead of the star.

Despite Murphy’s claims at the time that it was “infinitely better” than its predecessor, Beverly Hills Cop III barely brought in a quarter of II’s box office. Cop III was Murphy’s biggest flop as a leading man. The sure-thing return-to-form with his lucky charm Landis put the franchise to sleep for 23 years and counting. Further attempts to recapture the magic of his R-rated (or even PG-13) successes landed with louder thuds. Murphy did find success in family-friendly comedies, a phase he’s been in since 1996 and hasn’t cared about since 2003.

Landis directed two more theatrical releases before his own attempt at catching old lightning in a new bottle — the Belushi-free Blues Brothers 2000 — did him in. Like many of his horror-comedy contemporaries, Landis turned to television, directing episodes of everything from Psych to Franklin & Bash. He can often be seen as the liveliest interview in documentaries on horror, special effects, and Z-grade cinema.

The three collaborations can be seen in regular rotation every Sunday afternoon on Comedy Central.

There’s no word on whether Landis might consider Coming 2 America; even Murphy’s involvement is more rumor than report. Though considering Beverly Hills Cop IV came within months of shooting last year, the secluded star may truly be looking to revisit the movies that made him an icon in the first place. If Coming Back to America ever does see the light of day, it’d mark another very different moment in the pair’s respective careers. Maybe it’ll provide a happy ending to the Murphy-Landis trilogy.

Or at least let us know if McDowell’s has a spoon made out of onion rings yet.

Jeremy Herbert lives in Cleveland, where he pretends to understand the ending of Trading Places but doesn’t.