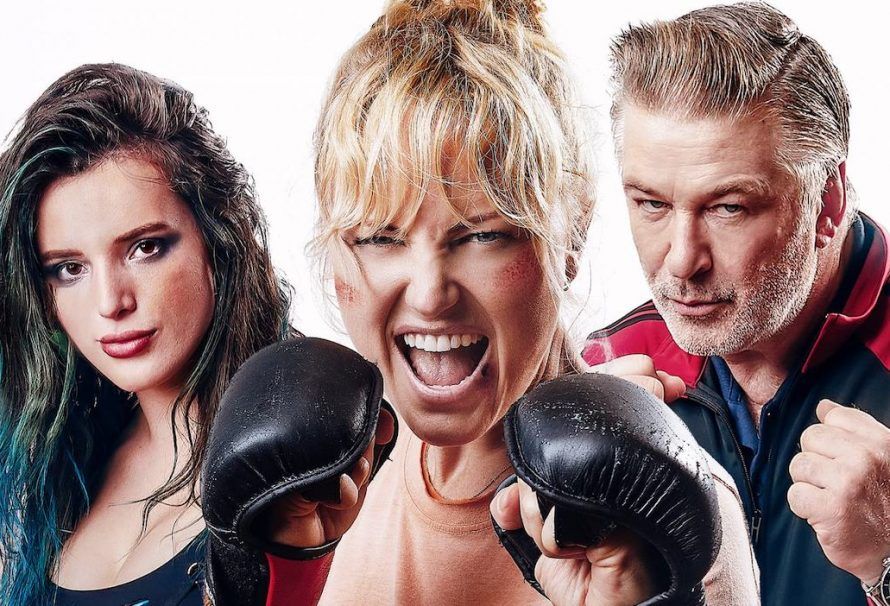 Chick Fight (VOD and select theaters November 13) At a low point in her life, Anna (Malin Akerman) is taken by her more assertive best friend to an underground organization where people engage in physical fights as a form of therapy. It sounds like a female version of Fight Club, but Chick Fight is a lot lighter, both in tone and in worldview, than David Fincher’s nihilistic classic. The illegal cage-fighting operation founded by Anna’s late mother is a supportive place for women to come together and work out their issues, and the main conflict is between Anna and Olivia (Bella Thorne), a hyper-competitive newcomer who wants to change the club’s ethos. There’s a lot of dumb comedy from the washed-up drunk (Alec Baldwin) Anna hires to train her, along with a half-hearted romance for Anna with a bland doctor (Kevin Connolly). The silly jokes and the cheesy empowerment messages are both stale, and Akerman’s boundless energy isn’t enough to carry the thin story. Grade: C

My Summer as a Goth (VOD November 11) Director and co-writer Tara Johnson-Medinger demonstrates a Disney Channel-level sense of Goth culture in this cloying coming-of-age comedy about a teen girl’s toxic romance with her corpse-painted neighbor. Sullen 16-year-old Joey (Natalie Shershow) resents being shipped off to her grandparents’ house for the summer while her novelist mom goes on a book tour. When she meets Victor (Jack Levis), she submits herself to an instant Goth makeover, despite having no affinity for the literature or music that Victor and his friends celebrate. Victor clearly uses being Goth as an excuse to act like a smug douchebag, and it takes far too long for Joey to wise up to his manipulative ways. In the meantime, there are limp jokes about hanging out in graveyards, and even creakier jokes about Joey’s elderly grandparents, who play both bingo and canasta. Shershow is appealing, but the movie is about as lively as the denizens of Victor’s beloved cemetery. Grade: C

The Retreat (VOD and DVD November 10) Although it’s set up as a horror movie about a wendigo attack, writer-director Bruce Wemple’s film is really more about the perils of drinking psychedelic tea. When best friends Gus (Grant Schumacher) and Adam (Dylan Grunn) go on a hiking trip through the Adirondacks for Adam’s bachelor party, a fellow traveler offers them what he claims is a combination of peyote, ayahuasca and mushrooms, which sends Gus into a hallucinogenic spiral that may be a manifestation of “wendigo psychosis.” It’s not clear whether an actual monster is ever present, or if the entire mind-bending descent into violence is just in Gus’ head, but Wemple effectively plays with the shifting barrier between visions and reality, using it to explore the friends’ dysfunctional relationship and Gus’ simmering resentments. When Wemple shows the wendigo onscreen, it’s just a typical goofy-looking low-budget creature, but Schumacher makes Gus’ inner torment genuinely unsettling, and far more memorable. Grade: B-

Asylum: Twisted Horror and Fantasy Tales (VOD November 17) As is typical for anthologies, the quality of the segments here is hit-or-miss, although the ratio skews positive enough to make it worthwhile. Cobbled together from nine unrelated short films produced over the last several years, Asylum feels more like the shorts program at a film festival than a cohesive feature film – and the wraparound segments, starring Raymond Lee as a bitter, demented stand-up comic introducing the various stories, strain to tie the disparate pieces together. But there are plenty of highlights along the way, including the short that was expanded into recent Shudder original The Cleansing Hour (about the creators of a faux-exorcism web series encountering the real thing), a sweet animated piece from Persepolis co-director Vincent Paronnaud about Death bonding with his rebellious son, and a funny Spanish horror-comedy about a man whose wife and mother insist on holding his funeral even though he’s unable to die. Grade: B

Dead Reckoning (VOD November 13) Six months after her parents’ death in a plane crash, teenager Tillie (India Eisley) starts a summer fling with a Nantucket cab driver who happens to be the brother of the terrorist who sabotaged her parents’ plane as revenge for the death of his own father in an FBI operation that Tillie’s father helped lead. (Isn’t that how it always goes?) Neither Tillie nor her new paramour Niko (Riverdale’s K.J. Apa) is aware of the other’s identity at first, which makes for some awkward plot contortions until the big reveal. Niko is conflicted about helping his brother Marco (Scott Adkins, sporting an accent that makes him sound like Borat) plan another attack, and the grief-stricken Tillie is angsty and rebellious for generic teenager reasons. The romance is drippy and dull, there’s no suspense to the slapdash thriller storyline, and the two elements fit together with the same clumsiness as the chemistry-free stars. Grade: C-