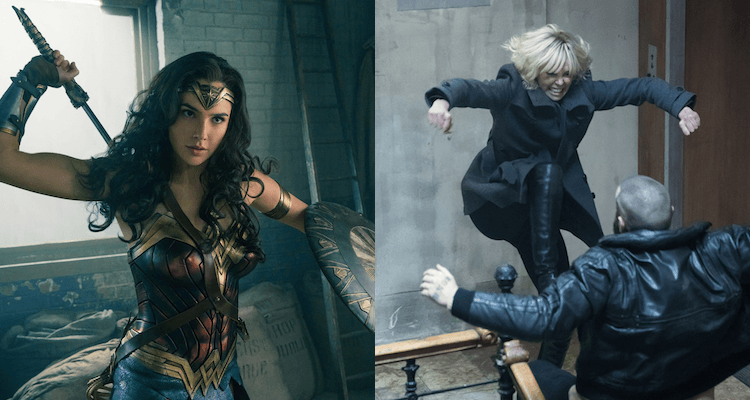 Two of the best movies from this summer, Wonder Woman and Atomic Blonde, have been called by some the “girl version” of earlier movies about characters like Superman or James Bond. Some critics and audiences have argued that if it weren’t for the protagonists’ gender, these movies wouldn’t be remarkable at all. But I would argue that these movies are, like the famous quote, doing everything their male counterparts are doing, but backwards and in high heels. That is to say, they’re all that and more.

These days, comic book movies feel about as routine as spy movies. Both are now standard summer blockbuster fare, and what is standard can easily become rote, particularly during what was generally a lackluster summer. And yet, both of these movies cause audiences from a variety of backgrounds to sit up and take notice.

Watching the Amazons descend on the beach in Wonder Woman is something to behold. They are collaborative, yes, and that ultimately helps Diana, Steve, and their scruffy crew save the village back in Europe. However, this isn’t collaboration based merely on the tired trope that women like working together, but rather a strategic combat decision designed to turn a weakness into a competitive advantage. The Amazons are not limited by muscle mass or stature, because by design, they multiply each other’s efforts as needed. But they also use their individual bodies in a way that I have never seen portrayed on screen before. Backbends feature heavily, as they twist to avoid danger or for a better vantage point to take aim and let loose their arrows. The Amazons slide, jump, and spin in mid-air, using their agility and flexibility to their advantage, making their combat look like it was inspired by acrobatics or ballet.

In Atomic Blonde, Lorraine, much like the actor who portrays her, is a formidable fighter, but one with far more realistic restrictions than most other action heroes. As the audience, we feel the effort she puts in to the longest fight scene, which appears to be one unbroken take. She works every advantage she has, using the walls, furniture, and objects she finds, in addition to the many and varied weapons she keeps on her person. She even uses keys between her knuckles, an anti-rape technique so pervasively taught it might as well be part of our second X chromosome. That detail surely earned a nod of recognition from every woman who watched it, but likely passed over the heads of many men in the audience. In both movies, the actors themselves are beyond athletic, and the story behind their training and stunts is at least as interesting as the movie itself.

Both of these films feature types of women that Hollywood often leaves out: queer women and women over 40. The most powerful, influential women in Diana’s life have visible wrinkles and sinewy muscles. Meanwhile, Lorraine headlines a film that gives her agency, a complicated back story, a love interest, and nudity (both sex scenes and straightforward scenes of her treating her own wounds) of the kind usually reserved for men. The queer storyline in Wonder Woman is unfortunately only implied: Antiope and the woman by her side are clearly more than just war buddies, but it would have been more powerful to see or hear a direct acknowledgement of that, especially given the queer roots of Wondy as a character. Atomic Blonde, on the other hand, has an explicit queer relationship for its bisexual lead. While not everyone is please with the representation, counteracting bi erasure in media is important, as is portraying more queer woman.

Finally, both of these movies plays with the tropes of their genres in a way that the male vehicles typically don’t. Wonder Woman fully gender-swapped the leads, deriving comedy out of casting Steve Trevor in the role typically reserved for a woman. As both a character and a movie, Wonder Woman also tackled war and violence, and came to the conclusion that there is a better way. This is a tough needle to thread for a movie kicking off a franchise (and part of an extended universe) predicated on the necessity of giant fight scenes and battles, but it’s the kind of bold move that only a trailblazing movie like Wonder Woman would make.

Atomic Blonde, on the other hand, zigs and zags between the kind of movie it wants to be: slick piece of action-filled nostalgia, nihilist take on the intelligence industry, and enough reveals to make your head spin. While the Jason Bourne franchise was refreshing for how thoughtful it was, it was only ever one thing. Atomic Blonde isn’t always successful, but it makes big swings and is certainly more than you bargained for, based on the trailer or “summer blockbuster” moniker alone.

For those who don’t believe in representation purely for its own sake, these two movies (and others like them — Theron’s own Mad Max: Fury Road comes to mind) bring so much to the table that their male counterparts don’t. They have to overcome the audience’s expectations as well as their own physical limitations, even if they are demi-gods or highly trained killing machines. Here’s hoping that after their success, studios will greenlight projects and allow writers, directors, and actors to keep pushing the limits and finding new stories to tell.

Delia Harrington lives in Boston, wears whatever shoes she pleases.