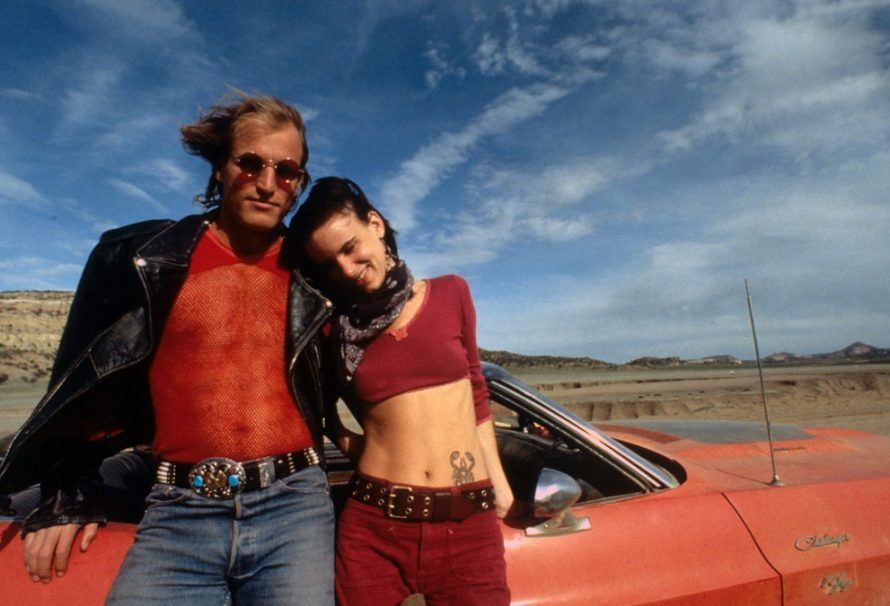 There is no image that sums up American cinema of the 1990s better than two lovers together in a car, hightailing it down a blacktop highway through an empty desert wasteland.

Any number of films from those years contain just such a scene, thanks to the explosion in popularity of lovers-on-the-run narratives, which ran the gamut in terms of scope, budget, audience appeal and quality, and attracted several of the most exciting filmmakers–established and up-and-coming–of the era. And while the overexposure of the genre definitely led to it stalling out by decade’s end, taken as a whole, these films managed to capture and convey the apocalyptic tenor of their times better than just about any others, while giving us a glimpse into the future that awaited America.

The road movie—and in particular, the fugitive road movie—and in particular-particular, the fugitive couple’s road movie—has been a staple of cinema since the very beginning. Indeed, few subgenres proved themselves as malleable to each new generation, from depression-era screwball comedies (It Happened One Night, Love on the Run), to post-war noirs (High Sierra, Raw Deal, They Live By Night, Gun Crazy), and especially during the American New Wave, which kicked off with two movies about outlaw soulmates, the eponymous couple in Bonnie & Clyde and the platonic biker buddies of Easy Rider, and produced a plethora of similar stories (Pretty Poison, The Honeymoon Killers, Boxcar Bertha, Badlands, Thieves Like Us, Wanda).

(Nor was the genre confined to America’s shores: some of the earliest lovers-on-the-run movies came out of the silent cinema of Scandinavia [The Robber’s Sweetheart, The Outlaw and His Wife] and they proved particularly popular during the French New Wave [Shoot the Piano Player, Breathless, Elevator to the Gallows, Pierrot le Fou].)

While there are a handful of examples from the 1980s (the dark comedies Something Wild and Raising Arizona spring to mind), it was during the 90s that filmmakers went furthest in exploring how these stories could be used to express the anxieties not only of their day, but of the future. When one half of the mass-murdering lovebirds in Natural Born Killers dreamily intones, “Whole world’s coming to an end,” he seems to be speaking on behalf of Generation X. Given that this was a generation of latchkey kids raised on pop culture, it tracks they would attempt to reckon with this sense of encroaching armageddon by way of a familiar mythos built around the American belief in westward expansion.

This is readily apparent in the neo-noir and hard-boiled resurgence of the decade, which began in earnest its very first year (or the very last year of the previous decade, if you want to be a stickler) and which swapped out the shadowy, urban anxiety of classic film noir for the desolate, sunbaked menace of film soleil. This style perfectly lent itself to stories of lovers on the run, in that it could convey the same fatalism found in traditional noir, but could also easily bear the more optimistic ethos of odyssey narratives.

The broad range of tone is evident in the romantic road-crime films of 1990, which include the doom-laden After Dark, My Sweet, one of three Jim Thompson adaptations released that year (a second version of the author’s seminal lovers-on-the-run novel, The Getaway, came four years later, and has been recognized as the first neo-noir remake of a neo-noir); Greg Araki’s radical gay spin on the genre, The Living End, which exists in a state of existential limbo; and David Lynch’s Wild at Heart, which concludes with an unabashedly literal fairy-tale ending.

Aside from Terence Malik’s poetic, philosophically inclined Badlands (1973), no film had as big an influence on this latest iteration of the genre as Wild at Heart. Lynch’s adaptation of co-screenwriter Barry Gifford’s 1989 novel of the same name, which stars Nicolas Cage and Laura Dern as a free-spirited couple running from her psychotic mother and a cabal of deranged criminals, set the tone for most of the films that followed, especially in its depiction of America as a grotesque, ultraviolent and terrifying no-man’s-land, one in which a host of dark forces seek to snuff out anyone who dares hold on to, in the words of Cage’s snake-skinned Romeo, a sense of “individuality and belief in personal freedom.”

While Lynch’s brand of surrealism à la Americana may not have enticed mainstream audiences, they too were hungry for stories about rebels shirking off the shackles of modernity and striking out West, as evidenced by the huge success of Ridley Scott’s Thelma & Louise the very next year. A story of platonic love between two heterosexual women (although the film certainly bears, and even invites, a queer reading) sticking it to the man–and men, in general–this slick blockbuster is probably most responsible for the glut of fugitive road movies that followed, although the zeitgeist-capturing fervor caused by two Quentin Tarantino-penned films that followed it certainly added to their prevalence.

The one-two punch of True Romance (1993) and Natural Born Killers (1994)—the former, directed by Tony Scott; the second by Oliver Stone—embraced a heavy MTV aesthetic (nonlinear edits, bright colors, frenetic camerawork, warped filters, wall-to-wall music) in order to speak directly to Gen X audiences. This makes both of them very much movies of their time, in ways both good and bad. Of the two, True Romance holds up far better, since Scott is concerned, first and foremost, with telling an interesting story, whereas Stone wants to shock the viewer into opening their third eye. This makes NBK a mostly grating experience, even if its formal daring remains highly admirable. For all of the hysteria and pearl-clutching that attended its massively controversial release, it often plays as laughably hollow 27 years on.

Not all the blame for this lies with Stone, as much of what remains from Tarantino’s original script reeks of juvenile wish fulfilment. To a lesser extent, this is true of True Romance, as well as any number of other lovers-on-the-run movies from the around same time (see also: the fun but rote Love and a .45 or the occasionally intriguing, mostly turgid Kalifornia), which eagerly indulge in a violent and horned up masculine fantasy of love and freedom. This would be totally fine, if only they didn’t also regularly betray hollow pretensions of profundity that, in hindsight, contain all the insight of nu metal song lyrics.

This is not to say all of lovers-on-the-run movies from the era fall prey to the same cliches. Far from it: Greg Araki used the genre, first in his blisteringly transgressive The Living End and four years later in the phantasmagoric, intentionally campy, The Doom Generation (1994), to attack the cruel hypocrisy of straight America in the aftermath of the AIDS epidemic; while Carl Franklin refitted it in 1992 to tell a devastating tale of racial strife, sexual abuse, police corruption, and personal redemption in his masterful One False Move, arguably the best crime drama of the entire decade. (Released a week after the Rodney King riots devastated Los Angeles, it’s no wonder the critically heralded film was utterly ignored by audiences.)

In 1997, the same year that Lynch and Gifford re-teamed for Lost Highway—which utterly dismantles the romantic ideal of young heartthrobs on the run by revealing it as the schizophrenic fantasy of an impotent, middle-aged wife killer—Spanish director Alex de la Iglesia adapted another Gifford novel for Perdita Durango (originally released Dance with the Devil), a hilariously nightmarish odyssey across the Southwest border from the perspective of two Mexicans outlaws. Grimy, gruesome and perverse, it’s hard to imagine a movie so boldly mean-spirited and proudly transgressive being made today (even if it’s exactly the movie Rob Zombie has been trying to make his entire career).

The genre wasn’t the sole province of men, either. Although the feminist bonafides of Thelma & Louise have been debated since the film came out, a number of other films centered around the female halves of their fugitive duo were actually made by women, including the Drew Barrymore vehicles Guncrazy (1992) and Mad Love (1995), directed by the equally underrated Tamara Davis and Antonia Bird, respectively, as well as Kelly Reichardt’s spare, spooky debut, Rivers of Grass (the first of several road movies she’d go on to make, including a couple that could liberally qualify as ‘lovers-on-the-run’). Moving over a continent, the very end of decade saw two French directors, Virginie Despentes and Coralie Trinh Thi, take the feminist fugitive road narrative to to its ultimate, literal extreme with their notorious feature, Baise-Moi.

Taken together, these films transcend the politics of identity to form a disturbingly singular vision of life at the end of the American Century—an epoch that some at the time declared the End of History. Despite the decade’s surface of peace and prosperity, this vision presented the nation as a crumbling, blasé dystopia upheld by slavish devotion to a mind-numbing, soul-crushing 9-to-5 lifestyle and addicted to tabloid violence. The movies themselves are often guilty of wanting it both ways: satirizing and/or despairing over the grotesque state of the world while indulging in the fashionable nihilism that makes it so grotesque. But neither are they unaware of this hypocrisy, recognizing that it’s all part of the same feedback loop. Ultimately, it’s all meaningless anyway, since there is a very real sense throughout them that the world is coming to an end. In light of this, the only thing for anyone to hold onto is, well, love.

Given that the world as we knew it pretty much did come to an end as soon as we were on the other side of the millennium, it makes sense that we’ve had so few lovers-on-the-run movies in the intervening years (with a few obvious and notable exceptions). The surreality of real life has caught up to and even eclipsed these movies, and thanks to the rapid technological expansion of the surveillance state and social media, you can no longer even indulge in the fantasy of high-speed flight. The open road offers no refuge in the age of GPS.

But hey, at least we still have love to hold on to.

The Other Side of Sirk

The Last Word: The Feminine Perspective of The Last Duel