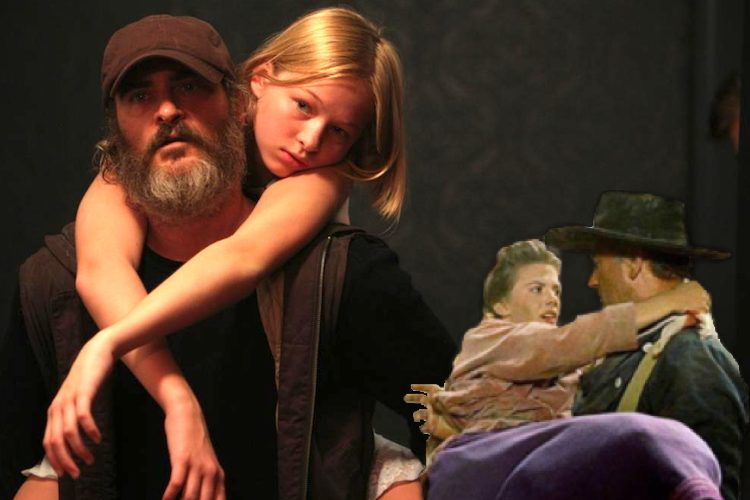 From The Searchers to You Were Never Really Here, the “captivity narrative” is one of America’s strongest tropes

When Lynne Ramsay’s You Were Never Really Here (now available on DVD/VOD) came out this past spring, it was hailed as a modern update of Taxi Driver. Like Martin Scorsese’s similarly artful — and similarly brutal — meditation on paranoia, alienation, and innocence abused, You Were Never Really Here centers around the violent odyssey of a PTSD-riddled war-vet-turned-vigilante, who descends into the hellish underworld of New York City in order to liberate a teenage girl from the flesh trade.

Yet, for as great a debt as Ramsay’s film owes to Scorsese’s early masterpiece, its roots reach much further back than that single movie, to a tradition that pre-dates the entire medium film: the Captivity Narrative.

Though examples can be found across centuries and continents, classic American captivity narratives are generally defined as stories that are “ideologically charged in relating the ordeal of a colonial Euro-American woman who is taken captive by mercilessly predatory Indian ‘savages’ assailing the virtuous frontier family.”

While many of the examples found throughout early American literature were at least partly based on true accounts, the majority were sensationalized fictions spread with the express purpose of propagating fear and hatred of indigenous peoples. These narratives proved useful past the decimation of Native American society, and for as problematic (to put it mildly) as they are now recognized to be, they remain ever-present in our fictions, including cinema. As they’ve evolved, their perspectives have shifted, so that the majority tend not to focus on the abducted woman but on the Great White Avenger who takes up her rescue.

Captivity narratives have proven exceptionally malleable, fitting easily onto a variety of genres, settings, and time periods. In their sincerity of anger and fear on behalf of the white working class, these films found easy scapegoats for socioeconomic tumult and demographic change in the form of one-dimensional predators — generally portrayed as multi-ethnic gangbangers, muggers, dope pushers, and rapists — villains who, like the dreaded Native tribes before them, can easily be labelled subhuman and violently expunged. Viewed this way, it’s no surprise that the Death Wish films, including this year’s Bruce Willis-centered remake, have served as rallying points for conservative audiences.

Interestingly, the most classic example of the captivity narrative in American film history is itself one of the ultimate deconstructions of it. John Ford’s The Searchers (1956) traces the years-long journey of fearsome Civil War veteran Ethan Edwards (John Wayne, giving his greatest performance) hunting down the Comanche tribe that slaughtered his brother’s family and absconded with his niece. It becomes clear early on that Wayne’s avenger — already shown to be a vicious racist and mercenary criminal — intends not to rescue his niece but to kill her and put an end to what he perceives as the ultimate dishonor: her rape at the hands of the Comanche.

The most renowned of the second wave of American Westerns, in which deconstruction (if not yet full-on revisionism) ruled the day, The Searchers may not do much to counteract the dehumanizing of indigenous peoples in captivity narratives, but it certainly humanizes its central Great White Avenger, stripping him of his moral birthright and nobility. In his interrogation of the captivity narrative, Ford finds that there is no longer place for such a figure in the modern world, and that society would do well to shut him out.

But despite the lasting popularity of Ford’s film, the Ethan Edwardses of America did not go away, nor did captivity narratives. Twenty years later, screenwriter Paul Schrader delved deeper into the genre in his script for Taxi Driver. (Two other Schrader scripts written during the same period — Rolling Thunder and Hardcore — would further mine this thematic territory.)

Thanks to Scorsese’s brilliant direction, Taxi Driver (1976) would become the quintessential portrayal of American alienation of its era. Its Great White Avenger, Travis Bickle (Robert DeNiro) is portrayed as an American golem created from the collective muck of historical atrocity: racism, misogyny, imperialist guilt, economic despair. Taxi Driver goes even further than The Searchers in its subversion of the captivity narrative: The captured girl at the center of the story doesn’t even want to be saved; Bickle, unlike Ethan Edwards, ultimately gives into his bloodlust; and in the end, rather than being turned away from society, he is celebrated as a public hero. The ironic power of its ending — in these times of MRAs, white nationalism, war fatigue, mass shootings, and mental health crises — feels more prescient than ever.

The Searchers and Taxi Driver may stand as the ultimate deconstructions (and rejections) of the American captivity narrative, but many other films in between them and since — including Straw Dogs, Deliverance, The Texas Chainsaw Massacre, Streets of Fire, Room — found interesting ways to use the template to explore a range of deeply felt subject matter, including gender dynamics, Manifest Destiny, imperialism, war, white guilt, mythology, and more.

It is so disappointing that, in recent years, American movies have reverted back to the easy, thoughtless tropes that came to define captivity narratives at their most noxious.

The Taken films stand as the most obvious examples of this reversion, with their depiction of the Great White Avenger freeing the embodiment of besieged white female virtue from the throes of white slavery, free of any sense of nuance, self-awareness, or irony. Over the last couple of years, an abundance of similarly rote, empty-headed films have taken the same tack, to one degree or another, including The Equalizer, Logan, Death Wish, and most recently, Sicario 2: Day of the Soldado.

Even when these films focus on non-white leads and present the danger at the center of their conflicts as non-sexual in nature, their concerns are no different: They want their audiences to root for the lone avenger to protect vulnerable female virtue against the sinister forces of foreign hostility, here represented in the form of European and Latin American criminal syndicates. It would be one thing if these new examples at least contained the transgressive shock value or visceral thrills of their exploitation predecessors, but they don’t even attempt that, instead settling for by-the-numbers set pieces and adopting pretensions of unearned profundity.

This recent devolution is one of the reasons that You Were Never Really Here feels so fresh. Ramsay’s film (adapted from the 2013 novel by Jonathan Ames) doesn’t find a new story to tell (in fact, its individual arcs and beats recall David Mamet’s 2004 Spartan to an almost suspicious degree), nor does it do much to subvert the tropes of captivity narratives. True, it does make the savage Other a group of rich white men this time around, but that feels less radical than perhaps it should, given the disdain for political elites that exists across the ideological spectrum.

No, what makes You Were Never Really Here unique is the way its elliptical style disregards the notion of traditional narrative in the first place, choosing instead to focus on its aesthetic qualities — cinematography, the score, editing, central performance — to such an overwhelming degree that it forces us into the unsteady mindset of its vulnerable protagonist (Joaquin Phoenix playing the Great White Avenger as an utter shell of a person, stuck in a loop  of traumatic flash points). Cliche as the term has become, You Were Never Really Here is a cinematic “tone poem,” one that uses its individual stanzas to isolate the tropes and cliches of its malevolent narrative, thereby finding new pockets of aesthetic beauty within its innate ugliness.

It’s fitting that a filmmaker from outside America should be the one to present us with a new perspective on a story we’ve been telling one another since our national inception.