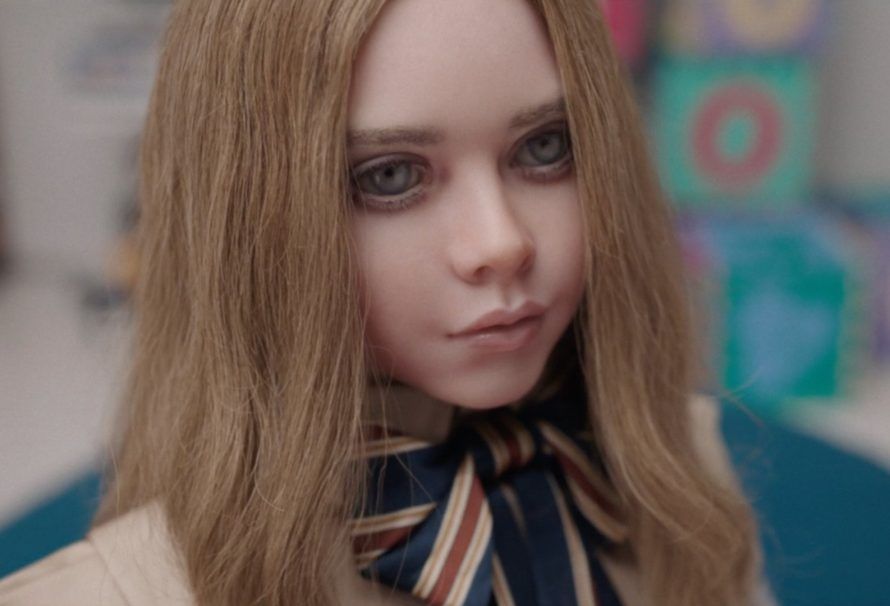 From the moment the Internet met M3GAN, the eerily lifelike AI doll from the film of the same name, she was instantly associated with music and dance thanks to a meme-ready sequence from the trailer. But believe it or not, this is not even the wackiest musical moment M3GAN has to offer. This may already be known to you from Letterboxd reviews or errant tweets, but if you’d rather experience this bizarre scene fresh, leave this tab open and don’t read the SPOILERS below the gif.

For those who do know the film, it will likely come as no surprise that this left-field musical moment is M3GAN’s rendition of Sia’s “Titanium.” She softly intones this pop anthem to calm Cady, the child she’s been programmed to befriend and protect, after the doll hilariously and horrifyingly intervenes to confront her teenage bully. M3GAN slays — literally and literally.

The song opens a release valve of uproarious laughter while also tightening the fear that no outcome is off the table with her AI gone awry. It’s a brilliant moment not only because of its unexpected timing. “Titanium” is not an arbitrary selection to amplify the “WTF” factor, but entirely in keeping with the film’s overall commentary.

M3GAN director Gerard Johnstone and screenwriter Akela Cooper pinpoint multiple instances in which our society has reached the parodic stage of various intertwined 21st century trends. Sia’s paradigmatic song of 2010s girl-pop dovetails with the era’s burgeoning technological trends of automating our way out of any social problem, both of which represented an optimism that has since dissipated into disillusionment. The “Titanium” scene provides the skeleton key to the whole movie — as well as the wider context in which it resides.

M3GAN marks the natural endpoint of an entire genre cycle. This musical moment clarifies the outline of a cultural vibe shift that reveals itself simply by tracing the evolution of how movies deploy Sia’s music. M3GAN’s breathy rendition of the artist’s signature tune harkens back to an era’s faith in unending social progress through art and algorithms while portending its ultimate doom.

Almost immediately after the debut of the track, a dance pop tribute to inner strength made in collaboration with David Guetta, “Titanium” appeared in a pivotal scene of 2012’s Pitch Perfect. The song functions as a bonding agent between Anna Kendrick’s Beca, a new college student reluctant to join an a capella group, and Brittany Snow’s eager recruiter Chloe. The two characters harmonize in multiple senses by singing the tune in the shower. At this primitive stage of poptimism, the potential feels endless – what boundaries can’t be eradicated through the combination of a catchy beat and fortifying lyrics?

Just two years later in 2014’s Wild Tales, “Titanium” already functioned as shorthand for bubbly celebration. The song introduces the final segment of this Argentine anthology film, which unfolds at a wedding soon to go off the rails. While perhaps the seeds of the couple’s (and the genre’s) demise are evident, they’re untraceable when Sia’s song blares from the speakers. The jubilant mood of the song and the crowd as the newlyweds enter embodies the classical stage of poptimism. The guests don’t even have to speak the language to connect to its energy.

The climate changed by mid-decade as reactionary forces mobilized to reclaim power. Suddenly, these bubbly pop songs felt out of sync with a souring international mood. While others swap upstream against the cultural current, Sia stood out for her willingness to interrogate the foundations of pop itself. The original music she penned for Brady Corbet’s 2018 Vox Lux saw the genre’s past, present, and future — all the beauty and the banality.

The wide array of songs she wrote for fictional pop sensation Celeste represent a revisionist stage for pop. Corbet’s film reimagines the exuberant basis upon which “Titanium” became a sensation. Sia’s music for the film comes from a place of pain that acknowledges the 21st century’s undeniably violent streak, be it domestic school shootings or international terrorism.

“I don’t want them to think too hard,” confesses Raffey Cassidy’s younger version of the character about her music, “I just want them to feel good.” The power of Sia’s music in this alternate reflection of reality derives not from ignoring the pain of contemporary life but defiantly — perhaps delusionally — choosing joy in its wake. It’s a response to tragedy, not an escape from it.

But by the time Natalie Portman’s embittered adult Celeste steps on stage to belt out Sia’s infectious tunes in Vox Lux, pop music lands in the same cultural context of hollow triumphalism. The sadness of her spectacle becomes all the more dispiriting by observing how much Celeste has sold out her ideals.

And in 2023, a decade and change of the world Sia’s “Titanium” hath wrought culminates with the AI-powered vocal chords of M3GAN turning the song into both lullaby and laugh line. The musical moment is humorous in large part because it’s bonkers, yes. But the film is also using that absurdity to reveal what’s been there in the song all along.

The campy, chilling moment where bubble-gum pop occupies the same space as a nursery rhyme allows for a real reckoning with just how much people bought into poptimism altogether. M3GAN demonstrates how easily the empowering words of “Titanium” can ring empty because their promises are just superficial sloganeering. Anything so easily co-opted for nefarious ends is entirely at odds with the fizzy dream of perpetual progress and thus plum for parody.

In M3GAN’s America, glossy girlpop belongs in the same cultural wastebin as tech idealism. (“12 months ago, I was Person of the Year,” lamented the chief twit on the week of the film’s release, in case the latter death spiral is in doubt.) Both attitudes rose to prominence on a wave of good feeling and naive hope that trends toward equality and justice would continue unabated and unaided. The joke’s on us for ever believing in these false pop prophets offering easy ideologies to navigate a collapsing world.

Yet while the parodic stage of any genre cycle might seem like fertile ground for further cynicism, the next iteration of these forces are likely brewing somewhere to begin the process anew. Shoot poptimism down, but it will get back up.