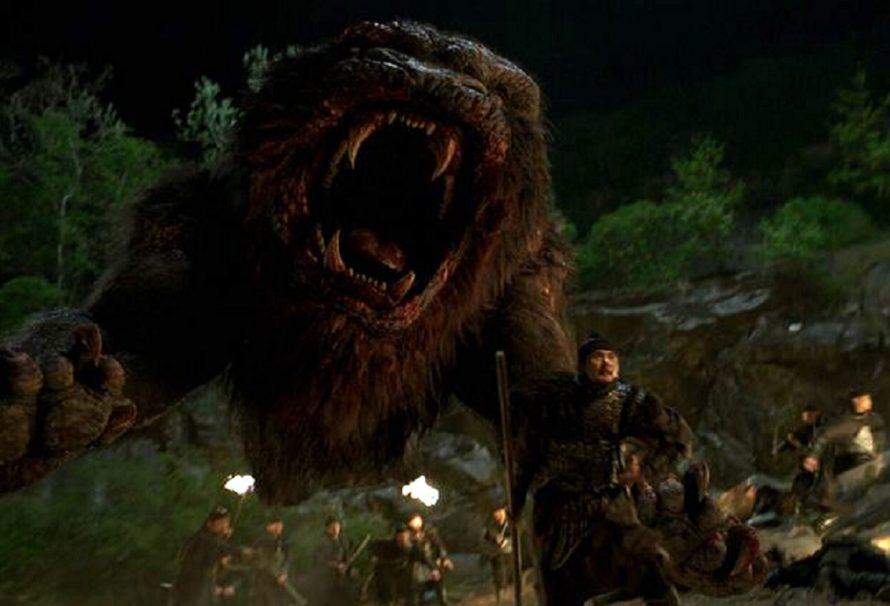 Monstrum blends history and large-scale monster violence, using the creature as a catalyst for a story of political upheaval and intrigue. Years after an outbreak of plague was used by King Jungjong’s corrupt officials as an excuse to execute subjects loyal to the previous ruler, disease has resurfaced, along with a strange disappearance of most of the area’s wildlife. Rumor has it that a huge monster in the mountains is responsible for both, but Jungjong (Park Hee-soon) is dubious. He calls on a former army captain, Yoon Gyeom (Kim Myung-Min) to investigate, and sends an official, Heo (Parasite’s Choi Woo-sik) to accompany him.

Yoon Gyeom brings along his daughter, Myung (Hyeri Lee) and comrade Sung Han (Kim In-kwon) to help. The group quickly discovers the monster–whose name really is Sparkles, for somewhat tragic reasons revealed later–is no myth. To get rid of the threat, however, they’ll first have to defeat a power-hungry prime minister (Lee Kyeong-yeong) and his homicidal right-hand man (Park Sung-woong).

There’s always a feeling in creature features that even though it’d be more natural to side with the victimized humans, we’re a little more inclined to root for the monster. Monstrum takes this to another level by characterizing its disease-spreading, befanged destructor as a relatively innocent victim of selfish human power struggles. Once part of the previous king’s menagerie, Sparkles is released into the sewers when Jungjong takes the throne, where he eventually mutates from cute lap critter to giant monster. His violence against mankind is based in a fully justifiable sense of fear and anger.

Sparkles’ predicament mirrors that of the Korean people, who throughout the film are subject to the whims of the monarchy, and are often victims of it as well. The film’s rural villagers find themselves drafted into service, or losing their loved ones and homes, simply because they’re poor. Monstrum has action and creature violence, but it also manages to include thoughtful class commentary that’s as applicable right now as it is in the world of the film (the inclusion of disease as a factor here is definitely unintentional, but it still adds an extra layer of timeliness).

As a monster movie, Monstrum could stand to include a lot more creature mayhem than it does. The film spends a lot of time with court politics that, while adding an interesting perspective to the proceedings, take away from the reason most viewers want to watch Monstrum in the first place. However, there’s still fun to be had here, and if you’re willing to dig a little, there’s a welcome intelligence on display alongside the destruction. Monstrum is a unique entry in its genre, one worth paying attention to.