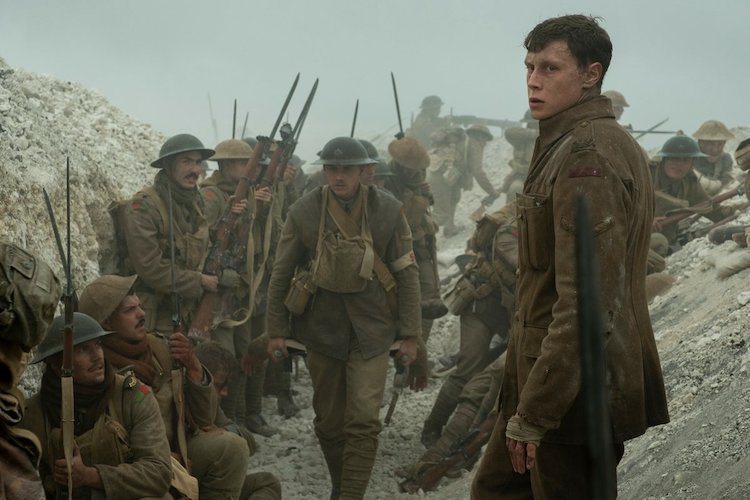 If cinema is, as Roger Ebert famously put it, a machine that generates empathy, the camera is its motor. What a director, editor, and cinematographer choose to show an audience, and the way they choose to frame it, communicates volumes about a movie’s themes and the filmmakers’ position on them.

Sam Mendes’ WWI drama 1917 is aimed at helping audiences understand the physical and emotional sacrifice of the millions of young men who fought and died in the “war to end all wars.” It does this by following a pair of soldiers (Dean-Charles Chapman and George MacKay) on a mission to deliver an important message, told entirely through long shots, edited together to look like a single take. The end result occasionally falters, but is mostly an intense, emotionally resonant and impressive achievement.

The story is simple, but fraught with peril. Two young army privates, Blake (Chapman) and Schofield (MacKay) are tasked by their superiors with delivering a vital message to a battalion in which Blake’s brother (Richard Madden) serves. The battalion’s commander, Colonel MacKenzie (Benedict Cumberbatch) is a day away from an attack on German troops, but is about to lead his men into a deadly trap. To save the lives of hundreds of fellow soldiers, Blake and Schofield must deliver stopping orders to MacKenzie, which means crossing no-man’s land and numerous battle lines, without being captured or killed by the Germans.

1917 is as much a cinematographer and editor’s movie as it is a director’s. Mendes works closely with the legendary Roger Deakins, and wisely borrows Dunkirk editor Lee Smith, to build and keep a perspective that moves with his heroes throughout the movie. 1917 contains plenty of emotional moments, but its most affecting element is its landscapes, and the way they subtly shift from pastoral fields to crowded trenches to hellish grey wastelands piled with bodies. Deakins’ long shots, and Smith’s ability to seamlessly stitch them together, makes those landscape changes gradual, the way they would be in real life.

In moments of conflict, this approach also ramps up the tension, as with an extended nighttime sequence that follows Schofield through the ruins of a village, lit by the flames of distant battle. As Schofield attempts to avoid sniper fire, Deakins makes use of the heightened, frequently shifting light and shadows, resulting in a disorienting but beautiful long shot. Our eyes, like Schofield’s, are frequently scanning the perimeter.

That extended God’s-eye perspective does have its occasional drawbacks, however. There are several moments — particularly in dialogue and action — where Mendes’ film takes on a video game quality, as if the audience were wearing a VR rig or playing a first-person shooter. The times this happens are fairly obvious, and they threaten to ruin the illusion, but only momentarily. It certainly helps that the whole enterprise is undergirded by a fantastic score from Thomas Newman — some of his best work in years — that captures the film’s purgatorial gloom and sorrow, as well as the protagonists’ upward struggle.

By spending the entire runtime of 1917 with Blake and Schofield, we’re allowed to feel the enormity of the task in front of them, the obstacles stacked against them, and the emotional weight of their mission. Chapman and MacKay both have very open, youthful faces, and Mendes shows the effects of their experiences slowly playing out over their faces in different ways — MacKay’s, in particular, gradually softens and gives way to ever-growing amounts of weariness and grief. Because the camera spends so much time at the characters’ sides, we see this happen almost in real time, and the feeling is something like opening a window directly into their souls. Even though we’re told little about Blake and Schofield’s lives outside the war, by the end of the film, it’s as if we know them intimately.

It might be tempting for some to think of 1917 as a showy technical experiment, but the movie’s ambitious vision is there for a reason. It’s meant to communicate the toll of war on those who fight, and particularly to invite more mainstream consideration of a war that, from an American perspective at least, often gets less attention in popular culture. Mendes, Deakins and Smith’s visual experimentation hits a couple of hurdles, but for the most part, it helps achieve that vision beautifully.

Review: Feast of the Seven Fishes

Classic Corner: Season of the Witch

The Complicated Legacy of Dances with Wolves