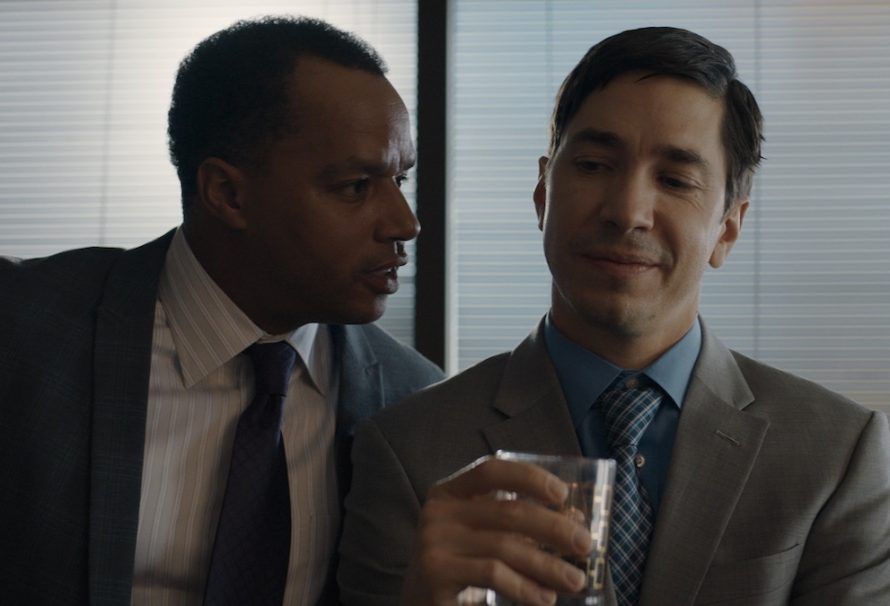 The opening scene of Gille Klabin’s The Wave promises an edgy head-trip of a movie, as main character Frank (Justin Long) describes a drug that’s meant to simulate what happens in the brain in the moments just before death, and how taking this drug in an experimental trial had a profound effect on one of his college friends. As the camera swoops around a house strewn with the aftermath of a raging party and provides glimpses into strange visions, Frank muses on the meaning of life and the status of his lost wallet. It sounds like a stoner classic in the making.

Instead of a kaleidoscopic journey into the mind or even a silly comedy about getting too high and waking up in a strange place, though, The Wave turns out to be more like a moralizing After School Special, taking Frank, a corporate attorney whose job involves finding ways to deny insurance claims, on a sort of Ebenezer Scrooge journey toward being a better person. It’s the worst kind of hand-wringing lecture, one that presents itself as cool and daring before springing its heavy-handed message on the audience.

Once the plot is set in motion, it’s remarkably similar to A Christmas Carol, with the family of a dead firefighter (whose life insurance policy Frank has managed to invalidate) standing in for the Cratchits. Frank’s bro-tastic work buddy Jeff (Donald Faison) convinces him to go out for mid-week drinks to celebrate his breakthrough on the case, and they follow a pair of attractive women from a bar to a mysterious house party. Theresa (Sheila Vand) is like Frank’s Ghosts of Christmas Past, Present and Future all in one, interrogating him about his life choices and pressing him to shake off his corporate-drone bottom-line mentality. Lured by her charms, Frank agrees to take some sort of unidentified hallucinogen, after which he promptly blacks out.

He wakes up the next day missing his wallet, in an empty house whose owners apparently had no idea there was a party being thrown there. Attempting to piece together what happened to him, locate Theresa (who’s gone missing), and still give a big presentation at work, Frank finds himself slipping back and forth in time, and Klabin and screenwriter Carl W. Lucas come up with a few clever connections between past and present, as Frank puts events into motion after they occur, and then experiences the effects before he even knows what the causes are supposed to be. The middle of the movie sets up a Philip K. Dick-style world of shifting realities, albeit populated by obnoxious, annoying characters.

It turns out that none of that stuff is relevant, though, since the final twist renders most of the plot completely superfluous, including Frank’s increasing connection to Theresa, who’s little more than a drug-induced plot device (although at least Vand has some alluring charm). All of Frank’s shifts through time serve to set up the equivalent of a drunk-driving public service announcement, sacrificing sci-fi and metaphysics for humorless scolding about corporate greed.

It’s not amusing or visually inventive enough to make up for the clumsy, didactic ending, and Long, who’d fit perfectly in a dumb drug comedy, doesn’t bring the depth to make Frank into a figure of sympathy or even pity. He’s just another stoned idiot who thinks he figured out the secrets of the universe, and is determined to tell everyone about it, whether they want to listen or not.

Review: Being the Ricardos