How could anyone even suggest making a sequel to The Fly? David Cronenberg’s 1986 sci-fi/horror remake of the 1958 classic is a stone-cold masterpiece. It’s arguably the greatest horror film of the ‘80s and the director’s personal best cinematic offering. When The Fly II hit theaters on Feb. 10, 1989, it was doomed to disappear in the shadow of its predecessor. No movie could live up to the expectations that Cronenberg’s unbelievable triumph had created.

And that’s so incredibly unfair.

Director Chris Walas — who had won an Academy Award for his special effects work on the previous film — looked at The Fly II as an old-fashioned creature feature. The operatic approach that Cronenberg had used wasn’t what Walas sought with the sequel. While he still wanted to deliver a thoughtful and effective story, he also wanted to embrace the more classical elements of the 1958 version. As he plainly states in the documentary Transformations: Looking Back at ‘The Fly II’: “[The Fly II] is a monster movie.”

The story starts with a worthy bit of follow-up from The Fly: Veronica Quaife (Saffron Henderson, replacing Geena Davis) is giving birth to Seth Brundle’s (Jeff Goldblum) baby. The company that was funding Brundle’s experiments with the telepods, Bartok Industries, sees the baby as their property and decides to keep him locked up in their facilities. It’s revealed that the baby, Martin (played by Eric Stoltz), has an accelerated life span due to the genetic mutations he inherited from his father, in addition to being genius-level intelligent and unstoppably curious. Of course, this leads him to discover his father’s teleportation project. However, Martin wants to see if he can use the telepods to remove the aberrant DNA in his body to stop himself from growing up so fast. Naturally, some goopy metamorphosis occurs and we’ve got ourselves a B-movie beast. 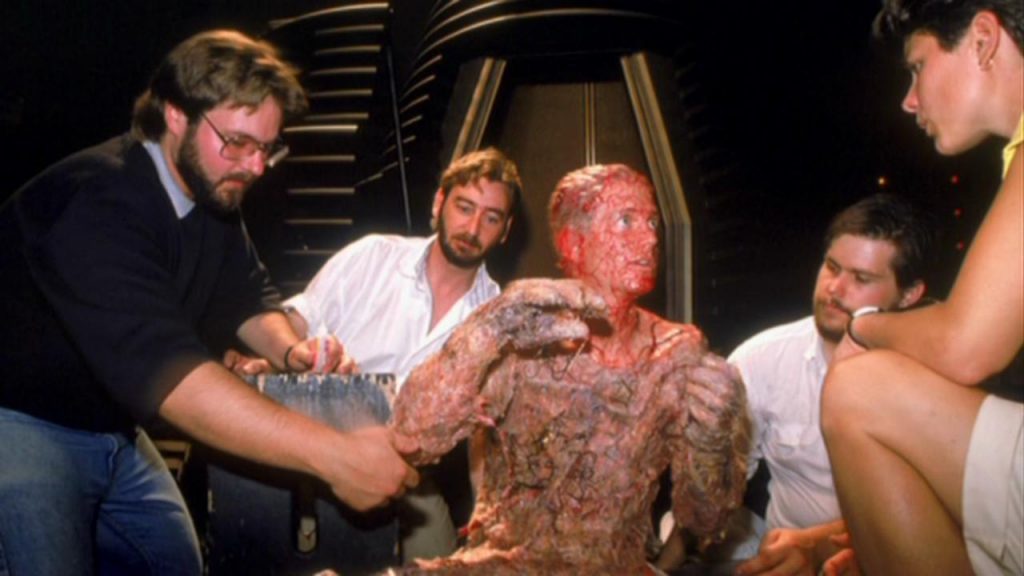 What works about The Fly II from a story perspective is that it’s not trying to imitate The Fly. This isn’t a case of sequelitis where you get the same movie in a new package. Is it less complex than The Fly? Absolutely, but that’s not an inherently bad thing. It’s a matter of judging whether The Fly II succeeds in its attempts at simplicity. And for the most part, it does.

Instead of The Fly’s triumvirate of morally shifting lead characters, The Fly II creates definitive protagonists and antagonists. Martin’s father figure, Anton Bartok (Lee Richardson in a pitch-perfect performance), is an outright bad guy who gets his comeuppance in the end. Martin is completely sympathetic, even when he devolves into a gloppy freakshow. His rampage at the end of the film carries a heroic overtone.

Speaking of Martinfly, it’s amazing that film fanatics have mostly ignored The Fly II’s delightfully gruesome effects. Walas’s company returned and were given a clean slate in terms of design. In truth, the icky approach in this film is closer to Walas’s work in Gremlins than The Fly; lots of unnatural greens and vibrant reds make up the palette of Martin’s transformation. The design of Martinfly is used to great effect in a number of shots where he leaps into a room or stomps down a hallway. And the unabashed gore in The Fly II is masterful. There is a face-melt in this that is an utter joy, and a head crush that might be one of the best in cinema history. As far as base pleasures are concerned, The Fly II is victorious.

But it’s not only an accomplishment in a Fangoria cover sort of way. The Fly II works as a streamlined story. The script is credited to a number of writers — genre stalwarts like Mick Garris, Frank Darabont, and Jim & Ken Wheat — and it’s impressive that the movie is such a smooth narrative. The perspective rarely departs from Martin, and Stoltz imbues him with a bright naiveté that keeps him appropriately childlike. The script even gives Martin a beloved dog (one of Bartok’s laboratory test subjects) that becomes deformed by the telepods. When Martin discovers that the dog has been kept alive for years, he decides to kill it in order to end its suffering. It’s a scene that absolutely works, even though it’s being blatantly manipulative. The script may not be intricate, but it’s certainly working at achieving the goals it sets for itself.

The only factor that never quite clicks is one that was imposed upon Walas by the studio: a romantic connection between Martin and fellow Bartok Industries employee Beth Logan (Daphne Zuniga). It’s not Zuniga’s fault — she does exactly what’s asked of her — but it’s the one copy-and-paste item from the original movie that feels tacked on.

Otherwise, The Fly II is a perfectly enjoyable drive-in treat. The fact that it has been discarded solely because of its comparative lesserness is not acceptable. The Fly II was never going to be able to get anywhere close to the transcendent nature of its progenitor, and The Fly II knows this. It leans into its sequel status and crafts a story framework that’s just clever enough while keeping things small and intimate. It revels in the freedom to be as gross as it desires, and that’s definitely in stark contrast to the weighty horror of The Fly’s effects. And though it lacks the import a lot of horror aficionados crave from studio pictures, The Fly II is more than capable of delivering the kind of straightforward fun we often extol about horror fare from the ‘80s.

Thirty years later, The Fly II deserves the kind of love it was denied at its birth. Don’t appraise it in relation to its father. Let it be its own animal — even if that animal is a Martinfly.

Biopic of the Beast: Oliver Stone’s Nixon at 25