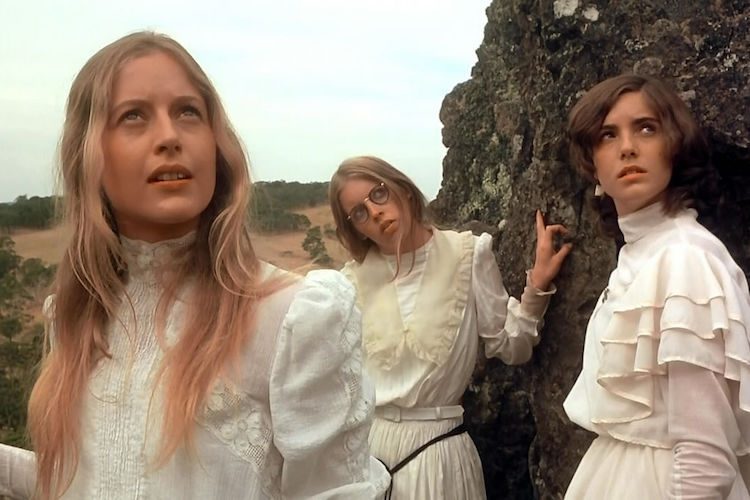 In 1975, Peter Weir’s debut film Picnic at Hanging Rock put Australia’s burgeoning art cinema squarely on the map, on its way to becoming a cult classic. Based on a novel by Joan Lindsay, the film has always had an air of “based on a true story” about it, despite its central mystery being a complete fiction: the disappearance of three Victorian schoolgirls and one teacher during a school picnic at a large geological formation known as Hanging Rock near Mount Macedon.

Part dreamy costume drama, part Victorian sexual repression, part crime procedural, part mystical coming-of-age tale, part bucolic-yet-eerie folk-horror bauble, this film’s cult status took on renewed vigor when a director’s cut appeared in 1998. Unlike most directors’ cuts, this new version did not contain additional or previously unseen footage, but actually removed scenes included in the original. Some viewers, myself included, were perplexed and gutted by the loss of these scenes, but Weir stood by his new, trimmer version that ended up being seven minutes shorter.

A new six-part television miniseries adapted from the novel is soon to debut on Amazon, and it takes some unusual liberties. The 1975 film’s action begins on the morning of Valentine’s Day 1900 and progresses forward, portraying the picnic, the disappearances, the search, and the aftermath. In the series, there is liberal movement back and forth in time, with flashbacks to the characters’ lives before they came to Hester Appleyard’s finishing school for girls.

While I found some of the expanded adaptation of the novel’s story elements to be fairly interesting, the complete shift in tone from Weir’s film is jarring and off-putting. No doubt some viewers have found the 1975 film to be slow, but the miniseries seems determined to reinvent it as a titillating thriller. I was bothered by the pseudo-feminist underpinnings as well, as they seemed like ham-fisted attempts to comment on Weir’s unapologetic male gaze, while ignoring the strong feminist vibe the film radiates (indeed one sees traces of the film in more contemporary works, like Sofia Coppola’s The Virgin Suicides, and her remake of The Beguiled, as well as Martha Marcy May Marlene, and Woodshock). Even Weir’s very adept portrayal of the mateship (a most Australian cinematic trope) between Michael and Bertie is re-imagined as a homoerotic element. The innocent romantic fixations some of the girls feel for one another are likewise amplified into naughty lesbian intrigue.

Agreed, then, that the miniseries, with its gaudy costumes, gratuitous nudity, and histrionic music is a major misstep and should probably never have happened. But if one good thing comes of it, it will be that many people will discover the film who had never seen it before.

Picnic at Hanging Rock takes on fresh relevancy amid the current discussion of folk horror, as one of the finest early examples of the genre. References to nature’s beauties and dangers are mentioned frequently: “Careful! There could be snakes!” is but one line of dialogue that not-so-subtly conjures phallic symbolism, and Weir’s mise en scene is really a masterful Freudian fever dream, awash in soft light and delicate lace. Nature, it seems to be saying, is the only finishing school young ladies need, although “finishing” takes on a more gruesome meaning. The idea of being free in nature offers an escape from the repressive atmosphere of the school; the girls are giddy with excitement at the prospect of release.

There is also sort of folk magic present in the girls’ fetishizing of Valentine’s Day — the art cards, the breathy words of poetry, the tying of hair ribbons, the wildflower bouquets left beside morning tea trays. This innocent romantic energy has a darker intensity in Sarah’s obvious obsessive crush on Miranda. “You must learn to love someone apart from me,” she says, and Sarah shakes her head in silent dismay; Miranda intones oddly: “I won’t be here much longer.”

The beautiful, soft-spoken Miranda is popular and adored; her upbringing on a Queensland horse farm gives her a mystical connection to the wild antipodean landscape. When she opens a gate at the base of Hanging Rock (yes, another metaphor), a murder of crows explodes noisily in flight. “Don’t worry,” she says as she smiles in the direction of the woodland path that leads up into the craggy peaks, “we shall only be gone a little while.” A bit later, she says, like a hesitant incantation, “Everything begins, and ends, in exactly the right time and place.” Everyone’s watch stops at 12 noon; the science teacher Miss McCraw (who also disappears) assumes it must be “something magnetic.” Time runs differently here; the girls become lost temporally as well as physically, almost as if they’ve been taken for some unknown purpose.

In this pastoral setting, complete with haunting pan pipes playing, the girls’ sensual nature is unleashed; they remove their shoes, stockings and corsets. It is the death of social custom, of good behavior, of practicality, of protection. Their behavior is almost ritualistic in its silent intensity. The foreboding camera angles, emphasizing the rock’s phallic shapes, suggest a powerful force that lures the girls into dark crevices of rock that swallow them whole.

When Michael and Bertie return to the Rock to try to find the missing girls, Michael refuses to leave, insisting on spending the night. Under the moonlight he scrambles, then crawls, up the rock, and when Bertie rides back the next day he discovers Michael suffering from exposure, in shock and unable to speak. But he stares forcefully at Bertie as rescuers put him on a stretcher, reaching out a trembling hand. What follows is, for me, the most thrilling close-up shot in all of cinema: Bertie’s hand opens and there is a scrap of torn, soiled white lace, like the hem of a petticoat, on his palm.

This clue, this fragment, this piece of the mystery, spurs Bertie on. Is it somehow symbolic? Of the girls’ rejection of the prim ways of Victorian society? Of their immersion into the wild landscape? Of the small scrap of knowledge men have of the intricate mystery of the feminine? Or are we meant to wonder whose clothing it came from? Is it evidence of physical harm? So much is happening in this tiny visual moment, every question and answer hanging in the air, unspoken. Weir was right to offer no closure, to let the mystery settle into our psyches over time, like rainwater etching pools into rock.