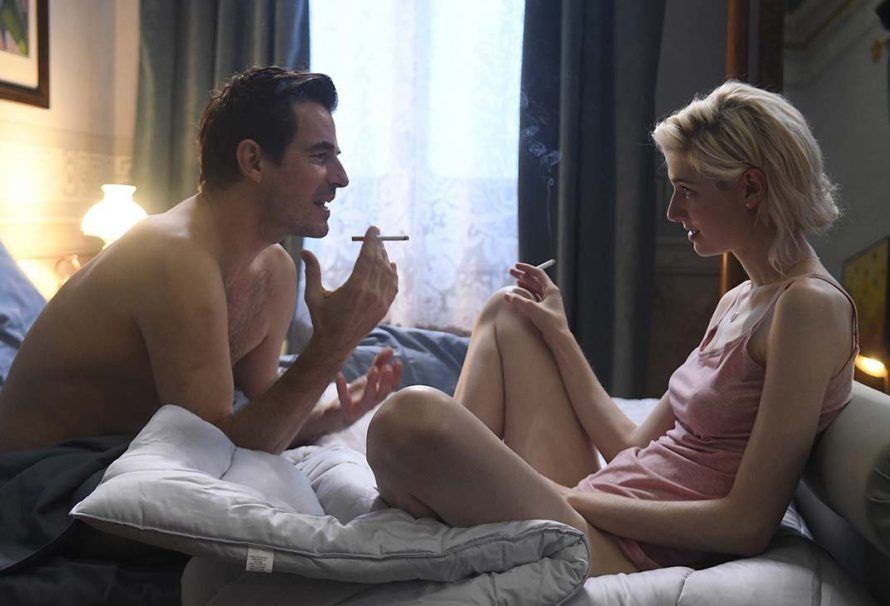 A Georgia good ol’ boy who takes a vow of silence until he achieves his dream of becoming the world’s greatest cockfighter. A blithe psychopath from California who moves to Miami and embarks on a new career as a fake policeman. A predatory used car salesman who suffers a spiritual crisis and decides the only thing to do is direct a movie. A struggling art critic who commits the ultimate act of sacrilege and ends up creating an accidental masterpiece.

These are the amoral antiheroes and doomed dreamers originally brought to life in the novels of Charles Willeford, and who have since made the jump to the silver screen. Willeford is rightly regarded as one of the (if not the single) best writers of postwar pulp fiction.  But despite a catalogue of over thirty titles, only four of his books have been adapted into feature films.

The latest of these is The Burnt Orange Heresy, a new thriller set within the upper echelons of the European art world and starring Claes Bang, Elizabeth Debicki, Mick Jagger (!) and Donald Sutherland. With the film’s limited theatrical release upon us, now seems the perfect moment to look at the individual movies made from Willeford’s writing, a small collection of cult oddities and minor masterpieces that deserves its own retrospective.

A true cult novelist’s cult novelist, Charles Willeford drew upon a lifetime of hardscrabble experience for inspiration. Born in Little Rock Arkansas in 1919 and orphaned at the tender age of 8, he spent his teenage years tramping through America during the Great Depression, riding the rails and pitching camp with his fellow hobos. At 16, he lied about his age and joined the army, eventually serving as a tank commander during World War II where he earned a bevy of medals and commendations, including a Bronze Star, Silver Star, Purple Heart and Luxembourg War Cross. After the war, he tried his luck as a painter, boxer, book critic and college instructor, all the while turning out dozens of stories for pulp magazine and paperback book publishers.

Willeford’s fiction contains all the two-fisted violence, seedy sexual depravity and punchy prose demanded by denizens of the dimestore, but they were also far more complex and intelligent (as well as much weirder) than you’d guess just from looking at their lurid—and often misleading—covers. Willeford had a keen ability to tear through the smiling façade of midcentury America in order to expose the depraved soul and black heart that lay below. Free of any trace of pedantry or pretension, his utterly unsentimental prose painted a realistic (yet often absurdly hilarious) portrait of societal order on the brink of collapse.

Despite the pessimism that pervaded his work, Willeford maintained a deep adoration for art in all its forms, film included. Film especially; according to his widow, Betsy Willeford, he developed a serious interest in cinema after discovering the underground and experimental film movement of the 1950s. Willeford even taught a Film Appreciation course at Miami-Dade, introducing students to foundational works of the silent era and from around the world.

Given his love for the medium, it makes sense he jumped at the chance to write the screenplay for the adaptation of his 1962 novel Cockfighter when it was optioned in the early ‘70s by Roger Corman. The legendary head of New World Pictures originally planned to direct the film himself, but he eventually handed the job over to Monte Hellman. Like so many members of the New Hollywood Generation—including Francis Ford Coppola, Peter Bogdanovich and Martin Scorsese—Hellman cut his teeth directing B-pictures for Corman, although by the time he came to Cockfighter he had established himself as an auteur of the American New Wave by way of his revisionist Westerns The Shooting and Ride the Whirlwind (both 1966) and existentialist road picture Two Lane Blacktop (1971).

Hellman brought several of the actors from the latter film along with him, including Laurie Bird, Harry Dean Stanton and most, importantly, Warren Oates, who went from playing an annoying motormouth in Blacktop to playing a self-willed mute in Cockfighter. Rounding out the cast was Willeford himself, who more than holds his own in a substantial supporting role. With his bald plate, bushy mustache and gravelly voice, he actually leaves quite the impression, not least of all because he bears a striking resemblance to Wilford Brimley. If he’d wanted to, he probably could have made it as a character actor.

Cockfighter delivers exactly what its title promises, following ace trainer and gambler Frank Mansfield (Oates) through Georgia on his quest to be named Cockfighter of the Year. Mansfield is a classic Willeford anti-hero: a stubborn, violent, but uniquely principled man willing to sacrifice everything he has—his money, his home, his true love, even his voice—in pursuit of an ideal which will prove his self-worth, even if only to himself. Hellman’s moody, contemplative style proves a good fit for Willeford’s narrative, which many will be surprised to learn is not the piece of Southern-fried hixploitation its grisly premise and frank title seem to suggest, but rather a tragicomic picaresque, albeit one drenched in buckets of chicken blood. (The animal cruelty on display does make the film a hard sell, to say the least.)

Although Willeford would later compare the process of writing a screenplay to “having a second hemorrhoid operation,” he found the overall experience a positive one, enjoying his time on set and admiring what Corman and Hellman were able to achieve with the finished film. But to the dismay of all involved, Cockfighter was a commercial failure. Corman—who rarely lost money on a film—tried to recoup his investment by rereleasing it under a new title, Born to Kill, but his efforts were all for naught.

Willeford had just begun to enjoy his first taste of mainstream success when he passed away at the age of 69 from a heart attack, having finally broken through to a wide audience with his popular detective series about the shambolic, but dogged Miami homicide detective Hoke Mosley. The first book in the series was 1984’s Miami Blues, an off-beat and exceedingly violent tale of a career criminal named Frederick J. Frenger, Jr., who accidently (and improbably) murders a Hare Krishna, before going on to steal Mosley’s badge and gun (as well as prized dentures) and embarking upon a crime spree through the streets of Miami. Willeford was aware that Fred Ward—the ruggedly handsome actor best known at that time for roles in Southern Comfort (1981), The Right Stuff (1983) and Remo Williams: The Adventure Begins (1985)—had optioned the novel, but he died before pre-production could commence.

Ward initially planned to portray Frenger in the film, while Gene Hackman was slated to play Mosley. However, after Hackman dropped out, Ward took over that part and Alec Baldwin was cast as Frenger, while a fresh-faced Jennifer Jason Leigh rounded out the cast. Jonathan Demme was approached to direct, but he passed the job along to George Armitage, whom he knew from their days working for—who else?—Roger Corman. Each of these changes was for the best: all three leads turn in stellar work, particularly Baldwin, whose animalistic performance makes him alternately terrifying and tragic. The film also contains some of his best comedic work, including a random scene where he tries out his best Cuban accent, or one in which he attempts to stop a liquor store robbery while armed only with a jar of tomato sauce.

Despite solid reviews across the board, Miami Blues suffered a similar fate to Cockfighter upon release, failing to recoup its modest budget. Like Cockfighter, it has since become a cult favorite, if not quite a full-fledged cult classic.

That’s still more than can be said for the third and least-seen film in the Willeford canon, The Woman Chaser (2000). Directed by the frustratingly reclusive Robinson Devor (Zoo, Pow Wow), this adaptation of the author’s 1960 “psycho-pulp classic” centers around Richard Hudson (Patrick Warburton, giving the performance of a lifetime) a gleefully amoral and at times downright satanic used car salesman who decides the only thing that will give his life meaning is to turn his idea for a movie—a bleak, existentialist road picture not entirely dissimilar to Easy Rider, Two-Lane Blacktop or any number of downbeat films to come out of the ‘70s (Willeford was nothing if not prescient)—into the real thing, and he’s willing to cross any and all moral and legal boundaries to bring his uncompressing vision to fruition. At its cynical core, the story is essentially a retelling of Ayn Rand’s The Fountainhead, but one which revels in its hero’s sociopathic tendencies, rather than excuse them by presenting selfishness as some kind of guiding moral principle.

If there is any movie from the last 20 years more deserving of rediscovery than The Woman Chaser, I haven’t seen it. With its stark black and white cinematography and wonderfully modest production design, it feels like a genuine artifact from the period it successfully recreates (it would make a great double feature with early independent films of that era such as Blast of Silence or The World’s Greatest Sinner). Similarly, Devor’s willingness to embrace the more transgressive aspects of the novel make it the purest distillation yet of Willeford on film.

(That said, curious viewers should be advised the version available to rent via streaming platforms comes in a shoddy transfer that’s not at all indicative of the film’s true visual richness. Hopefully, a restored version comes along sooner rather than later.)

Aside from Paul Giamatti’s failed attempt to bring Hoke Mosely to television several years ago, it’s been all quiet on the Willeford front until now. In The Burnt Orange Heresy, director Giuseppe Capotondi transplants one of Willeford’s most acclaimed novels, about a struggling art critic roped into stealing a painting by an elusive master, from the humid environs of Palm Beach to the lush paradise of Italy’s Lake Como, keeping the skeleton of the novel’s story, but chucking the rest. The result is the loosest of the four Willeford adaptations, and while it mostly succeeds on its own merits as a slow burn Hitchcockian thriller, it can’t help but feel like a wasted opportunity–especially when compared to three Willeford adaptations that preceded it,unique and unforgettable films one and all.

Regardless, the fact that there we’re getting a new Willeford adaptation is cause for celebration, since it guarantees increased exposure for his work. The release of The Burnt Orange Heresy couldn’t have come at a better time, coinciding with the 20th anniversary of The Woman Chaser and directly preceding the 30th anniversary of Miami Blues. There’s never been a more exciting time to be a Charles Willeford fan—or, in the case of lucky neophytes, a more opportune chance to give yourself over to his bleak but exuberant vision.

“The Burnt Orange Heresy” is out today in limited release.

Belle & Sebastian Go to the Movies

Why Young Actors Are Addicted to Addiction Movies

REVIEW: Quentin Tarantino’s Once Upon a Time … in Hollywood

Review: Raya and the Last Dragon