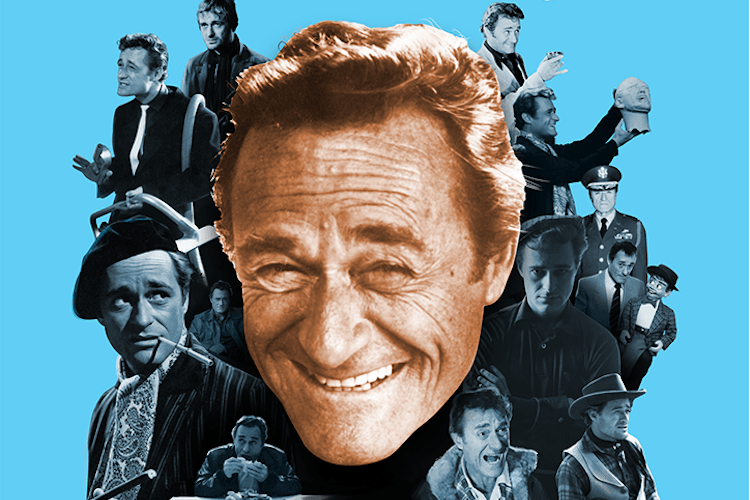 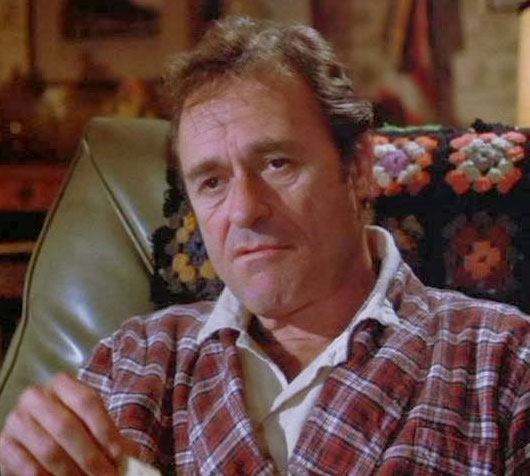 This is how Walter Paisley, the bumbling-busboy-turned-celebrated-sculptor played by the late Dick Miller in 1959’s A Bucket of Blood, is immortalized in verse by Maxwell H. Brock, the resident poet at The Yellow Door, the beatnik café where he scrapes together a meager living. Like Walter, Miller had artistic aspirations when he arrived in Hollywood in the mid-’50s. But while he thought he’d make a go of it as a screenwriter, he found his true calling as a member of B-movie producer/director Roger Corman’s stock company.

To start, Miller took supporting roles in the likes of Apache Woman, It Conquered the World, and Not of This Earth (often alongside pal Jonathan Haze), but Corman was quick to promote him to leads in Rock All Night, War of the Satellites, and A Bucket of Blood. He could have had a fourth if he hadn’t turned down the role of Seymour in The Little Shop of Horrors, but Miller felt the character was too close to the one he’d played the year before. Instead, he played a flower-eating man who acts as the inversion of Little Shop’s monstrous, man-eating flower, and settled into a six-decade run as the consummate character actor with hundreds of film and television credits to his name, including his very own feature documentary, 2014’s That Guy Dick Miller.

As a tribute to the preeminent That Guy, who died on January 30 at the age of 90, Crooked Marquee takes a look at the films in which Miller played some version of his signature character, starting with the one that birthed him. 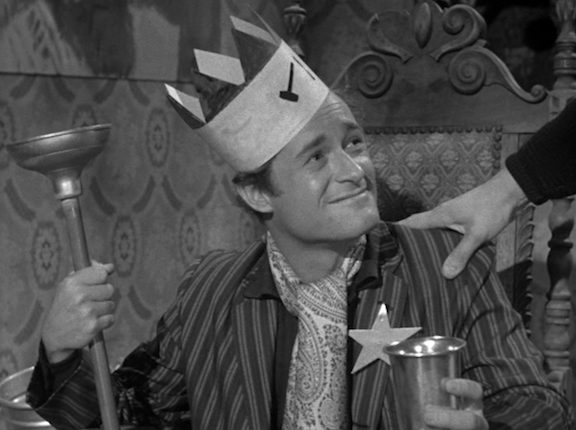 In addition to Corman and Miller, the third force behind the creation of Walter Paisley is screenwriter Charles B. Griffith, who penned many of Corman’s early films. In Griffith’s conception, Walter is a socially inept wannabe artist who longs to be taken as seriously as Maxwell H. Brock (Julian Burton). In fact, Walter commits Brock’s every utterance to memory and parrots them to himself and others as if they were beat gospel. “Repetition is death, Frankie,” he says to his landlady’s cat after accidentally stabbing it with a knife and before covering it in clay and bringing it to The Yellow Door to show it to his condescending boss Leonard (Antony Carbone) and encouraging co-worker Carla (Barboura Morris), with whom he’s smitten. His name for the piece: “Dead Cat.”

In short order, “Dead Cat” is joined by “Murdered Man” (Walter’s titles aren’t the most creative in the world), an untitled sculpture of a woman being strangled, and the bust of a furniture maker whose head was separated from his body with a buzz saw. With each murder, Walter becomes more crazed and violent (and starting with the third one, his actions more premeditated), but he remains sympathetic because of how naïve and guileless Miller plays him. Everything he does is out of the innocent desire to be liked and respected, not because he wants to make lots of money.

The same cannot be said for Leonard, who learns Walter’s secret early on, but keeps it to himself (as queasy as this sometimes makes him feel) because he’s hoping for a big payday when the art world takes an interest in Walter’s macabre sculptures, in particular an art collector with deep pockets played by Corman regular Bruno Ve Sota. It’s only after Walter springs a surprise proposal on Carla and she gently rebuffs him that he risks losing the audience, which knows full well what he intends when he asks to make a statue of her. Before he can follow through on his threat, though, Carla beats a retreat and Walter starts hearing the voices of his victims, which drives him back to his dingy apartment where he takes his own life. Upon the discovery of his dangling corpse, Brock quips, “I suppose he would have called it ‘Hanged Man.’ His greatest work.” And so it is. 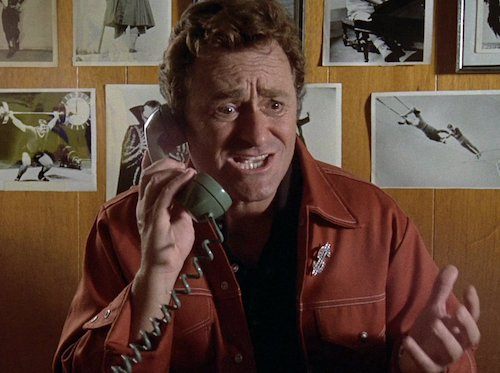 Suicide was not the end of the line for Walter Paisley, however, since he was reborn in the directorial debut of Corman protégés Joe Dante and Allan Arkush, who spent several years in the trenches at New World Pictures cutting trailers for its bumper crop of exploitation films. That’s how they knew where to find all the car crashes, gun battles, and explosions to cut into their own film to make it look like Corman actually gave them a decent budget. In addition, they had the wherewithal to cast New World fixtures like Paul Bartel (who had just directed Death Race 2000 for the company), Mary Woronov, and, of course, Dick Miller.

This time out, Walter Paisley is the low-rent agent of would-be starlet Candy Wednesday (Candice Rialson), who takes whatever assignments Walter can scrounge up for her, all of which are for the New World-like Miracle Pictures, where “if it’s a good picture, it’s a miracle.” Most of Walter’s scenes take place in his cluttered office (where his phones ring off the hook), but he also volunteers to drive Candy to the premiere of her big-screen debut at a drive-in, where it’s preceded by clips from 1963’s The Terror (in which Miller co-starred alongside Boris Karloff and Jack Nicholson). “Yeah, I used to be an actor,” he confesses when she recognizes him, but when asked why he gave it up, he responds that he “had a lousy agent.” Walter proves himself a great agent, though, by coming to his favorite client’s rescue when she drunkenly storms the projection booth to try to stop the movie and is sexually assaulted by the projectionist and another patron. Walter also puts in an appearance at the more upscale movie premiere that closes the film, in which he’s seen hobnobbing with Robby the Robot, who bemoans the fact that he hasn’t worked in a while. To quote Walter, “This business breaks your heart sometimes.” 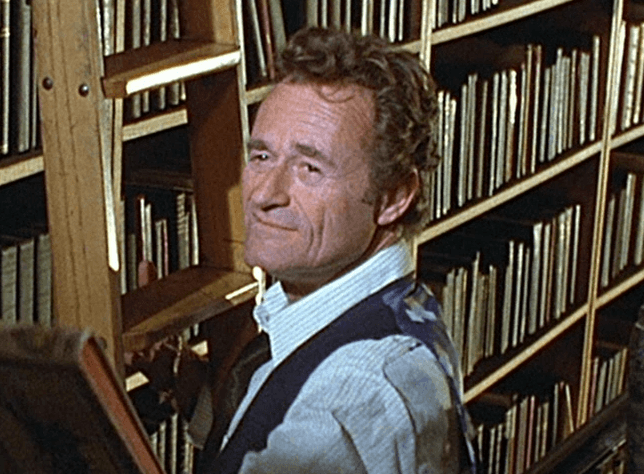 Having evidently enjoyed directing Miller in Hollywood Boulevard, Joe Dante made a point of finding work for the actor in just about every film he made thereafter, beginning with a juicy part as the corner-cutting owner of the water park that comes under attack in 1978’s Piranha. In comparison, the bulk of his role in The Howling – as Walter Paisley, cynical occult bookstore owner – is confined to a single two-minute scene, but he effortlessly steals it from co-stars Belinda Balaski and Dennis Dugan. As the purveyor of “occult objects for special people,” he sets the two of them straight about werewolf lore, including how often they transform and, crucially, how to kill one. “Silver bullets or fire, it’s the only way to get rid of the damned things,” he says. “They’re worse than cockroaches.” Being the good businessman he is, he naturally has a box of the former on hand. And when all of Los Angeles gets an eyeful of a real werewolf on the newscast that closes the film, Dante makes sure to cut in a reaction shot of Walter watching it along with everybody else. 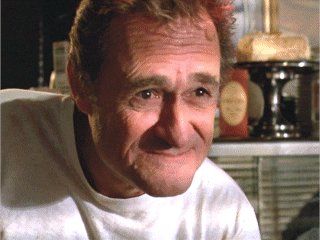 As in The Howling, Miller’s part in the Twilight Zone movie is a two-minute walk-on at the top of Joe Dante’s segment, based on the classic episode “It’s a Good Life.” (His next sizable supporting role would be as unemployed factory worker Murray Futterman in Gremlins.) This Walter Paisley is the owner of a greasy spoon who shamelessly flirts with a schoolteacher passing through town and has his slim chance of making it with her blown by: 1) an inopportune phone call from his wife, and 2) the belligerent fight fan who pushes a boy around who turns out to have the ability to manipulate reality and whose arcade game-playing style messes with the restaurant’s TV reception. Better luck next time, Walt. 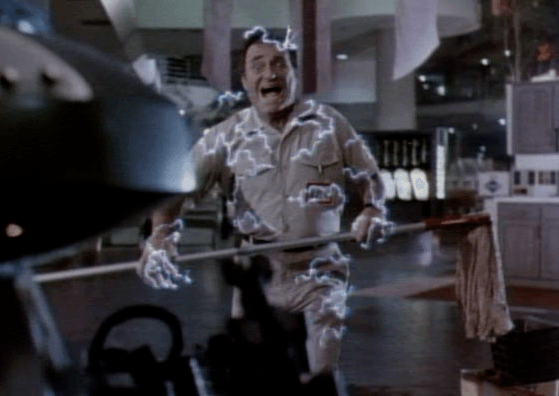 Having survived his three previous incarnations, it was only a matter of time before Walter Paisley’s luck ran out, as it does in this’80s slasher with a twist from producer Julie Corman (wife of Roger) and director Jim Wynorski (who cut his teeth writing scripts for New World). The twist is that the killers are a trio of robot security guards armed with sleep darts and lasers that go haywire when the control center of the upscale mall they’ve been purchased to patrol is struck by lightning. As for Walter, he’s been downgraded from restaurant owner to night janitor, which is why he’s still around to run afoul of the killer robots. At least he’s not their first victim, but he’s in and out of the picture so fast Miller never gets the chance to play anything other than grumpy. 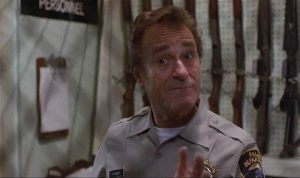 The same year Walter Paisley met his second demise at the claw of a homicidal robot, Miller played a cop called Walt in Fred Dekker’s zombie horror comedy Night of the Creeps. That’s also how he’s credited, but a close look at his name tag in the scene where Tom Atkins’s harried detective requisitions a flamethrower from him clearly shows his last name is Paisley. There’s also an Officer Paisley in Allan Arkush’s Shake, Rattle and Rock!, made for Showtime’s “Rebel Highway” series of movies based on the titles – if not the plots – of AIP teen films of the ’50s, when most of them are set. What makes Shake, Rattle and Rock! unusual is it’s also a prequel to Arkush’s 1979 film Rock ’n’ Roll High School, in which Miller played the unnamed police chief called in to shut the school down after the students take it over with the aid of the Ramones. (His assessment of the band: “They’re ugly, ugly people.”) Could this mean Officer Paisley worked his way up the ranks to become chief of police in time to face down another rock invasion? Only Allan Arkush knows.

In the quarter century since Shake, Rattle and Rock!, Walter Paisley has lain dormant, but Dick Miller fans have one last resurrection to look forward to. Just last year he wrapped production on his final film, a holiday horror called Hannukah from Eben McGarr, writer/director of the Universal monster homage House of the Wolf Man. No word on how large Miller’s part is, but he does play Rabbi Walter Paisley, who more than likely is the “wise Rabbi” described in the IMDb plot summary. Just goes to show you can’t keep a good Paisley down.