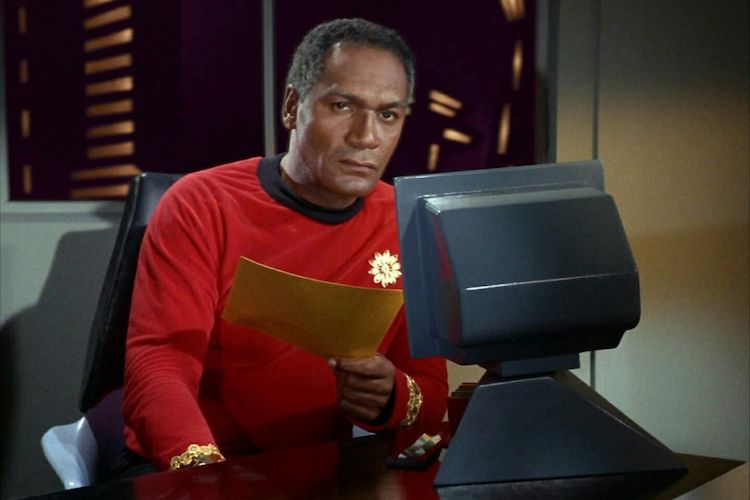 On the whole, movie trailers haven’t had narrators for over a decade. They’ve been replaced by overbearing musical scores, ominous cover versions of pop songs, or some combination of the two, along with snippets of dialogue from the movie’s characters. Just a few decades ago, however, the “trailer voice” was at its peak, and one of the masters of the form was Percy Rodrigues. He began acting in the 1930s, doing plays in his native Canada before moving to New York City at the age of 42, where he landed roles in several prestigious Broadway productions and joined The Actors Studio. He would go on to have over 100 credits in film and television, including authoritative roles on Star Trek (pictured above) and Peyton Place at a time when black men on TV were usually servants. But he’s best known as the voice from the trailers for numerous classic genre films. Here are a few selections of his prolific work.

“Somewhere between science and superstition…there is another world. The world…of darkness.” With those words, Percy Rodrigues made a huge, splashy entrance onto the trailer voiceover scene. His booming, ominous voice marries perfectly with images from William Friedkin’s seminal horror film, and the authority of it dovetails with the movie’s grounded, verisimilitude approach. Rodrigues’ tenor gets across the notion that the film is a frightening experience, and also sells the trailer’s last-minute note of hope.

While his voiceover for The Exorcist put him on the map, it’s Rodrigues’ narration for this film that made his vocal tone iconic, forever associating it with the horror genre. His voiceover begins with authority, creeping the audience out with allusions to real facts about sharks, before exploding into a full-blown horrific proclamation: “It is as if God created the Devil…and gave him…jaws.” That that line sounds awe-inspiring instead of laughable is a testament to Rodrigues’ delivery. There’s no doubt that some of the cultural psychological impact of Spielberg’s film is due to Rodrigues’ work here.

Shivers aka They Came From Within (1975)

David Cronenberg’s debut feature is a body horror hodgepodge of sexual deviancy and psycho-freakout sociological theories, a movie that’s as heady as it is exploitative. Being a rather hard sell, as it appeals to both intellectual and deviant audiences, the U.S. distributing studio Trans-American Films put together a standard, B-movie schlock campaign containing a half-dozen cheesy taglines. Fortunately, they got Rodrigues to narrate their trailer, allowing him to bring a measure of intelligence to the ad, which intrigued audiences rather than simply shocking or repulsing them.

Rodrigues brings his trademark authority to the narration here, listing star Robert De Niro’s achievements to date like he was introducing him prior to a command performance. Along the way, he evokes the strong undercurrent of horror present within Scorsese’s movie, implying the awful, inevitable end of Travis Bickle’s struggle with loneliness.

The Omen had a fascinatingly odd ad campaign, one that refused to clarify what the movie was about, save that it was ominous and terrifying. Rodrigues calls it “a film of psychological suspense” in the trailer here (oh, how modern day Horror Twitter would balk at that label!), an ad where the concept of Damien possibly being the Antichrist is merely hinted at. Perhaps that’s a result of director Richard Donner’s grounded, ambiguous approach to the movie, but whatever the case, Rodrigues’ narration is positively apocalyptic, making it an ad for a horror movie in all but name.

Rodrigues wasn’t just a pitchman for prestigious classics and early works of master filmmakers — he also shilled for schlocky B-horror fare, films that in their time haunted drive-ins and grindhouses. This movie, from which Tobe Hooper was fired as director and replaced by John Cardos, began as a street-level thriller about a night stalker and ended up as a half-assed cash-in on the burgeoning sci-fi horror trend. That is to say, it’s not good, but Rodrigues, through this trailer, makes it look and sound absolutely awesome. Ironically, the final tagline he speaks — “Not all alien encounters will be friendly” — is a clear wink to Spielberg’s Close Encounters of the Third Kind (1977), which Rodrigues would help advertise when that film’s Special Edition was released one year after The Dark.

The influential science fiction/fantasy magazine Heavy Metal finally got a feature film adaptation in the early ‘80s, taking several popular comic strips that had appeared in the publication and putting them on screen. To attempt to tie these disparate short stories together in an anthology format, a wraparound segment was made featuring the film’s narrator — a glowing green orb of ultimate evil. Who but Percy Rodrigues could voice such a character, with his booming voice making its threats seem credible?

Rodrigues’ narration is at its clipped, expertly enunciated best here, with each word popping off the screen. He delivers the throwback B-movie tone of director Fred Dekker’s film effortlessly, and manages to make an eye roller of a tagline sound eerily…well, creepy.

With his voice over for this trailer, Percy Rodrigues began an association with director John Hughes, later providing narration for the trailers for She’s Having A Baby (1988), The Great Outdoors (1988), Christmas Vacation (1989), and Curly Sue (1991). It’s no surprise, given Rodrigues’ skill at adapting his voice for lighter fare while retaining an ominous edge — perfect for Hughes’ comedies of increasingly stressful and tense circumstances.

When Universal Studios president Tom Pollack, a horror fan, greenlighted a ton of horror films for the studio in the late ‘80s, his successors had little idea how to market them when they were eventually released. A sequel to Don Coscarelli’s surrealistic, uniquely weirdo meditation on death, Phantasm (1979), made ten years after the original, was always going to be a tough sell. Fortunately, the studio got Percy Rodrigues to give it his best try, lending the tagline “The ball is back” such gravitas that it made the movie sound like a major event. Unfortunately, it didn’t work. It’s still super cool for us fans, though.

For the last few entries of the slasher series’ tenure at Paramount Pictures, Rodrigues became the official voice of Friday The 13th. While his narration was all over the trailer for the prior installment, 1988’s The New Blood, this trailer is the superior one in every respect, from its fake-out structure to Rodrigues delivering the final tagline with enough gleeful relish that it’s a shame he didn’t pursue becoming a late night horror movie host.

What 20th Century Fox and a lot of Alien fans expected from this sequel was James Cameron’s Aliens (1986), part two. What they got was David Fincher’s bleak, somber, pessimistic chamber piece, a far better and more interesting film than a reheating of Cameron’s would’ve been. Alien 3’s marketing campaign tried to cater to expectations even though they would not be met, making the cutesy promise that the “bitch” would be back. Despite that, Rodrigues nails the bleak tone of the movie quite well, beginning his narration with a delivery so evocative (“Here, in a world where the sun burns cold…”) that it’s almost a shame he didn’t narrate the actual film.

Rodrigues could turn his voice to evoke storybook whimsy, rather than ominous dread. Even so, his vocal quality allowed for a hint of subversion in each of these trailers, giving them the weirdo edge the filmmakers obviously wanted to imply. It wasn’t long after the Grinch trailer that Rodrigues’ output began to slow down, concurrent with the phasing out of movie trailer voice overs, and he passed away in September of 2007. It remains to be seen whether or not the technique will make a comeback, but regardless, the actor leaves behind a pioneering legacy that will continue to resonate, and his work stands as some of the finest examples of the “movie trailer voice” ever performed.