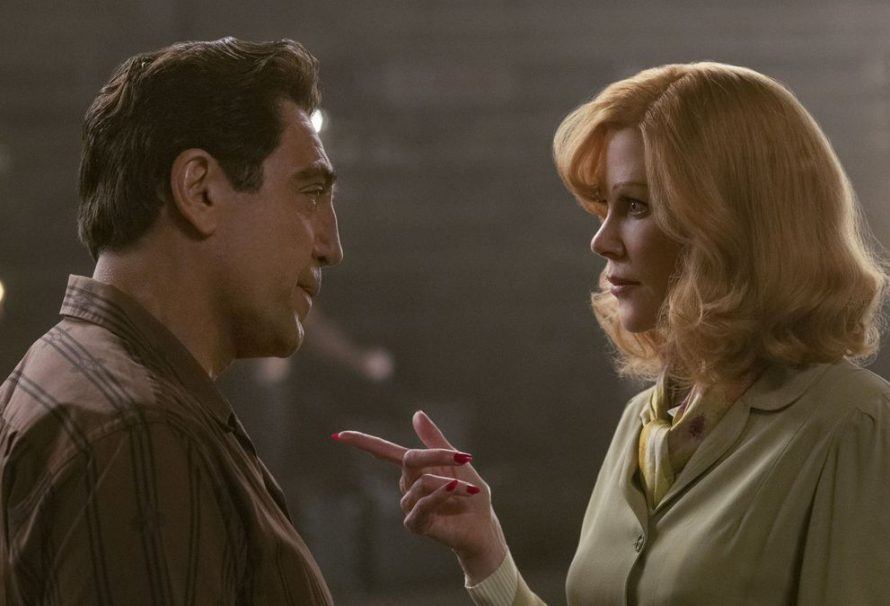 About 17 minutes into Being the Ricardos, I’d already had enough.

From writer/director/Jeremy Strong defender Aaron Sorkin’s perspective, the environment that created I Love Lucy every week back in the ‘50s was a toxic one. Co-stars were snapping at each other. The same goes for the writers, who were always dragging each other’s sense of funny. No one respected the guest director. And at the head of the table were the couple in charge, a workaholic Cuban and his ice queen of a wife, who would become one of the most beloved TV stars of all time.

Ricardos is another project where Sorkin shows the internal struggles that go down while making a TV show. In the past, Sorkin reserved this for the small screen, creating such self-righteous dramedies as The Newsroom and Studio 60 on the Sunset Strip, which was about a Saturday Night Live-ish show where everyone involved thought they were saving the world with their lame sketch comedy. (I’ll never forget hanging out with a friend at a party and spending most of the evening recalling all the batshit moments from that show’s lone season.)

Lucille Ball (played here by Nicole Kidman) could’ve been a character on Studio, since — according to Sorkin — she crafted her comic moments with the utmost seriousness. For most of the movie, she holds up a production week on an episode by constantly finding ways to properly block a dinner scene. Apparently, this was her way of coping with all the drama in her personal life. First, gossip king Walter Winchell accuses her of being a Communist on his radio show, even though she was cleared by the House Un-American Activities Committee. (She once registered as a Communist, just to appease her Communist grandfather.) She‘s also worried that her marriage to husband/co-star/business partner Desi Arnaz (Javier Bardem) is in trouble when a tabloid story drops that alleges he’s been creeping around. And let’s not forget the future arrival of another child, which the couple wants to write into the show but the execs (led by a hairpiece-enhanced Clark Gregg) are afraid to commit to. (Needless to say, this didn’t happen all in a week, but you know how biopics roll.)

For someone who is generally known as a TV legend, you get the sense that Sorkin doesn’t love Lucy all that much. Ball is generally portrayed as a neurotic, shrewish pill, pulling such dick moves as making sure her co-star and “best friend” Vivian Vance (Nina Arianda) didn’t look better than her on-screen. (Kidman practically walks into every scene like a stern headmistress about to rake students over the coals.) But she’s also characterized as a comic savant, visualizing those iconic moments from her show in her head as Desi and the writers (which include Arrested Development relatives Tony Hale and Alia Shawkat) spitball ideas for episodes.

While Lucy was Ball’s vehicle, Ricardos declares that it was Arnaz’s show. Even though he didn’t have an executive-producer credit, he was continually butting heads with execs, writers and the press in order to maintain control and keep his main squeeze happy. Apparently, this was something the Mrs. didn’t seem to appreciate. Even William Frawley, who played Fred Mertz (a crochety, lisping J.K. Simmons), had to have a mansplaining talk with his star about letting a man be a man.

Sorkin is indulgently going back to the Tinseltown of yesteryear, full of warhead brassieres, cameras with big-ass lightbulbs and powerful men who were so gotdamn casual in their condescending misogyny. He also tries to make a chronicle of the Ball-Arnaz love story, often flashing back to their early days when he was a touring bandleader and she was a B-movie actress who eventually got dumped by a studio for being too old.

But Ricardos comes off like a histrionic, sensationalistic, mawkish TV-movie, which is crazy since a histrionic, sensationalistic TV-movie about Lucy & Desi already happened thirty years ago. While he works with veteran David Fincher cinematographer Jeff Chenoweth to give everything a glitzy visual luster (this movie is obviously the work of someone who’s seen Bugsy way too many times), the dialogue and storyline are just cringe-inducing. Sorkin also gets mawkish and sentimental (with help from Daniel Pemberton’s hella manipulative score) in the third act as Lucy — still concerned that her career and her marriage might be in jeopardy — and her dysfunctional family of co-workers come together and put on brave faces as they prepare to face a possibly hostile studio audience.

The only thing the embarrassing-ass Being the Ricardos effectively does is remind us that maybe Sorkin should stay away from the studios and boardrooms of television and stick to courtroom dramas. It’s hard to believe that the guy who gave us last year’s The Trial of the Chicago 7 hit us with this bullshit.

“Being the Ricardos” is in theaters now. It streams Tuesday on Amazon Prime.