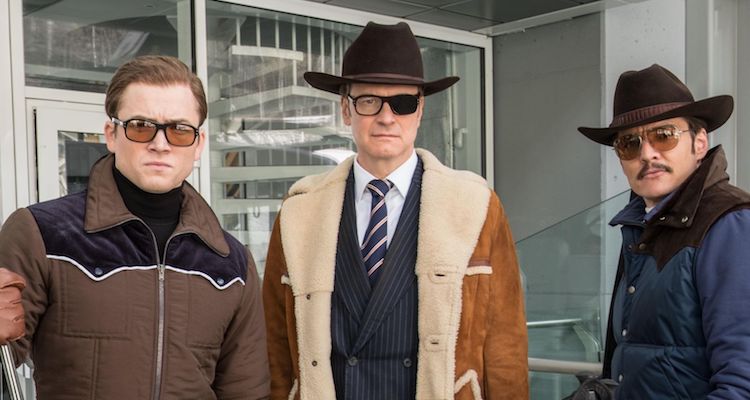 “That movie seemed very pleased with itself.” That was a non-critic friend’s assessment of Kingsman: The Golden Circle immediately after the screening, and it’s such an apt description that I have stolen it without attribution.

Whatever you thought of Kingsman: The Secret Service (I liked it), the sequel is longer, more bloated, and less entertaining, yet it constantly acts like it’s doing us a favor. Director Matthew Vaughn and co-writer Jane Goldman, both returning from the 2014 surprise hit based on the 007-skewing graphic novel, let the story sprawl out over 141 minutes even though much of it is just a retread of last time. (A villain whose ultimate goal is a perversion of progressive politics, whose co-conspirators’ bodies are marked with a symbol that gives them away, plans to infect the entire population with a mind-controlling virus. Sound familiar?)

It begins promisingly, with a terrific fight in and around a speeding taxi between our hero, chav-turned-spy Eggsy (Taron Egerton), and Charlie (Edward Holcroft), a former Kingsman applicant who’s now a bad guy with a robotic arm. At no point do the computer-generated stunts look convincing, but the sequence is ludicrous fun.

Unfortunately, it’s downhill from there, as the story continues to reference the James Bond formula without really satirizing it. Charlie is working for Poppy Adams (Julianne Moore), a smiling American woman who runs the world’s most powerful drug cartel from her ’50s-themed villain’s lair in the jungles of Cambodia, where she is protected by numerous goons and a pair of robot attack dogs. (She also has Elton John there to perform on command, having used Samuel L. Jackson’s mass abduction of celebrities in the last film as cover to steal one for herself.) Her sinister plan involves tainting her products, which run the gamut from marijuana to meth, with a deadly disease and extorting the world for the antidote. But first she’ll need to eliminate Kingsman.

Kingsman, you’ll recall, is England’s top-secret, off-the-books spy agency operating out of a fancy tailor’s shop on Savile Row. Eggsy’s mentor, Harry Hart (Colin Firth), was killed last time (OR WAS HE????), leaving tech-expert Merlin (Mark Strong) to guide him. Now they must join forces with their American cousins, Statesman, which operates out of a whiskey distillery in Kentucky.

Here’s where the film could have had a lot of fun, introducing us to the good ol’ boys who are counterparts to our well-dressed British spies. Vaughn assembled a good cast: Channing Tatum as the cocky Eggsy equivalent, code-named Tequila; Jeff Bridges as the big boss, Champagne, who goes by Champ; Halle Berry as Ginger Ale (!), the doctor and technician. But the three are given nothing to do, all of them confined to Statesman headquarters while a much less interesting agent, Whiskey (played by the much less famous Pedro Pascal), is assigned to assist Eggsy, Merlin, and Harry Hart (HE WAS NOT!) on their globe-trotting mission.

Vaughn is rightly proud of his ability to create action sequences that are frenetic but not chaotic in a variety of settings. The problem is that many of these scenes are gratuitous, padding out a thin story to the point of exhaustion. There’s an entire tangent, lasting about 15 minutes, in which the Kingsman guys set out to get A Thing; get it; then lose it and have to get it somewhere else … rendering the whole sequence moot. There’s also a bland domestic subplot with Eggsy and his girlfriend, the princess of Sweden (Hanna Alstrom), dragging out a joke from the end of the last film. Even the elements that work well, like Julianne Moore’s campy-evil villain, are hurt by overfamiliarity: we spend too much time with them, and it’s quantity, not quality. I bet there’s a 90-minute version of this movie that’s fantastic.

Eric D. Snider lives in Portland, where he dresses like a slob and doesn’t drink.