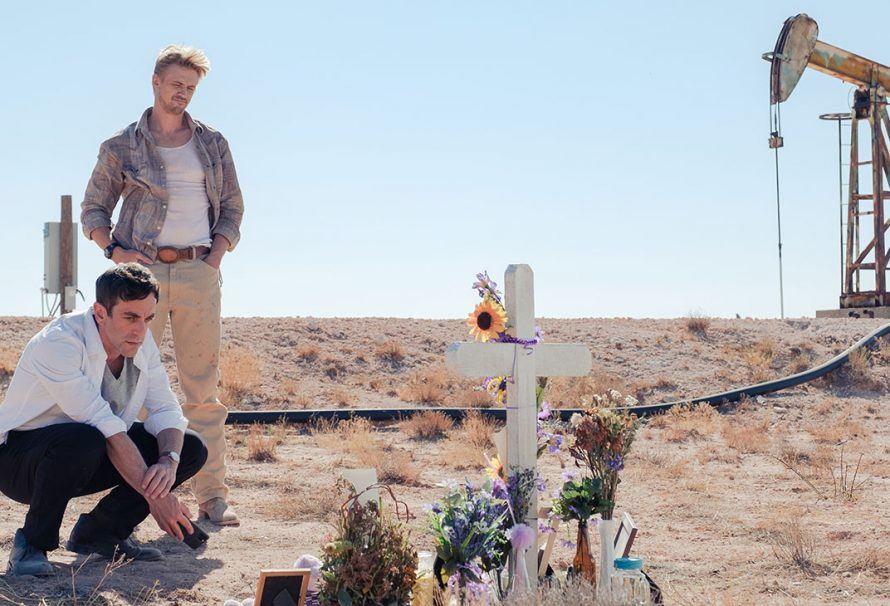 At the outset of B.J. Novak’s feature directorial debut Vengeance, Ben (Novak) and John (John Mayer, his only appearance in the film) huddle together at a swank New York City rooftop party to talk about their dating philosophies. The closest you should come to settling down, John explains, is dating two or three women rather than six or seven. Ben shares a similar outlook. He dates so many women that when he gets a frantic phone call in the middle of the night from a bereaved man in Texas, telling him of a woman’s death, Ben doesn’t immediately know who the person could be. What begins as a modern-day version of Swingers becomes far more revelatory and mature than one would expect.

Vengeance, a narrative concerned with subverting expectations, primarily builds itself around Ben, a self-absorbed, elitist east coast writer for The New Yorker, aiming to start a podcast in the hopes his voice might make a difference. His friend and editor Eloise (a delightful Issa Rae) hears Ben’s plans with a twinge of incredulousness. Put plainly: He’s a straight white man who finds his perspective imperative purely because it’s his perspective. But Eloise tells him to first find a story fashioned to strike the heart of America. He thinks he might’ve found his story when he visits Texas to attend the dead woman’s funeral, only to discover the family believes him to be her boyfriend.

The woman in question is Abilene Shaw (Lio Tipton). She died of an overdose in a barren, jack pump oil field. And yet, everyone swears the sweet Abilene, who harbored dreams of music stardom, wouldn’t take Advil  –  much less any opioids. Her family, believing she was murdered, wants vengeance for her death. Ben, however, sees an opportunity. What if he can leverage these gun-toting, conspiracy believing bumpkins to tell the story of America?

Novak’s Vengeance, a well-meaning satire seeking to humanize an oft-misunderstood portion of the country, treads best when critiquing the blind spots held by outsiders, even while stumbling over an overbaked ending.

Refreshingly, we’re not meant to like Ben; he’s a distasteful, exploitative human being. For one, he barely saw Abilene as more than a hookup, even though she seemed to believe their relationship meant more. We soon learn the other unsavory ways Ben ignored her. And in some respect, Ben is meant to see the error of his past “relationships” in this one woman. Still, before then, he interviews the various people in her life, hoping to build a podcast  — distastefully entitled “Dead White Woman”— which leans on a vapid cultural tourism with an intent to lampoon the area’s yahoos rather than to understand them.

Ty Shaw (Boyd Holbrook), Abilene’s naive, salt of the earth brother, surprisingly provides the moral compass of Vengeance. He guides Ben through the world of Texas: Ty takes him to rodeos, oil fields, and local bars where Ben inevitably sticks out like a sore thumb. At a rodeo, Ben mistakenly cheers for the University of Texas amid an overwhelming Texas Tech crowd. At every turn, Ben proves himself as a disingenuous interloper unwilling to to see these people as people rather than punchlines.

Novak’s sharp script charts the change in Ben’s views patiently and organically. Though Abilene’s family — composed of the stardom- obsessed sister KC (Dove Cameron), a well-read sister, Paris (Isabella Amara), a younger brother (Elli Abrams Bickel) scared of ghosts, a frank granny (Louanne Stephens), and a mother (J. Smith-Cameron) prone to passive aggressively saying “bless your heart” — helps to alter his world view, they never feel like overbearing teachable moments masquerading as characters. They begin as clichés, and ultimately grow into singular beings with each actor bringing an unforced level of sincerity to their respective role.

The biggest surprise in this infectiously funny movie is Ashton Kutcher as record producer Quinten Sellers. He owns a recording studio that’s been “making dreams come true since 2018.” He only has two scenes, but the first, is so bracingly minimalist, so controlled, it instantly rushes up the rankings of his best performances. In a story partly concerned with the artistic spirit and learning to find your own voice, Kutcher acts as the fulcrum point. While the later arc for his character lacks reason, arising out of thin air, his first scene exists as such a clear highlight in Vengeance, you spend the rest of the film awaiting Kutcher’s return.

In this narrative Novak also wants to discuss the opioid crisis striking America’s heartland by pointedly asking the question: Why do bad things routinely happen here? Most people outside of Texas will conveniently point to a lack of intelligence, or an inherent outgrowth of the political complexion of the area. Novak wants to reach beyond such simple explanations. And for a time, the balance serves him well. He doesn’t immediately fall into the pitfalls of other opioid narratives like Hillbilly Elegy; his film is concerned with uncovering the biases held by the east and west coast of America while subverting the partisanship shown toward Southerners.

Ultimately, even with neo-noir nods like Novak’s podcast voiceover and DP Lyn Moncrief’s shadowy cinematography, the mystery at the heart of Vengeance — what happened to Abilene? — isn’t wholly captivating. Novak’s script also relies on far too many coincidences to win the day, which only undermines suspense of the case even more.

But it’s the film’s cloying ending that nearly sinks the whole enterprise. Novak veers from striking a smart balance to colliding with an unconvincing extreme that totally betrays the growth within Ben. You wonder what Novak wants to say through the sudden act of violence afflicting the narrative’s final few minutes. Must certain acts only precipitate harm? It’s an odd, illogical leap in a film that felt so careful, so measured in its view of the world. Still, sterling performances from a deep ensemble and a winking, mostly self-aware script are enough to make Novak’s Vengeance a nourishing dish best served cold.

“Vengeance” is in theaters Friday.

The Power of the Dog, the Western, and the Myth of the Masculine Ideal

A Movie’s Got to Know Its Limitations: 50 Years of Dirty Harry