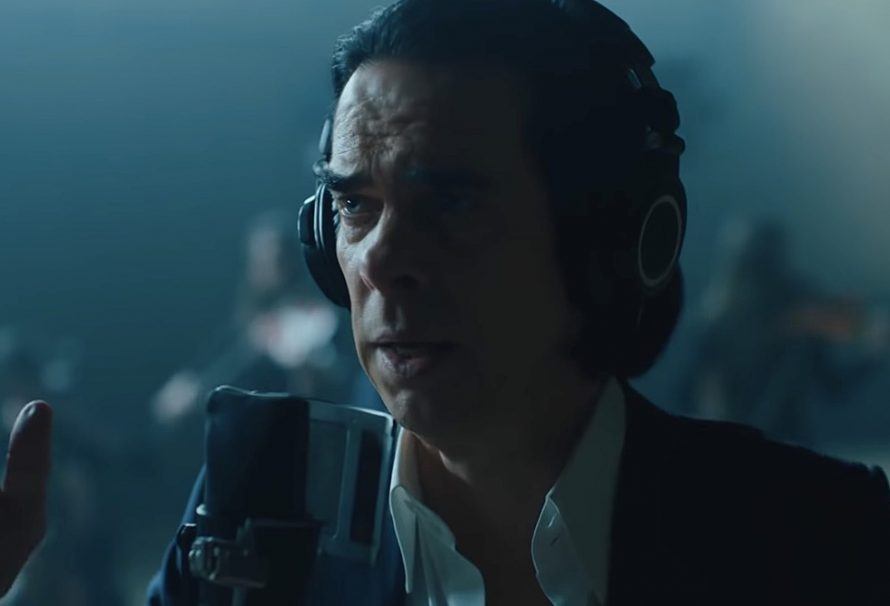 In an early scene in the documentary One More Time With Feeling, director Andrew Dominik tells Nick Cave that his songs have become “a lot less narrative.” Cave responds: “I wrote stories and they seemed to hold everything together in a particular point in my life, for a long part of my life, where things needed to be held together. But I don’t believe in the narrative anymore. I don’t actually believe that’s what life is like. That there’s a pleasing resolve and all that sort of thing to life. I just feel that to do a fractured narrative, a thing where time is actually compressed, events are stuck on top of other events, there’s no particular logic to it, or a distressing kind of logic to it, it’s much more real—or true to the way I feel about things.”

Cave’s disbelief in the narrative has extended to his collaborations with Dominik, and with Ian Forsyth and Jane Pollard. Over the past decade, the polymathic Australian musician has dismantled the conventions of the biopic, the in-studio documentary, and the concert film to explore how his music has evolved since he formed the band the Bad Seeds in 1984, and how personal tragedy has shaped his perspective on his body of work.

The 2014 feature 20,000 Days on Earth marked Cave’s first foray into nonfiction films. Directors Forsyth and Pollard depicted a fictionalized day in their subject’s life, one in which he writes lyrics in his office, goes to what seems to be a therapy appointment, drives around with some of his key collaborators, and consults with the employees of his archive on which artifacts should be included in an upcoming exhibition. As Cave talks about his life and his work, editor Jonathan Amos cuts from the musician’s observations to footage of him in the studio with frequent collaborator Warren Ellis. Because Cave’s dialogue sets them up so obliquely, the edits have an intuitive, almost free-associative quality that shows how closely his life and his art can intertwine. They also depict how Cave has matured as a person and an artist, and how some of the themes in his songs have remained consistent throughout his work.

Forsyth and Pollard’s saturated palette and symmetrically staged shots for 20,000 Days on Earth suggests I Am Trying to Break Your Heart by way of Wim Wenders. Cave frequently appears in tableau-style shots, as in an early shot of him at his typewriter that later appeared on the poster. DP Erik Wilson shoots him from low angles, giving him a godlike appearance, but his slightly distorted lens makes some compositions feel like the walls are closing in on his subject. This contrasting style suggests both the way Cave’s fans see him and also the way he might feel constrained by his image and by the place he’s at in his life. In the scenes in the therapist’s office, Cave’s trademark black suit blends into the dark background, tying him to his surroundings and his current moment and making him look like a ghost haunting his own past.

Cave’s immediate family threads through 20,000 Days on Earth. He speaks of seeing twinned images while his wife was pregnant with their sons Arthur and Earl; the twins themselves appear at the tail end of the film, tucking into dinner while watching Scarface with their dad. This image haunted me as I watched One More Time With Feeling, although no one could have expected it to have that effect when the film was made. Arthur Cave, one of Nick’s twin sons, died in a cliffside accident in 2015, a loss that cast a shadow across Cave’s later work. The 2016 documentary depicts the recording of Skeleton Tree, the album he made in the wake of his son’s death.

In an interview with IndieWire, Dominik spoke of why the film was made: “Nick decided to go along and finish the record. When he realized he had to promote the record, the thought made him feel sick: talking to journalists, discussing Arthur. He didn’t feel he could do it with strangers. The initial instinct for Nick was to protect himself, so he didn’t have to answer questions. It becomes the only subject that there is, all the film is dealing with is Nick’s grief feelings.” Cave and Dominik have a long professional and personal history; they both dated the same woman at different points in her life, and Cave would later score Dominik’s feature The Assassination of Jesse James by the Coward Robert Ford.  You can feel the sense of trust Cave has in Dominik throughout the film. Dominik shoots many of the interviews with Cave and his family at home in Brighton (including one surprisingly intimate shot of Susie, Nick’s wife, in the lavatory), and in a late-in-the-film interview where Cave speaks candidly to Dominik about the loss of his son and the effect it had on his life and on making Skeleton Tree.

The theme of skepticism in the narrative extends to the way the film is made. Dominik and DPs Benoit Debie and Alwin H. Kuchler frame much of  the studio footage to include camera equipment; camera tracks snake across the floor, and a key light with a parabolic reflector around it appears in several shots, casting a halo around Cave and Ellis. One shot of Ellis playing violin in silhouette before the light suggests gilt-edged Renaissance paintings of saints, which plays into the religious iconography that runs throughout Cave’s music. In other scenes, this is played to humorous effect. Cave frequently addresses the fact that he’s in a documentary, most notably in an early scene where he emerges from a dressing room bare-chested under a suit jacket and asks Dominik “do you want me to put a shirt on and stuff?”

A similar vein of wry, dark-edged humor runs through the opening scene of This Much I Know to Be True. Cave is seated at a small table, wearing a white lab coat over his suit. When given a cue, he announces that he has ignored the advice of his manager and decided to take up a new career as a ceramicist. He then shows a series of beautiful, detailed sculptures depicting the life of the devil. The incongruity of Cave walking away from his career and taking up something so seemingly genteel is intrinsically funny, and he plays the scene with an understated sense of self-awareness. At one point, he shares a sculpture of “the devil in remorse” after killing his son, and even before the shot cuts to a pained close-up of Cave contemplating the sculpture, the mood shifts from one of waggish drollery to heartache.

The interviews in This Much I Know to Be True—interspersed between incendiary live performances—walk a similar line between deadpan humor and matter-of-fact sadness. Those who warmed to Warren Ellis’s avuncular presence in 20,000 Days on Earth and One More Time With Feeling will appreciate the extended interview Dominik conducted with the maestro in his townhouse in Belgravia, in which he sheepishly admits “I don’t really have a sense of form and order” as he shows a computer desktop covered in files. Editor Matthew C. Hart cuts between Ellis and a separate interview with Cave in which he dryly observes that “Warren is almost always on transmit and not so much on receive, I would say. Although, he might see that as unfair and wrong.” There’s a barbed sense of warmth to Cave’s observations, and viewers can see how well he and Ellis are matched in their collaboration.

While Cave and his cohort don’t talk about Arthur’s death, there’s an implicit theme in This Much I Know to Be True of the ways community can help lighten the load that comes with grieving. Towards the end of the film, he compares his newsletter, the Red Hand Files—in which his fans email him questions and he responds—to a séance or a religious gathering, in which people who don’t know where else to turn come to him and his community to be heard or to get advice. One letter he reads comes from a young person whose brother recently died, and while Dominik doesn’t dwell on Cave’s response, the thoughtful words he extends to his correspondent speak to the tragedy he experienced and his way forward.

That contrast between grief and catharsis also comes through in the music. When COVID-19 spikes postponed Cave’s tour, he convened with his band in what looks like a gloriously dilapidated ballroom to shoot this film. As with the studio footage in One More Time With Feeling, Dominik (and cinematographer Robbie Ryan) keep camera equipment in the frame, reminding viewers they’re watching a movie, but the performances are as fiery as what you’d experience at a live show. Ellis’s violin dervishes and moments of wild-man antics make a sharp contrast with his more understated appearances in these films, and the gospel-influenced backup vocals tie the religious imagery of Cave’s lyrics to the southern church.

Towards the end of This Much I Know to Be True, Cave thanks a choir for their appearance in the film and their work with him on his albums. After the heavy emotions of the previous documentaries, this small moment of gratitude gives these documentaries a small sense of what the singer would describe as “pleasing resolve”. Life might not have a sense of narrative, but sometimes there are small moments that allow you to keep going.

Chelsea Spear is returning to arts writing after spending a few years correcting other people’s grammar. Her byline has appeared at the Brattle Theatre’s Film Notes blog and in the pages of The Gay & Lesbian Review. She lives in Boston.

The Musical Moments and Motifs of Danny Boyle

More Than a Swan Dress: Bjork on Film

Review: John and the Hole