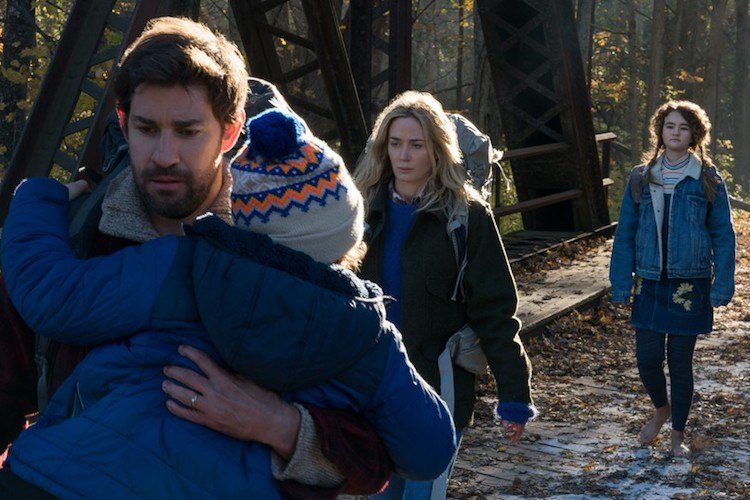 I can still feel the weight on my chest as my husband and I left the theater in silence after A Quiet Place. As a parent in general — but specifically as a parent of a little black boy — it felt all too real, this high-stakes world in which merely existing can be deadly and the smallest mistake could snatch everything away. A Quiet Place (now on DVD/streaming) was an allegory for my life as a parent that I wasn’t expecting to get.

I watched in pure gut-wrenching horror as the youngest child, Beau, was taken away by one of the sightless creatures that inhabits their world. It’s a helpless feeling: There was nothing that could have been done to save him. Both parents’ caution and care weren’t enough to overcome this one time their child decided to be a child in a world where that’s tougher than it ought to be.

There are many fingers to go around when it comes to the blame game. Why wasn’t Beau carried like his older brother? Why was he walking behind everyone else? Why did his sister give him the toy after his father took it away? All valid questions — but hindsight is 20/20. Parents are human and very much full of lapses in judgment. It’s only in a world where the stakes are unnaturally high that those lapses are unforgivable.

I instantly thought of Tamir Rice, the young black boy gunned down by officers while playing with a toy gun in the park. Numerous questions have been asked about how that incident could have been prevented, many of them putting the onus on the child and his parents and overlooking the fact that the stakes shouldn’t be so high. It simply should not be that playing with a toy gun can result in a child’s death, but that’s the society we live in. Beau turning on a noisy toy shouldn’t have cost him his life, either. In that moment, all the “right” things his parents had done before didn’t matter — all it took was one slip-up in an unforgiving world.

When Lee sets off with his eldest son to show him the daily routines necessary to navigate this world, I couldn’t help but think of how someday my husband will teach our son how to drive, something that should be as mundane as fishing but which requires more lessons when the child is black. We’ll have to teach him how to behave so that he lowers the likelihood of becoming a hashtag, another life lost for Driving While Black, pulled over by someone with an itchy trigger finger. And we’ll know that even if he does all the “right” things, it could still not be enough.

So why continue to bring children into a world that is so hostile to them? That question crossed my mind (maybe yours, too) when it’s revealed that Evelyn is pregnant, a year after Beau was killed. I’ve wondered the same thing. Why would my husband and I bring a child into this world knowing how hostile it can be to black people and other marginalized people? Maybe it’s the hope that things can improve. Maybe we can provide a life that offsets the ugly reality, perhaps raising an individual who will be part of finding solutions to make the future better.

The film thankfully ends with a glimmer of hope. Regan, the daughter, finally realizes that her cochlear implant has an effect on the monsters, giving her mom a chance to take one out. The reprieve is short-lived — the gunshot brings more of the creatures — but the hope of a safer tomorrow rings out. The sacrifice and heartache might not be in vain. As the credits rolled, I sat in my seat and shook, quietly pondering parenthood and the lengths to which I’ll go to keep my child safe in this harsh world.