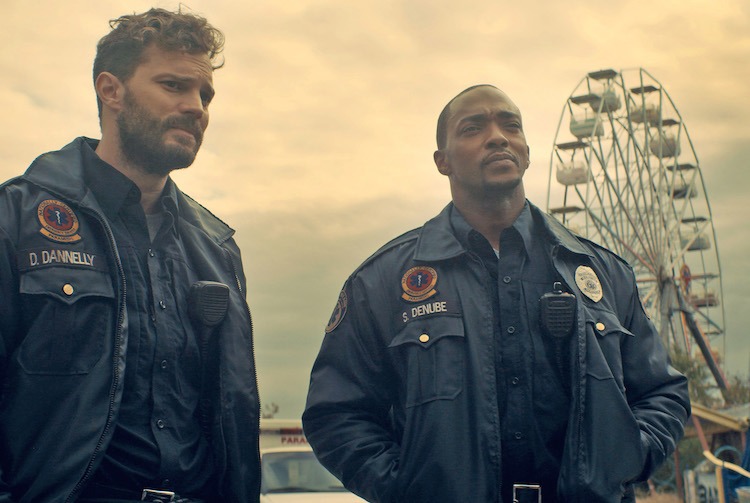 Justin Benson and Aaron Moorhead have been floating around the edges of indie sci-fi/horror for the last few years, writing and directing thoughtful under-the-radar films like Spring (2015) and The Endless (2018) that were acclaimed in certain circles but didn’t get much mainstream attention. The duo’s latest, a moody sci-fi drama called Synchronic, could be the one that crosses over. It’s their most polished entry to date and the one with the most recognizable cast, with Anthony Mackie and Jamie Dornan starring as New Orleans paramedics Steve and Dennis who start getting emergency calls for gruesome, inexplicable injuries (like a venomous snake bite in a locked hotel room, no snakes present) caused by a designer drug called Synchronic. As your knowledge of Greek root words may suggest, Synchronic affects the user’s perception of time, and it does it in ways that are not entirely hallucinatory. To put it bluntly: Side effects may include time travel. This becomes personal when Dennis’ 18-year-old daughter (Ally Ioannides) goes missing after taking the drug and Steve sets out to find her — which means determining how, exactly, the drug works.

The procedural aspect of Steve semi-scientifically experimenting with Synchronic is enthralling, aided by Mackie’s coolly intense performance and our own geeky love of sci-fi concepts being treated seriously. Complemented by Jimmy LaValle’s appropriately dreamy musical score, Benson and Moorhead’s style is languid but never draggy, favoring long Steadicam shots that follow the EMTs in the course of their duties. The issues in Steve and Dennis’ friendship and Dennis’ relationship with his wife (Katie Asleton) are less compelling, but they flesh out the human aspect of the story. These filmmakers keep doing such impressive work with small budgets that I almost can’t imagine what they’d do with a big one — but I’d like to find out.