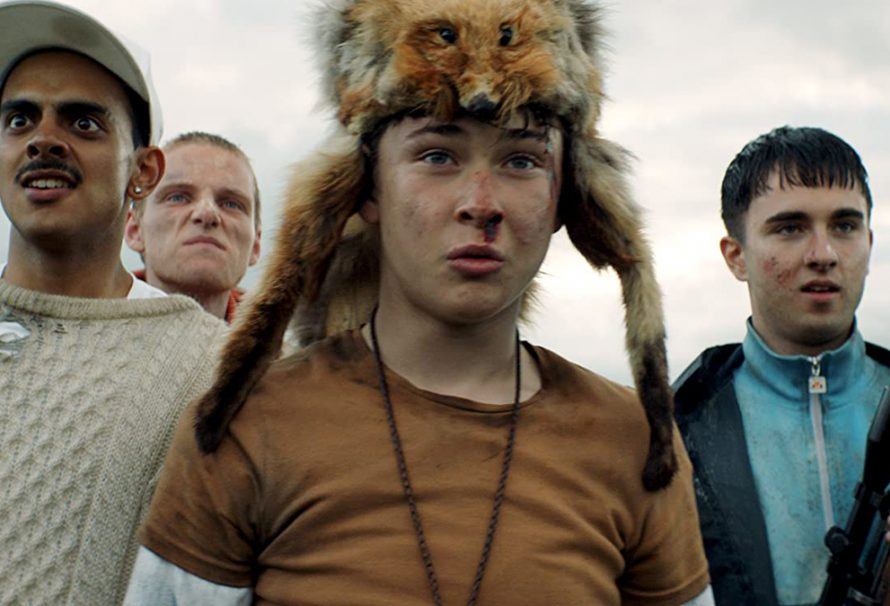 Perhaps the best way to gauge your potential enjoyment of the newly-streaming British comedy Get Duked! is by your reaction to the film’s biggest joke. How much do you enjoy the idea of watching venerated actor James Cosmo–Game of Thrones’ Commander Mormot–gleefully tripping balls on rabbit poo? If the answer is “a lot,” congratulations, you’ve found your recommended weekend movie. If you feel anything less than enthused, Get Duked! may not be your thing.

Writer-director Ninian Doff’s first feature is a comic adventure that recalls Joe Cornish’s Attack the Block, if Cornish had plunked his young heroes in the Scottish highlands and stripped the whole thing of social commentary. As silly as the movie is, it isn’t without some earnest charm. If you come in looking for a diverting good time, you may find yourself won over by the credits.

Duncan (Lewis Gribben), Dean (Rian Gordon) and DJ Beatroot (Viraj Juneja) are teenage delinquents whose teacher, Mr. Carlyle (Jonathan Aris), gives them an ultimatum: they must successfully complete an outdoor enrichment course called The Duke of Edinburgh Challenge, or be expelled from school. Mr. Carlyle drops the boys off in the highlands along with Ian (Samuel Bottomley), a sheltered kid who loves the outdoors and volunteered for the experience.

As the troublemaking quartet journey toward their rendezvous point, they encounter a variety of characters, including Cosmo’s hallucinogen-loving farmer and a pair of homicidal toffs (Eddie Izzard and Georgie Glen) who turn the trip into a “most dangerous game” scenario. The boys are also pursued by two small-town cops (Kate Dickie and Kevin Guthrie) who are convinced these pubescent boneheads are some kind of terrorist group.

In its first third, Get Duked! feels as goofy as its main characters. The kids lumber around the countryside and make dumb decisions you can see coming a mile off. These sophomoric setpieces get some flash and attitude from Doff’s music video proclivities and a soundtrack that makes strategic use of Run the Jewels’ “Legend Has It” (Doff has realized, as many filmmakers have, that adding RTJ to your film automatically elevates it by 10 percentage points).

The movie also gets a boost from its cast, full of game performers bringing their best to material they’re undeniably overqualified for. Dickie is deadpan fun as a crusading cop; she’s outdone only by Alice Lowe, in a great cameo as Dickie’s boss. Izzard is excellently cast as an evil, rich murderer, and British TV regular Aris gets some good room to stretch as Mr. Carlyle.

As the plot threads Doff sets up start to strengthen, Get Duked! becomes genuinely enjoyable and surprisingly sweet. The farmer and his clan take DJ Beatroot under their wing, resulting in a wild musical sequence that employs trippy visual effects and produces a legitimate banger of a track. While not everything else lives up to the promise of this section, that moment, and the payoffs that follow, do a lot to win over skeptical viewers (including this one).

Get Duked! may seem like a chronic underachiever of a movie, but there’s some good work here that’s worth giving credit to. It’s certainly not the smartest film you’ll see all year, but it’s still enjoyable, and displays some decent writing and directing skill on Doff’s part. If you’re looking for something easy to enjoy after a long day, you could do a lot worse. The movie sets its sights on a fairly low bar for enjoyment, and crosses that bar with ease.

“Get Duked!” is now streaming on Amazon Prime Video.

Review: Birds of Prey: And the Fantabulous Emancipation of One Harley Quinn