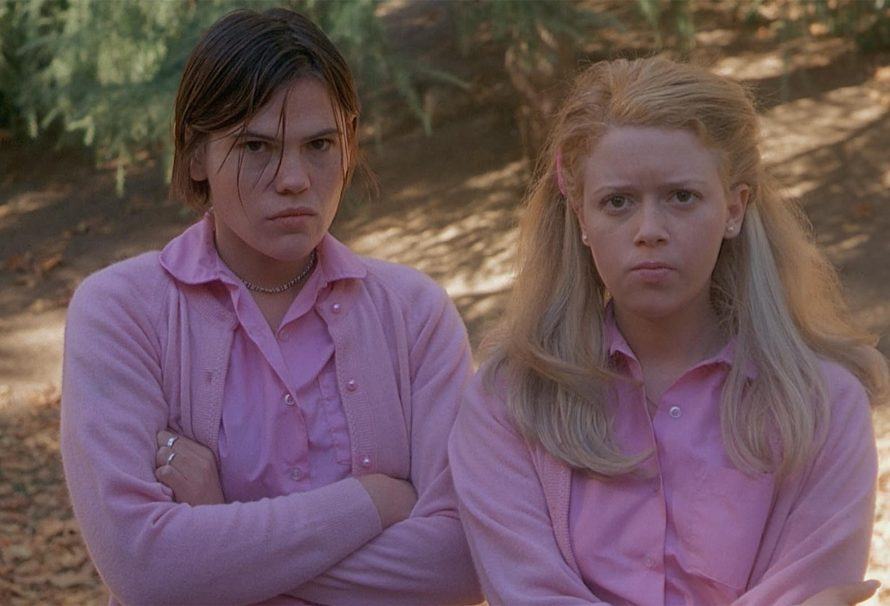 It is fascinating now, in 2020, when Jamie Babbit’s But I’m a Cheerleader is a celebrated cult classic of queer cinema—recognized by the Criterion Collection during Pride, no less!—to look back on the film’s initial reception in 2000. The reviews were, to be blunt, cruel. Slate called it “sniggeringly one-sided” and “lazy counterpropaganda.” Salon described Babbit’s film as “desperately forced and outmoded.” The New York Times said the coming-out romantic comedy belonged “to that growing category of film best described as ‘It Would Have Made a Great Sketch on Saturday Night Live or Mad TV.’” And more column inches (because hey, newspapers still existed back then!) were devoted to discussing But I’m a Cheerleader in comparison with the filmography of John Waters than on the tender coming-of-age story’s own merits, like the welcome zaniness of Natasha Lyonne’s lead performance or the righteous militancy of fighting for those you love.

A purposeful blending of pop culture references, from the twisted ‘50s appeal of Tim Burton’s Edward Scissorhands to the vibrant fuchsia world of Barbie and her Dreamhouse, But I’m a Cheerleader could be mischaracterized as pure fluff. The score from Pat Irwin, longtime member of The B-52s, is a blend of bouncy new wave and emotively sparse keys and strings. Alix Friedberg’s costume design reimagined mid-century shapes in modern fabrics—lingerie with exposed boning and mesh, tea-length dresses in shiny pleather—to evoke counterculture fashions. There are a lot of rainbows; the home of ex-ex-gays Larry (Richard Moll) and Lloyd (Wesley Mann) Morgan-Gordon is awash in bright, cheery, subversive color.

Yet to dismiss But I’m a Cheerleader as merely a stylized foray into gay and lesbian representation (some of it, to be fair, stereotypical) is to ignore the undercurrent of tangible anger and pain that drives Babbit and screenwriter Brian Wayne Peterson’s satire. True Directions, the conversion-therapy camp the teens attend in the film, is played for laughs, but these harmful practices still continue throughout the United States. According to the Movement Advancement Project, an LGBTQ-focused think tank, there are 29 states in the U.S. without  laws or policies regulating or banning such abusive therapy for minors. The primary friction of But I’m a Cheerleader comes from parents who threaten to abandon or disown their children if they don’t “quit” being gay or lesbian, as if choosing your sexuality is a thing people can do. Those stories remain an all-too-common facet of the coming-out experience, too. On the one hand, maybe But I’m a Cheerleader is a little bit of a fantasy, romantic wish fulfillment. But on the other hand, don’t we all deserve that, no matter who we love?

But I’m a Cheerleader focuses on 17-year-old Megan Bloomfield (Lyonne, playing against the cool-broad persona that was introduced in American Pie and has subsequently stuck), who is as all-American as they come. She wears her reddish-blond hair in soft, full waves, held back by a headband and religiously brushed each night. Penny loafers and ankle socks go with her sleeveless, full-skirted sundresses. A gold cross hangs around her neck, pearl studs in her ears. She loves her high school, and cheering for its football team, and tousling her pom poms, and watching the other girls on her squad. The teens’ leaps, jumps, and acrobatics sometimes reveal a glimpse of what’s underneath those sports bras and pleated skirts. It’s her fellow cheerleaders who Megan thinks about when serving as an unenthusiastic receptacle for her boyfriend’s slobbering kisses, and it’s a Melissa Etheridge poster that hangs on her bedroom wall, and it’s a George O’Keefe-evoking pillow, with a giant vaginal flower embroidered on it, that she cuddles up to each night.

When Megan’s parents, boyfriend, and friends ambush her for an intervention, they sugarcoat their homophobia in false solidarity: “We’re not accusing, we’re supporting,” says True Directions counselor Mike (RuPaul, trying his hardest not to wink at the camera the entire time). But when Megan’s parents drive her to True Directions, housed in a Victorian-style mansion blatantly decorated in gender-normative baby blue and bubblegum pink, it’s clear that this is desertion. They are leaving her to True Directions director Mary Brown (Cathy Moriarty) and her five-step process, and if Megan hasn’t wholeheartedly embraced heterosexuality and a diminutive feminine personality by the end of these two months, they don’t want her back.

The other teens at True Directions are in the same boat: threatened by their families; bullied by Mary and Mike into admitting that they are homosexual; and forced to endure the embarrassment of group and family therapy and the tedium of reorienting exercises. Some of the teens are willing to go along with Mary’s lessons, like the blandly earnest Hilary (Melanie Lynskey, speaking in her natural Kiwi accent), but others are less inclined. Dancer Andre (Douglas Spain) is unrepentantly flamboyant; varsity wrestler Dolph (Dante Basco, Rufio-ooo!) and retail employee Clayton (Kip Pardue) are making eyes at each other; and True Directions’s resident bad girl is Graham (Clea DuVall, walking so that Kristen Stewart could run). Bitingly sarcastic but clearly aware of how to manipulate Mary’s system of rules, Graham mocks the “sweet as fucking pie” Megan relentlessly: scandalizing her with profanity, criticizing her virginity, and undercutting her obsessive desire to be “normal.”

You can obviously guess where But I’m a Cheerleader is going to go once Megan sees Graham for the first time, languidly reclining on a pink comforter in their shared bedroom, a cigarette dangling from her lips, and when Graham watches Megan’s satin-clad ass as she leaves. But the formulaic nature of their romance doesn’t diminish Lyonne’s and DuVall’s chemistry, or the gentle sensuality of their first night together, or the issues the film wades through as the young women fall in love. Babitt demonstrates Megan’s isolation by often framing her utterly alone, letting Lyonne’s saucer-sized eyes communicate her indecision and uncertainty; when she faces her parents and Mary after sneaking out one night, they’re positioned like a firing line against her.

The tasks Mary assigns the teens are goofily old-fashioned, like chopping wood and scrubbing carpets, and Peterson’s script finds humor in how Mary seems to operate within her own echo chamber, raging about “liberal arts brainwashing” and the evils of women wearing pants. But the motivation behind Mary’s actions—to strip these teens of who they know themselves to be—and the insidious cruelty of her methods are never soft-pedaled by But I’m a Cheerleader, and the film’s concerns about finding yourself and finding love remain urgent as a result. And the impact the film has had on queer cinema, despite those early negative reviews, is obvious. Consider how Desiree Akhavan’s underrated 2018 film The Miseducation of Cameron Post ends on a final shot that is a clear homage to the hopeful concluding moments of But I’m a Cheerleader. And consider the tonal similarities between But I’m a Cheerleader and a number of other queer romantic comedies, like the quirky I Love You Phillip Morris or the upcoming Happy Season, co-written and directed by DuVall and starring Stewart and Mackenzie Davis.

“Do you see how easy it could be?” Mary says to her students of renouncing who they are, and for all her talk of depraved homosexual seduction, it’s True Directions’ temptation of insincerity that is most dangerous. How lovely it is, then, when Megan and Graham choose each other, and choose to live as they are. “There’s not just one way to be a lesbian,” ex-ex-gay Lloyd had told Megan, and the film makes space for that diversity, and that personal freedom. But I’m a Cheerleader ends before the logistics of Megan and Graham’s lives are figured out—how they’ll support themselves, where they’ll live, if they’ll finish school—but the lasting charm of Babitt’s film is found in that first step forward.

“But I’m A Cheerleader” is currently streaming on the Criterion Channel, Vudu Free, and several other services.

The Jungle Book: A Perfect Soundtrack to Any Drug Addiction